As the devastating impacts of climate change become a fact of life, governments and companies across the globe are racing to achieve net-zero emissions targets. Technological innovations will be major contributor to whether these targets are achieves, so it shouldn’t come as a surprise that climate investments are on the upswing.

SVB recently released its second annual Future of Climate Tech Report, followed by a webinar “Addressing global warming and Climate Tech’s goal for a better world”. I spoke with thought leaders to take a deeper dive in the major findings of the report:

Watch a quick-take on where we are today with achieving net-zero emissions targets. Watch the full webinar on-demand now.

This blog highlights topics discussed during the panel discussion.

What makes the climate tech rally different from cleantech 1.0 in 2008?

"During the first wave, part of the question was, how do you get more people involved? But today, we see the effects of a changing climate and the need to do something about it feels visceral."

So there is more of a social license granted to entrepreneurs, investors, policymakers helping to solve the problem.

Emily Kirsch: From an investor standpoint, back in 2008, climate tech investing was all about [Department of Energy] loan guarantees and grants. And in 2022, climate tech is now in every layer of the capital stack.

What technologies have become an essential part of reducing greenhouse gases, and what tech still requires development?

Mateo Jaramillo: Over the past decade, we've seen a 70% to 90% reduction in the cost of wind and solar, such that it is the cheapest form of electricity almost everywhere globally today. As for tech that still requires development, Form is developing a very low-cost, long-duration storage technology that enables weather-driven power generation resources like wind, water and solar to close multi-day or even seasonal energy gaps. That’s an area that’s among the hardest to decarbonize and the technology is still being developed.

What can founders and investors learn from the hype curve described in SVB’s report?

Kelly Belcher: The hype curve shows us, on the left, which technologies have moved from the innovation phase, which includes very early-stage companies with high potential, up to, on the right, technologies that have been invested in for a long time and are in a state of productivity. On the left are electric vehicles, battery storage, supply chain, solar, biotech and wind, which we believe will become very productive in the next two years.

We see a two-to-five-year timeline for technologies like precision agriculture, alternative proteins and tech to become productive. Then there are biofuels, carbon capture systems and nuclear, which will take longer to scale.

Emily Kirsch: As it relates to the hype curve, corporates have an interesting issue. They are playing an interesting role. Recently Meta, Alphabet, Shopify and Stripe announced a $1 billion, eight-year fund to pull carbon out of the atmosphere. Does that move technologies further along the curve than they would have moved without them?

Exits and M&A – what do they look like for investors and entrepreneurs?

Emily Kirsch: At Powerhouse Ventures, we expect most exits to be acquisitions versus going public. M&A is increasing, and the stage of the company that’s getting acquired is getting earlier and earlier.

Mateo Jaramillo: The way the capital markets have evolved, there are many ways to provide liquidity to people who need it without becoming public or going through an acquisition. For a company like Form, which is very hardware-focused, what’s important is thinking about how to catalyze that low-cost capital we need to build projects.

Why has SPAC activity become more prominent in the climate tech space?

Kelly Belcher: Companies that don’t have traditional financial metrics are hard to value. So going into an IPO setting can be a challenge to price. The SPAC absorbs some of that friction.

“It comes down to a supply and demand issue. There was so much demand from investors for these companies and there was very little supply."

What’s it like to be a climate tech founder today? What do investors look for when investing?

Mateo Jaramillo: In the climate tech investing space, the full capital stack is ready and activated. Funds are formed and they’re dispersing money. You don’t have to wonder whether there will be larger tranches of capital down the line.

Emily Kirsch: Some people will take big swings at technology that has a five- to 15-year path to commercialization. And we need those types of big bets. But with existing technology, we can get to 90% decarbonization of our electricity sector. At Powerhouse Ventures, our thesis is to get proven tech that involves no tech risk to scale globally as quickly as possible.

What is the role of public vs. private capitalization?

Kelly Belcher: Our best guess is that we need to spend close to $6 trillion to reach the 1.5C global warming target. Who’s going to fund that? A mix of private lenders, like private equity providers and venture capitalists. And there will be some work in the capital markets--some public equity listings, some governmental development institutions.

Emily Kirsch: Another big difference between Cleantech 1.0 and 2.0 is the role of government. The government was the one subsidizing and creating new markets. Now you have tech behemoths that have the purchasing power to accelerate technology development.

Can you discuss rare earth metals and the problems they pose?

Mateo Jaramillo: Rare earth materials are usually involved in making permanent magnet motors and primarily come from China. But other materials, like cobalt, which go into lithium-ion batteries, are also crucial. They come from the Congo, which is a very conflicted area. The entire storage industry is trying to figure out how to get cobalt out of its batteries. But mining has not undergone any significant inventions for a long time. So there’s a lot of activity trying to create new techniques and tools. In the end, however, it’s still an extractive industry.

Are there technologies that are being ignored because of their lack of ROI?

Mateo Jaramillo: I think the money is there if you’re going after big markets.

Emily Kirsch: Agreed. My one pet peeve is if the focus is only on emission reductions that misses adaptation. Addressing the impacts of the climate crisis that we’re already experiencing is absolutely necessary.

Kelly Belcher: A good example is carbon capture. Do these technologies generate massive financial returns? Probably not. But are they shareholder-driven? Absolutely. If you’re an upstream oil and gas producer and you’re not sequestering your emissions, your shareholders will request that you do so.

Where do you see pushback? Are there other important issues?

Kelly Belcher: One of the biggest pushbacks we get in the climate tech space is jobs. While what we're doing is great for the environment, what about the massive loss in talent and employment? But our numbers show that electrification and renewables will create many manufacturing, construction and project development jobs.

Mateo Jaramillo: Every climate tech company needs to be involved in policy somehow. I don’t care how early you are. Find the right way for your company to be mapped into the policy conversation.

A big thank you to our guest panelists and moderator for their participation in the event. For a deeper dive into the report, download The Future of Climate Tech and watch the webinar.

If you’re interested in learning more how SVB supports Climate Tech companies from start up to corporate banking, visit Cleantech and Sustainability webpage and contact us.

To learn how SVB supports large-scale Climate Tech infrastructure projects like wind and solar, visit the Project Finance webpage and contact us.

Written by
Kelly Belcher
Kelly is responsible for development of new business, strategy and oversight as well as cultivating the energy tech ecosystem throughout the Climate Tech global practice.
Sign up for insights from across the innovation economy
Subscribe now

The Future of Climate Tech 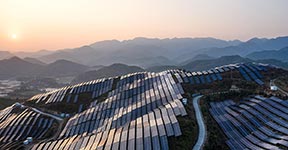 Jonathan Norris
Read more
You are now leaving Silicon Valley Bank (SVB)
You will be directed to a different website or mobile app that has its own terms of use, visitor agreement, security and privacy policies. SVB is not responsible for (and does not provide) any products, services or content at the third party site or app, except for products and services that carry the SVB name.
I understand, let's proceed Stay on SVB.com