As 2021 ended, SVB looked back on the unprecedented investments and exits across the main healthcare industry sectors: biopharma, healthtech, dx/tools and device.

I invite you to download a complimentary copy of the SVB Healthcare Investments & Exits 2022 edition covering data from the entire year of 2021.

This blog features a high-level overview of seed and series A by subsector/indications and a summary of exits and predictions for each in the coming year.

Investors double down on healthcare innovation

As discussed in my last blog covering 2021 mid-year investments and exits, Covid-19 has caused an unprecedented change in the healthcare industry resulting in massive disruption across all healthcare sectors. That investment storyline remains true across the entire year of 2021. Scientists, innovators and healthcare experts are problem-solving and inventing rapidly. Venture investors are eager to be at the forefront of innovation and growth, often doubling downing on perceived portfolio winners.

All this momentum has turned 2021 into the largest healthcare fundraising year ever ($28.3 B), surpassing 2020's record of $16.9B and nearly tripling the capital available just two years ago.

VC fundraising will likely slow down as most firms raised new funds in the last 12-18 months. These investors will focus on investing their recently closed funds, likely at a slower pace than 2021.

"50% of all VC-backed US healthcare companies that raised rounds in 2021 have a banking relationship with SVB."

Biopharma: Investments strong in 1H but slow in 2H

Biopharma led the seed/series A charge in healthcare for the year with $7.9B in VC investments across the US and Europe. Seed/series A dollars and deals increased significantly. Activity remained strong throughout the year, although overall investment in biopharma decreased each of the last three quarters in 2021.

We were amazed to see recent seed deal sizes regularly totaling $10-$20M, blurring the line between how the market defines seed and series A deals. 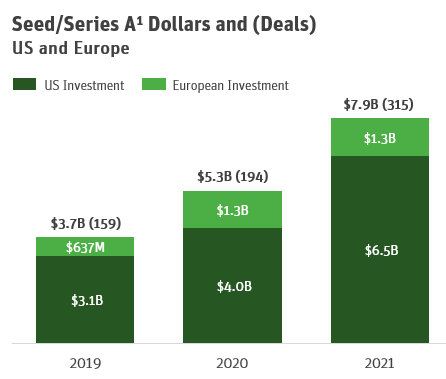 Take a deeper dive on page 8 of the report to look at orphan/rare and autoimmune subsectors/indications and page 10 and 11 to see active investors and investment activity by geography.

Private M&A activity dropped to the lowest level since 2013 while IPOs surged to a record 92 deals, although post-IPO performance was significantly poorer than the previous two years.

There will be less investment in the sector as crossover investment activity in mezzanine financings will continue to decrease, impacting the size and number of these pre-IPO financings. This will also result in lower valuations for series B and later deals. We think IPO activity will be down about 50% (50 + IPO), favoring companies with a differentiated but straightforward story and strong insider syndicate. M&A should pick up in 2022 but will focus more on newly public companies already trading at a discount as well as private pre-clinical deals.

70% of all VC-backed US healthcare companies that raised rounds greater than $40M in 2021 have a banking relationship with SVB.

HealthTech is taking patient care to the next level. Seed/series A deals more than doubled year over year. The average deal value increased from $4M (2020) to $8M (2021), driven by 11 $50M deals, with six of these deals focused on clinical trial enablement technologies. 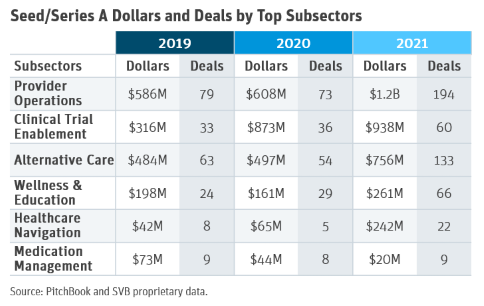 HealthTech exits hit an all-time high. Post-IPO performance was down, likely because of the lofty valuations in private financings and the downward pressure from poor performing de-SPAC transactions in 2021. The M&A market was strong, with three $1B+ private M&A and another 10 publicized $200M+ deals.

2022 will be the year of M&A for healthtech as we anticipate massive consolidation. Investments will be healthy but not at 2021 levels. This will create many acquisition opportunities as companies look to enhance their product offerings, expand their reach to other markets or acqui-hire for talent and/or clinicians.

Dx/Tools investment hit $1.1B. Seed/series A deal count was up significantly, doubling the deal pace of the last two years and buoyed by the ongoing investment activity from the UK. 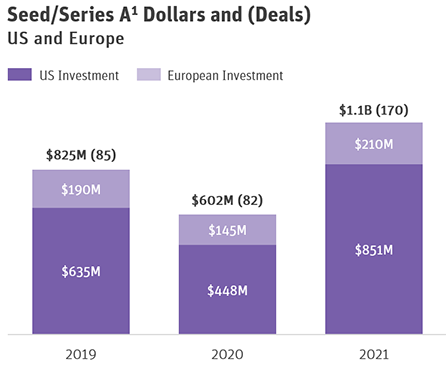 Dx/Tools saw record numbers of IPOs and M&A. However, pre-money IPO values were down, and average post-IPO performance was mixed, with US IPOs down significantly. M&A activity in 2021 yielded the best upfront deal multiples (5.3X) we have seen in the past four years.

We estimate another 10-15 IPOs in 2022, but at lower valuations. Private M&A will remain strong with 20+ deals in 2022. We will monitor the ability of highly valued private dx/tools companies to achieve an exit in 2022.

Device: Extraordinary circumstances brings about $1B in investment for the first time

The increased demand for monitoring patients outside the hospital setting has become critical in today’s world. 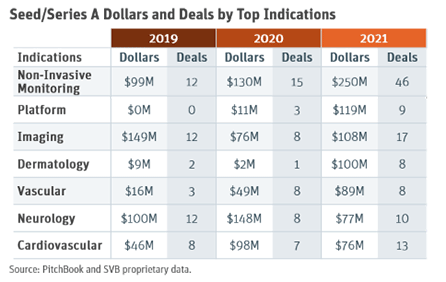 Device also had a record number of IPOs and the most private M&A since 2013. Average post-IPO performance was up +2% but down significantly from the last three years. In M&A, we currently have the most diverse acquirer base we have even seen. Upfront values in M&A were up in both 510(k) and PMA pathway companies.


"75% of all VC-backed healthcare IPOs since 2020 have a banking relationship with SVB."

Investment will likely decline as non-venture investors slow down mezzanine investing. The IPO window will remain open for big market stories with early revenue traction, leading to an estimated 10-12 IPOs in 2022. Pre-revenue companies or 510(k) deals with burgeoning revenue will find it challenging to go public. M&A activity will stay hot, as a diverse set of acquirers compete for the top deals.

There’s much more to discover in the report including post series A investment, top investors across subsectors/indications, an entire section dedicated to computational biology on pages 24-27 and multiple charts and analyst commentary.

Where does SVB come in? We live and breathe life sciences and healthcare.

Learn more about how we support companies in their efforts to advance healthcare. Explore our life sciences and healthcare practice and contact us.

Written by
Jonathan Norris
Jonathan Norris spearheads strategic relationships with many healthcare VC firms and serial entrepreneurs for SVB.
Sign up for insights from across the innovation economy
Subscribe now

Aledade, a healthtech company that is helping physicians across the country deliver better care for their patients. Read how Aledade accelerated their growth and expansion with SVB's customized financing solutions.

The views expressed in this column are solely those of the author and do not reflect the views of SVB Financial Group, or Silicon Valley Bank, or any of its affiliates. This material, including without limitation the statistical information herein, is provided for informational purposes only. The material is based in part upon information from third-party sources that we believe to be reliable, but which has not been independently verified by us and, as such, we do not represent that the information is accurate or complete. You should obtain relevant and specific professional advice before making any investment or other decision. Silicon Valley Bank is not responsible for any cost, claim or loss associated with your use of this material. All non-SVB named companies listed throughout this document, as represented with the various statistical, thoughts, analysis and insights shared in this document, are independent third parties and are not affiliated with SVB Financial Group. All companies are independent third parties and are not affiliated with SVB Financial Group.

Mental Health Awareness: It’s OK not to be OK

Michael Descheneaux
Read more
You are now leaving Silicon Valley Bank (SVB)
You will be directed to a different website or mobile app that has its own terms of use, visitor agreement, security and privacy policies. SVB is not responsible for (and does not provide) any products, services or content at the third party site or app, except for products and services that carry the SVB name.
I understand, let's proceed Stay on SVB.com