This article is written by Ben Johnson, head of life sciences in the early stage practice, and Dhruv K. Vig, PhD and senior associate, on the life science insights team.

Surprising to some, the analysis suggests that accelerators and incubators do play a significant role by providing early-stage support and sometimes a follow-on round.

The level of significance depends somewhat on the subsector. Here is the breakdown by subsector based on the 2017–2018 data: biopharma 21%, medical device 27%, digital health 36% and diagnostic/tools (Dx/tools) 46%. By comparison, about 33% of all US startups that successfully raise Series A funding go through an accelerator or incubator.

Beyond financing, startups tend to seek different benefits from an accelerator/incubator, also depending on the subsector. For example, young biopharma and Dx/tools companies value access to physical resources, primarily state-of-the-art labs and equipment. Medical device startups benefit from opportunities to collaborate with their peers on next-gen ideas. Digital health companies typically find joining an accelerator to be a useful way to build a network across sectors and industries, including consumer internet.

Overall, life science and healthcare startups are remaining in accelerators longer to take advantage of community support, talent and resources and as a result may become more attractive investments. For example, LabCentral and JLABS (the Johnson & Johnson incubator) house several companies that have closed Series A rounds. 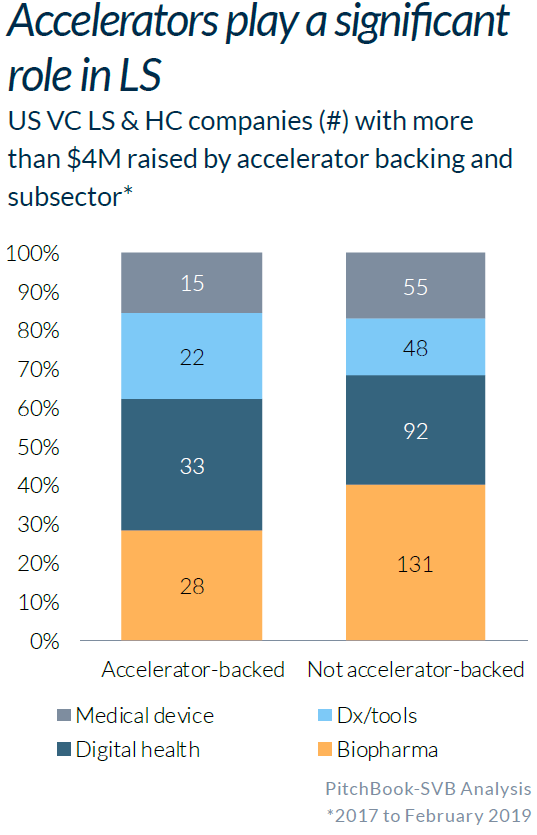 While there may be fewer new accelerators overall, the most successful ones are expanding to new locales beyond the established hubs in California and Massachusetts. JLABS, launched several years ago in San Diego, now has more than 100 active companies in San Diego, Houston and New York and has even expanded to China and Canada. BioLabs has been on a tear in the past year, opening offices in Philadelphia, Princeton, Durham and Los Angeles and a second office in Boston. TechStars is partnering with UnitedHealthcare for a new Minneapolis accelerator, due to open later in 2019 with 10 companies. The focus is on innovations in payer and care provider services involving digital health and wellness solutions. 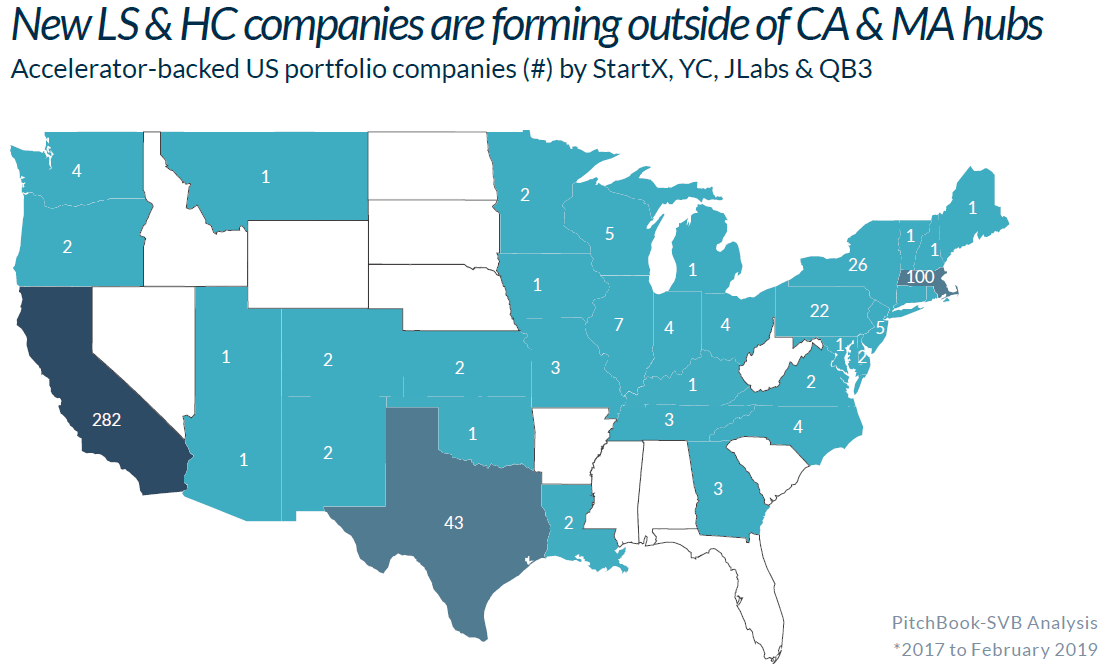 As accelerators and incubators are drawing life science and healthcare startups to some new locations, we are also seeing a correlated rise in first-time funding sources in those places. For example, New York, Pennsylvania and Texas have a relatively high number of new life sciences and healthcare companies.

These are the ingredients for growing a healthy ecosystem. Cities and states are encouraging new activity to help spur their innovation ecosystems and create jobs. IndieBio, based in San Francisco, is expanding to New York City for its second location later this year. The accelerator is receiving a $25 million inducement from New York State. Separately, New York City property owners are outfitting buildings for cutting-edge lab spaces.

In some cases, life science and healthcare accelerators hold the promise to help a region’s ecosystem grow in size and impact by extending the broader culture of innovation and promoting new sources of economic development.

Healthcare industry sectors: An overview of 2022

After a decade of experience in commercial and private banking, Ben joined SVB in 2007 to lead the technology and life science effort in the State of Minnesota, and in 2010 began focusing exclusively upon life science companies across the Central United States, and led SVB’s effort in this region through 2017. During this time, Ben reviewed thousands of business plans and deployed over $1 billion of venture debt to hundreds of companies.

Ben resides in the Minneapolis area, where he enjoys spending quality time with his family in a variety of outdoor and sporting activities. In his spare time, Ben seeks balance through DIY projects, he has become increasingly drawn to both history and economics, and is officially addicted to the Bloomberg Surveillance podcast. Ben also enjoys singing/playing songs on the guitar, and enjoys connecting with others related to all things music.

Ben has been a long-time supporter of Habitat for Humanity and Feed My Starving Children, and has been active in advocating for the health of Minnesota’s innovation climate.
You are now leaving Silicon Valley Bank (SVB)
You will be directed to a different website or mobile app that has its own terms of use, visitor agreement, security and privacy policies. SVB is not responsible for (and does not provide) any products, services or content at the third party site or app, except for products and services that carry the SVB name.
I understand, let's proceed Stay on SVB.com