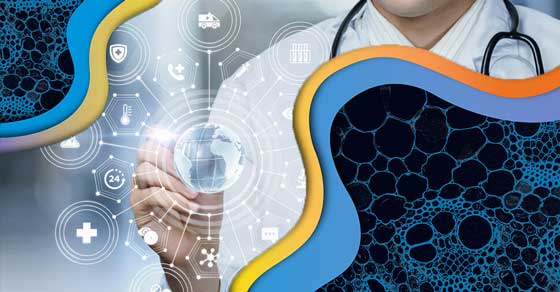 The worldwide spread of the COVID-19 pandemic has cast a spotlight on a new reality for the healthcare and biotech industries: thinking globally can be critical to speeding up innovation and discovery, and to seizing the biggest opportunities.

From sources of capital to clinical trials and therapeutics, the globalization of the industry is well underway. “Most health issues go across borders,” said Christian Gormsen, CEO of Eargo, a U.S.-based maker of hearing aids. Speaking on a panel at this year’s Innovate Next summit, hosted by Silicon Valley Bank, he added: “It doesn't matter what country you’re in. The underlying root cause of healthcare is borderless. It's so important that companies have that perspective. We should create solutions that work everywhere.”

The panel of experts convened by SVB discussed the opportunities and challenges innovators and investors can expect when doing business across borders, along with strategies for success. Here are some highlights of the conversation. (Click here to watch the full video.)

The importance of global trials

Clinical trials that are global are likely to yield the most robust data and the fastest results. Indeed, conducting research across countries has opened up enormous opportunities for companies that were once limited to domestic patient data. By tapping vast new populations, they can now bring a medicine or treatment to market far more quickly.

For example, Mereo Biopharma Group, a U.K.-based biopharma company that specializes in rare diseases, has been holding medical trials in China where it could find a sufficient number of patients most quickly. “There’s a patient population of 80,000 in China versus 55,000, in the US and Europe,” said Denise Scots-Knight, CEO and Founder at Mereo BioPharma. “This could really speed up enrollment in the study, which is one of the key challenges with rare disease programs.”

Oncology is another field that’s poised to benefit greatly from global trials. The population of oncology patients in China is larger than the total number of patients in Japan, Europe and the U.S. combined. For Beijing-based BeiGene, which develops immuno-oncology drugs, running trials in China is a way to significantly speed up time to market. “If you think about potentially accelerating timelines six months to a year, not only is this good for the patients who would access innovative medicines earlier, it's also generating sales one year earlier,” said Guillaume Vignon, senior vice president of business development at BeiGene. “That's huge value creation.”

Global trials also facilitate the gathering of a richer and more diverse dataset, allowing drug developers to conduct more thorough research and come up with a better end product. “If you're really able to tap into those clinical centers and run high quality trials … you’re also going to be able to explore more indications,” said Vignon.

At the same time, sources of capital for healthcare and life sciences companies have become increasingly global, creating new options for entrepreneurs and companies who think strategically about their investors. Deciding whether to be listed on the NASDAQ, London Stock Exchange, or the Stock Exchange of Hong Kong, for example, can have huge implications for a company's value. And while companies have traditionally located their headquarters in the country in which they choose to go public, the pandemic has made location less critical, freeing companies to look beyond their borders. “It used to be that if you had a European base and you wanted to go to NASDAQ … in many cases, you had to relocate your company to the US,” said Scots-Knight. “This virtual world we're living in has actually leveled that playing field.”

Her company, Mereo, initially went public on the London Stock Exchange Alternative Investment Market. But as its largely UK-based investors struggled, Mereo opted for a reverse merger and listed on the NASDAQ. Being a dual listed company added layers of complexity to overall operations, as Mereo faced compliance with two sets of regulations and different reporting dates. After a round of financing in June 2020, the company became 90% U.S. shareholders and in December traded its last share on the AIM. “If we were doing it all again, we would definitely say to European companies and UK companies in particular: ‘Don't take that step. Do your private financing. Do your crossover round with U.S. investors, and go straight to NASDAQ,’” said Scots-Knight.

I-Mab Biopharma, which develops drugs for immuno-oncology and autoimmune diseases also listed on the NASDAQ, despite being headquartered in Shanghai. Choosing the NASDAQ over the Hong Kong market made sense from a business perspective, said Weimin Tang, head of global business at I-Mab Biopharma. “To explain the value of those assets to local investors in Hong Kong is much more difficult than to do it in NASDAQ, because the U.S. market is very mature,” he said. At the same time, companies listed in Hong Kong tend to fetch higher valuations than peers listed on the NASDAQ, which can become a problem for a company that initially goes public in Hong Kong and later decides it wants to tap U.S. investors or U.S. markets. “You wouldn’t like that to come back and bite you,” he said. “The U.S. will not give you the same value as in Hong Kong.”

As COVID spread throughout the globe, China opened up for a while, and the US and Europe closed down. If you're a global organization … that was an advantage for you.

Companies that were once focused on hubs like Silicon Valley and Cambridge’s Kendall Square have been scouring the globe for talent – and finding it. And as the pandemic has made remote work commonplace, the trend has only accelerated. “In the past, we thought it was only in the Bay Area and Kendall Square that you would find great innovation,” said Vignon. “Across Europe and China, there's another Bay Area. Being connected to those innovation hubs is helping in deal making, but beyond that, it’s helping ideas and innovation in general.”

What’s more, having a global footprint has helped companies mitigate some of the risk and uncertainty that stemmed from the global pandemic. For example, I-Mab, which has conducted trials in the U.S. and China, has been able to shift the focus of its research to whichever region was less impacted by the pandemic. It was hardly the only company to enjoy the benefits of being global. “As COVID spread throughout the globe, China opened up for a while, and the US and Europe closed down,” said Brad Loncar, CEO of Loncar Investments. “If you're a global organization and have not just business offices, but research capabilities all around the world, that was an advantage for you.”

For some companies, the ability to operate globally has also been a risk mitigator for critical supply chains. At the start of 2020, when China was hardest hit by the pandemic and supply chains froze, Eargo, which relies predominantly on Asian suppliers, was able to turn to buffer inventory in the U.S. to make it through those months. "When you build a supply chain, you will always have single points of failure,” Gormsen said. “But you’ve got to have contingency plans in play all the way through.”

Watch a replay of this discussion and other sessions from Innovate Next 2021 here.

Written by
Kate Walsh
Kate is managing director of SVB's Life Sciences & Healthcare practice, based out of Boston, covering Biopharma, Dx, and Tools for the NE and NW markets.
Sign up for insights from across the innovation economy
Subscribe now

Mental Health Awareness: It’s OK not to be OK