The role of semiconductors in bringing forth next-generation technologies 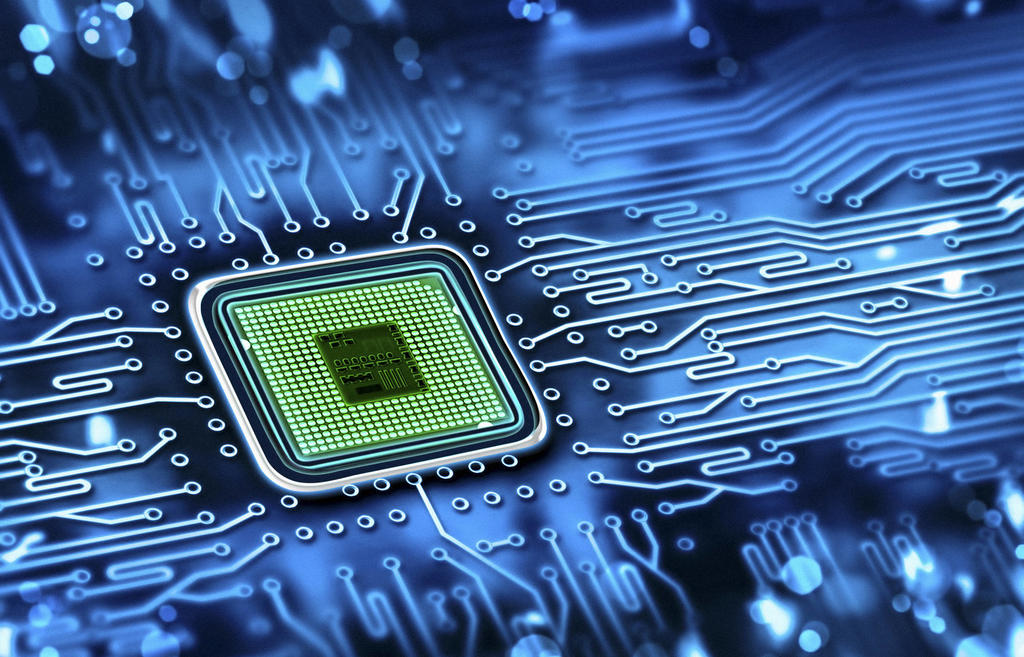 We are in the age when sci-fi is fast becoming sci-fact. With the progress of drones, robotics, autonomous cars, artificial intelligence (AI) and many other fascinating technologies, our minds are constantly stimulated into believing that the future is closer than we think. It has fascination and appeal. One crucial technology underlies all of these inventions, without which they wouldn't be possible: the semiconductor. Perhaps the semiconductor is not as glamorous as the things it powers, but its evolution is crucial to innovation and technological progress. That's what gave Silicon Valley its name, after all.

In general, the number of dollars invested in semis is increasing, while investment deal count is declining, meaning larger raises - a trend that is occurring across most industries. The US accounts for the majority of the deals, representing more than half the deals in 2018, with Europe and Asia splitting the remaining ones.

Breaking down the deal count by stage, we see much more company formation, represented by angel and seed funding. What is driving company formation and funding? A few things: First, the AI chip craze. Second, the Internet of Things (IoT) and sensors, which remain among the main areas receiving investment, albeit raising fewer dollars than their AI chip counterparts. Broadly, the consolidation of the larger chip companies and their slower pace of innovation, coupled with the need for new chip technologies to power the aforementioned frontier tech industries, have spurred the recent uptick in semiconductor investment. 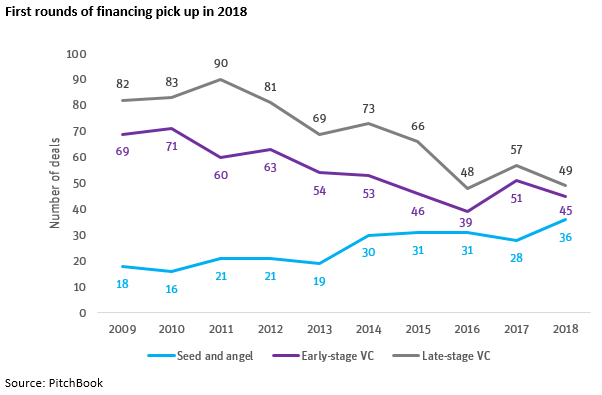 It should come as no surprise that the leading investor over the previous 10 years is Intel Capital, the corporate venture capital (VC) arm of Intel. Other top corporate investors include Samsung, Qualcomm, Microsoft and Applied Materials. On the institutional side, Walden, Eclipse Ventures, Lux Capital, New Enterprise Associates, Sutter Hill and Capital-E have made a significant number of investments. Interestingly, SoftBank has also begun investing in companies in the space.

Even though the US represents the majority of semiconductor deals, the top 15 well-funded startups are from a range of countries: six from the US, six from China, two from the UK and one from South Korea. In addition, we are seeing nontraditional investors, such as sovereign wealth funds, family offices and cross-overs, coming in and investing - not just in semiconductor companies but also in the rest of the semiconductor ecosystem.

The chart above shows the recent rapid increase in the number of AI-based chips, recently overtaking the historical leader in application-specific chips: IoT. What is driving this increase? Two words: deep learning. The deep-learning big bang was fueled by semi company Nvidia in 2009, when the company's graphics processing units were used to train neural networks, a fundamental technique underlying "Artificial Intelligence" and "Machine Learning". Deep learning is the driver behind the majority of recent technological advancements - robotics, digital assistants and autonomous vehicles. Application of deep learning really started to heat up in 2011 and 2012, leading to the first peak of investment in 2012. Companies such as Wave Computing, Groq, Graphcore (UK), Habana (Israel), Mythic, Esperanto, SambaNova and Cambricon (China) - all have raised large rounds of financing. It seems like every time you turn around, a $50 million–plus round is raised.

"As application workloads cycle from software to purpose-built hardware, the increase in semi activity will continue. The economic and productivity benefits of this shift are meaningful, and firms across many industries will continue to invest in the space."
- Justin Butler, Eclipse Ventures

Perhaps the best example of AI-specific chips as a potentially lucrative investment endeavor was the acquisition of Nervana Systems by Intel for $408 million in 2016, with the company having raised only $24 million in funding at the time the deal was completed. The year Nervana Systems was acquired (2016) was the highest for exits, with the number slowly dropping off since. The lack of new business formation in the early part of this decade has reduced the target pool. This intuitively makes sense, as more activity is happening at the early stage, with the number of late-stage companies dropping drastically. With this pickup in company formation, we expect a backlog of prospects to be created over the next 18 to 24 months.

While companies mature, we won't see a lot of exit activity. With consolidation at the top of the food chain, the number of large semi companies is small compared with a decade ago. This means fewer public acquirers. The irony is that the lack of public semi companies is one of the reasons why there is healthy funding activity at the early stage, as investors realize the lack of innovation taking place in a smaller and smaller number of public companies. Public companies also can't steer too far away from their core offerings, which means research and development into highly experimental chips for things like quantum computing is better done by startups.

This does pose a bit of a conundrum for investors, as a smaller pool of potential acquirers means the importance of betting on the right company, technology and application is all the more vital. On the positive side, the lack of early-stage funding from the mid-2000s to the mid-2010s probably means the few remaining large semi companies have a desire (and the need) to acquire companies in the short term. So, while we might see a slight uptick in M&A activity, the number of IPOs will remain low for the foreseeable future.

Perhaps the wide variety of technologies - such as drones, smart speakers, digital assistants, autonomous vehicles, virtual and augmented reality and more - under development by the likes of Google, Facebook, Microsoft, Apple and Amazon will see one or all of them emerge as the next wave of acquirers. Companies like Cisco and other OEMs have vertically integrated into semiconductor development, so they might also join the list.

What I don't think will happen is an increase in activity from Chinese acquirers. They were in vogue a few years ago, when semiconductor firms in China were valued at nearly twice as much as their US counterparts, but that well is drying up fast (and perhaps has already dried up) with actions from the Committee on Foreign Investment in the United States (CFIUS) here in the US and the State Administration of Foreign Exchange in China. As is well chronicled, China is investing heavily in semiconductors, in both fabs and devices. Perhaps if the trade war eases, cross-border investments and acquisitions will increase, but I don't see that happening in the near future.

So what does the future hold for the semiconductor and the ecosystem?

From a technology perspective, I'm not worried about the end of Moore's law. New technologies - such as 3D stacking of chips, quantum computing and extreme ultraviolet lithography - all have the ability to extend semiconductor innovation and scale. We expect a wave of fabless gallium nitride (GaN) players to raise capital this year, with a focus on power management and high power radio frequency amplifiers. The benefits of GaN technology are speed and power, but issues in developing the technology remain. There is also a lot of interesting activity around fabless application-specific integrated circuits (ASIC) and services. Many startups working on the technology are bootstrapped, but SiFive is an example of a fabless ASIC player that has received institutional investment - approximately $50 million last year. Broadcom, owning much of the ASIC business, is opening the door for other smaller ASIC and services players.

On the funding side, I am optimistic that the momentum will continue. I expect to see corporates and the funds that focus on semiconductors still leading the way. I do think more traditional institutional investors will dabble. The one area of concern on the funding side is overseas investment in US companies. The new CFIUS rules require that nearly all incoming foreign semiconductor investments apply for CFIUS approval. This could add months to the fundraising process. While the early stage is as healthy as it has ever been, the one missing piece, at least for investors, is the state of the exit environment. I am bullish that the multitude of new applications will create new markets and entice a new wave of acquirers.

At SVB I work with many great semiconductor companies and investors in the space. If you would like to discuss this article or to hear about SVB's role in the industry, please drop me a line.

Reach out to the author, Joseph Restagno with any questions.

Joe Restagno is a Managing Director for Silicon Valley Bank. He has been with SVB eighteen years and has more than 30 years experience working with emerging growth technology companies. Joe manages a portfolio of FrontierTech clients in Northern California, mostly semiconductor companies, for which he is responsible for providing SVB's products and services. Joe is also SVB’s subject matter expert for the semiconductor sector.

Prior to joining SVB, Joe was Vice President at GATX Ventures\Meier Mitchell & Company, a specialty venture debt provider, where he was responsible for credit, portfolio management, business development and syndications.

Joe got his start in venture lending at Equitec Leasing, one of the original venture equipment lending and leasing firms started in the miid-1980's.

He earned a Masters in Business Administration from The University of Notre Dame, and a Bachelor of Science degree in Accounting at California State University Hayward (East Bay).
You are now leaving Silicon Valley Bank (SVB)
You will be directed to a different website or mobile app that has its own terms of use, visitor agreement, security and privacy policies. SVB is not responsible for (and does not provide) any products, services or content at the third party site or app, except for products and services that carry the SVB name.
I understand, let's proceed Stay on SVB.com