When the iPhone debuted in 2007, it kicked off a revolution. An entire ecosystem of digital goods and services started to emerge, built upon the smartphone platform. Through smartphones, laptops and specialty sensors like LiDAR and SA, more data is being collected than ever before.

By 2025, the International Data Corporation forecasts the global volume of data will grow to 181 zettabytes. (One zettabyte equals one trillion gigabytes). To put this growth in perspective, the world’s collective internet usage reached one zettabyte in 2016, according to Cisco. In 2011, Marc Andreessen coined the phrase “software is eating the world,” while at the same time, Peter Thiel famously stated, “We wanted flying cars, instead we got 140 characters,” and they were both right. Historically software has been primarily successful at consuming clean structured data, not the noisy, unstructured data inhabiting most of our world.

Massive physical industries (like construction, manufacturing and agriculture) have been slower to capture and harness data at scale. This is changing rapidly thanks to several enabling influences.

Sensors
Sophisticated sensors and related components have become more affordable. For example, the iPhone 12’s LiDAR sensors use semiconductor fabrication techniques to greatly reduce cost. Compared to a decade ago, the first three-dimensional LiDAR sensor, built by Velodyne cost $75,000. The technology has gone from the realms of large enterprise to the everyday consumer.

Cameras
The camera on the back of a smartphone has sparked the invention of apps like Instagram and TikTok. The same underlying technology that allows scientists to take satellite images of Earth from space also enables surgeons to perform medical imaging to treat their patients. Hardware-based companies and the data they capture are becoming both a commercialized product and training set for machine learning.

Access to intellectual property
IP is now open source. NASA releases its patents into the public domain via its technology transfer program. Stanford’s RoboTurk, Google’s ClearGrasp and Amazon’s TEACh have all released datasets on object manipulation and commands to encourage commercialization. 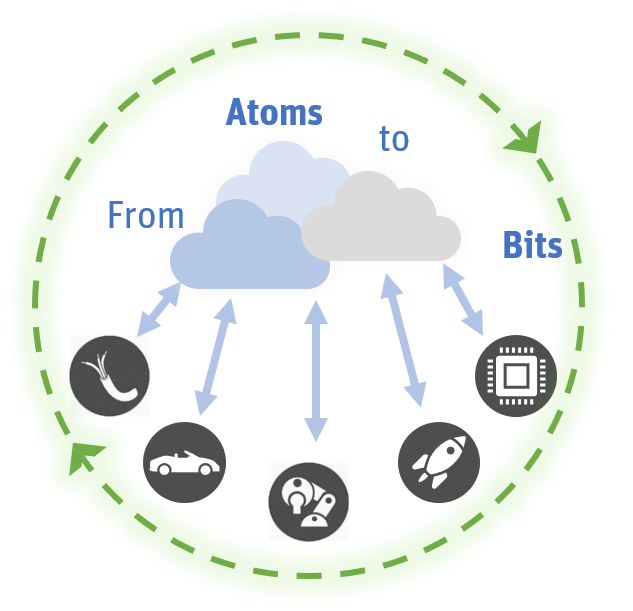 Defining companies working on deep tech technologies based on engineering innovation and scientific research, can be complex. So, to simplify matters, we’ve separated company profiles into three distinct data strategies: The Moonshot, The Pick & Shovel and The Wedge. Often firms fall squarely into one bucket while others will blur the boundaries. Each type of firm has a different relationship with data.

The moonshots
Moonshots typically take a long time to come to market. They are exploratory, trying to accomplish something that has likely never been attempted. If they do succeed, proprietary data can be captured that would have previously been unattainable. The private space industry has gone from science fiction to reality over the past two decades. Planet Labs (NYSE: PL) and Spire Global (NYSE: SPIR) have built successful business models providing satellite data to a variety of industries: agriculture, maritime, energy, environment and governments. Both companies spent years – with little to no revenue – building businesses that broke technological boundaries. Planet created a satellite constellation that could deliver earth imaging at a high refresh rate – the same imager viewed in Google Maps. The EU and US government use Spire Global’s climate data for weather monitoring. Moonshots have high capital expense barriers to entry but with the opportunity to further develop data marketplace offerings or partner with third parties.

The pick and shovel
Pick and Shovel firms are the infrastructure businesses necessary for deep tech to progress. They include specialized chip manufacturers, powering data processing for AI and machine learning applications. For example, Mythic is a startup focused on building small, yet powerful GPUs that enable devices for surveillance, manufacturing and automotive to have the computing power once reserved for cloud computing. Devices using this type of edge AI technology are at “the edge” – outside of the centralized data centers in the cloud. Companies supplying chips, sensors, algorithms, software, tools, subsystems and services are linking up via partnerships such as The Edge AI and Vision Alliance. Well-positioned Pick and Shovel firms will benefit from riding the ever-growing wave of demand for more data about our physical world.

No matter the data strategy, all three models are collectively focused on expanding opportunities for data extraction, data refinement and data distribution. Or better said, converting atoms to bits.

Progressing from atoms to bits

Data needs to go through three steps to derive actionable insights. Not all companies will require each step.

Execute
In 2021, more than 47 million people in the United States quit their jobs. Hard hit were durable goods manufacturers, wholesalers and retailers—industries that already incorporated automation technologies. Now, as companies feel the worker pinch, they are increasing their investment in automation and expanding its scope of operations. The benefits can be huge. Simbe Robotics Tally robot’s first use case was in February 2020, monitoring on-shelf availability (OSA). The more time the robot operates, the more its performance improves, a characteristic of technologies that use reinforcement machine learning algorithms. Tally can scan between 15,000-30,000 items per hour at 97% accuracy versus a human who would take a full week to do the same task at 65% accuracy.

Modify
In March 2020, at the start of the COVID-19 pandemic, Simbe Robotics observed, via data from its deployed Tally robots, out of stocks jumped to 11%. (A normal range is 3–6%). How much of this could be attributed to factors out of a store manager’s control? Of the out of stocks Tally detected, 20–30% were not related to lack of warehouse inventory, rather in-store inefficiencies such as delayed restocking.

Transform
As a company expands its network of customers, they can commercialize this data set further. Hardware companies are starting to get savvy about establishing data sharing agreements with their customers. In many cases, this can be a symbiotic relationship where data collected from a machine can be useful to a third party. The proceeds of selling this data can be shared by the robotics company and their customer.


The impact of smartphone advancement

The adoption of smartphones, advancement of the underlying technology, plus the addition of more and more features has exponentially increased the quantity and types of data collected. The smartphone has become a platform for previously unconceived or impossible-to-create applications. Many businesses like Uber, Lyft, Snapchat, Venmo and Niantic are solely reliant on the sophistication and prevalence of smartphones and the rich data they collect. For investors, this was a big draw as software applications could be developed fast, didn’t require significant capital expenditure and had a steep adoption curve (if successful).

With changes to data privacy, personified by Apple’s iOS 15 update, the accessibility of data and concerns around privacy have meant companies that solely rely on third-party data face significant risks.


Investors are beginning to recognize the advantage of companies having control over data collection, namely through solutions with an integrated hardware component.

As such, I expect the prevalence of integrated hardware solutions in market to increase as companies look to secure the process of converting atoms to bits. This includes tapping new data sources and expanding the types of data collected. Who knows what insights will come from converting atoms to bits, or who will benefit most from their critical insights, but I am confident that a world with more data to drive decisions, improve transparency or build general knowledge will be a better one.

AR/VR for the enterprise is emerging as its own ecosystem. In this blog, we’ll unpack some of the big headlines surrounding headsets and feature several founders innovating in this space.

1LiDAR - Light Detection and Ranging, is a remote sensing method that uses light in the form of a pulsed laser to measure ranges. SAR - synthetic aperture radar is an active sensor that first transmits microwave signals and then receives back the signals that are returned, or backscattered , from the Earth's surface.

The views expressed in this blog are solely those of the author and do not necessarily reflect the views of SVB Financial Group, Silicon Valley Bank, or any of its affiliates.

Ann Kim, Liz Cahill
Read more
You are now leaving Silicon Valley Bank (SVB)
You will be directed to a different website or mobile app that has its own terms of use, visitor agreement, security and privacy policies. SVB is not responsible for (and does not provide) any products, services or content at the third party site or app, except for products and services that carry the SVB name.
I understand, let's proceed Stay on SVB.com