I recently read a press release from the latest Intergovernmental Panel on Climate Change (IPCC) report, I was struck by the severity of human-caused climate change — global temperatures are expected to reach or exceed 1.5°C of warming over the next 20 years.

We now have a much clearer picture of the past, present and future of climate, which is essential for understanding where we are headed, what can be done, and how we can prepare.

Climate tech investment conversations are often centered around battery storage, electric vehicles and solar and wind energy alternatives. Yet, a critical component to understanding “where we are, and we are headed” is using space technology, as it can provide the most precise lens to our changing climate.

Learn more about Climate Tech and Space Tech and the synergies between the two markets.

Download SVB’s The Future of Climate Tech report for information on investments and opportunities advancing sustainability.​

Read the new report from Space Capital, The Great Climate Opportunity for more insight on how space tech is playing a foundational role in identifying climate markers. ​

Watch the Climate Opportunity video to discover how we need to look to space to help save the planet.​

Watch this short interview with Chad Anderson managing partner at Space Capital on CNN talking about The Climate Crisis.​

According to the IPCC report, we have a tiny window to mitigate the increasing rise in temperatures spurred by greenhouse gas (GHG) emissions. Technological solutions such as leveraging data from earth observing satellites– play a fundamental role in this mitigation, but they don’t appear out of thin air. This technology—often cutting edge, complex and unproven—needs to be funded.

Climate tech investments on the rise 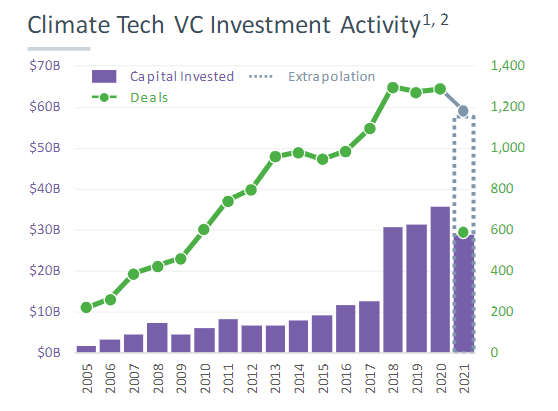 After the cleantech bubble burst over a decade ago, investors are coming back around to environment-orientated technology. Solar, wind, and storage, are competitive with fossil fuels on a cost basis, thanks in part to enabling technologies such as AI/ML and advanced manufacturing. According to the SVB The Future of Climate Tech report, investment into U.S VC backed climate tech is on pace for yet another record year, 50x the amount invested in 2005. Funding is sourced from the public and private sectors. At the federal and state level – government grants provide significant funding, U.S. Department of Energy and the New York Energy Research and Development Authority, to name a few. Traditional VC’s are adding climate as part of their strategy, while others, for example, Khosla Ventures, have been committed to Climate Tech for over a decade. Specialist investors such as E8 Angels, the non-profit Elemental Excelerator, and Chris Sacca’s Lowercarbon Capital (that just closed an $800M fund) have become increasingly prominent.

We cannot rely solely on climate tech solutions to solve the climate crisis. Behaviors need to change, including how we produce energy, grow our food, manage our water, conserve our forests, to name but a few. The required changes in behavior will impact people’s livelihoods, force businesses to reconsider how they operate and directly influence how countries set policies.

These changes won’t always be easy and or liked.

One way to encourage change is through hard data – that’s where space technology comes in. Satellite data can measure a host of key indicators for climate change, including atmospheric carbon, temperature fluctuations, ice sheet shrinkage and glacier retreat. 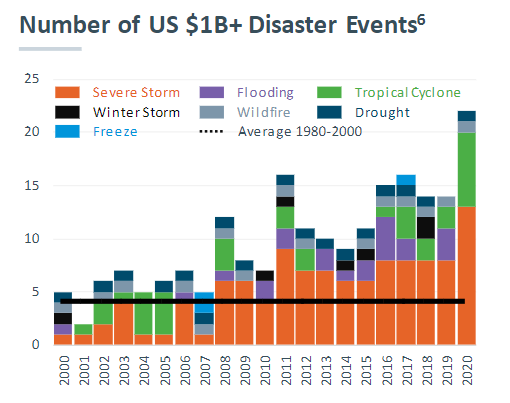 Silicon Valley Bank. (2021). Number of Us $1B+ Disaster Events. The Future of Climate Tech.

We can monitor national disasters, storm paths, water levels, drought severity and forest fires from space, providing greater public awareness about climate change.  According to the NCIE (National Centers for Environmental Information) which tracks billion dollar weather disaster, the U.S. has experienced an increase in billion-dollar, non-hurricane, inland flood disasters (i.e., from extreme rainfall, riverine flooding) in the last decade (18 floods during 2010-2019) than during the prior 3 decades combined. At the time of writing, Hurricane Ida has wreaked havoc on New Orleans, Philadelphia, and Greater New York, flooding areas across eastern seaboard. The frequency of disasters and the intensity have ratcheted up, the 0.2% (one-in-200-year) chance storm is the new expand into 1% (one-in-100-year) chance storm.

Obtaining accurate, detailed, and, most importantly, real-time data was a challenge to get historically. It requires the coordination of people and systems. Although Earth monitoring satellites have been around since the 1950s, recent advancements in data processing, storage and sharing have unlocked more sophisticated applications.

For example, helicopters affixed with cameras and sensors have traditionally mapped wildfires; this dangerous job is now assisted by satellites, at a safe distance. In 2020, researchers at the Pacific Northwest National Laboratory (PNNL) launched their REgion-Specific ecosystem feedback Fire model (RESFire). They harvest data from multiple satellites including the International Space Station’s ECOSTRESS, two U.S.G.S LANDSAT satellites and the European Space Agency’s Sentinel 2. Their models can track fire boundaries multiple times a day and forecast their path based on soil moisture observed through vegetation stress.  RESFire mapping has assisted firefighters battling the 2021 Bootleg Fire in Oregon and California’s Dixie Fire.

Startups are taking advantage of satellite-based fire mapping as well. Dellos Insurance uses a fire model built on satellite data and predictive AI to assess fire risk more accurately and provide insurance for lower-risk homes in fire-prone areas that previously would have been uninsurable. Capella Space applies Synthetic Aperture Radar (SAR) technology - developed by NASA - to capture high-resolution images through atmospheric conditions like clouds and smoke. One of many applications that can map natural disasters like wildfires and verify damage claims for the insurance industry.

Debates over water rights get contentious fast. On August 16th, 2021 the U.S. Government, for the first time, declared a water shortage at Lake Mede – one of the Colorado Rivers’ primary sources – for hydrologists and climate scientists, the news was no surprise. The upper Colorado River, which provides water to 40 million people and pumps $1 trillion into the U.S. economy, faces one of the longest droughts in the historical record. With primarily junior water rights, Arizona will lose about 18% of the state’s usual allotment from the Colorado River by 2022. Data will help policymakers and the public make smarter, fairer decisions on water allocation and usage. Through NASA Applied Sciences and its Food Security and Agriculture programs, including NASA Harvest, farmers can access useful information to make better decisions on their farms. Startups like Orbital Sidekick, among its many applications, can assist with water management for precision agriculture. Their hyperspectral sensors capture hundreds of color bands in the visible and infrared spectra to chemically fingerprint each target in a data set. This information can tell a farmer precisely what plants to water. 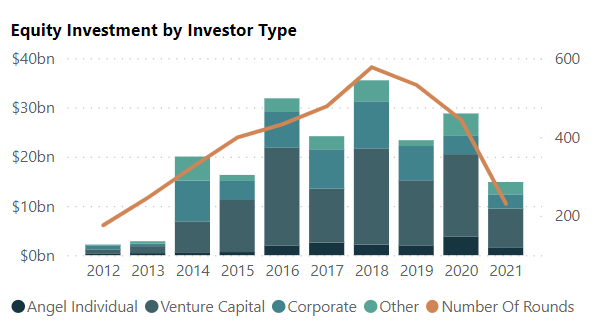 Funding the creation of technological solutions is a strategy in and of itself. Space companies tend to be hardware intensive with a significant amount of time required for research and development; it might as well be rocket science. Today, there are more options available with the interest coming from VC and the increasingly popular Special Purpose Acquisition Company (SPAC).

Summer 2021 was the summer of space SPACS. In August Spire Global went public via SPAC at a $1.6B valuation. In July, Planet announced plans to go public via SPAC at a $2.8B valuation. This is a milestone for satellites as a service, a business model Space Tech borrowed from enterprise software. Companies can rent fleets of satellites from providers at a fraction of the cost. NASA has awarded contracts to both firms to purchase data as part of a pilot program to evaluate private satellite data – a cost-efficient solution to replace aging government infrastructure.

Big deals for small launch providers. Astra went public via SPAC in July at a $2.1B valuation — on the heels of signing its first commercial launch contract with Planet Lab in May. Virgin Orbit (which successfully delivered 10 NASA satellites to orbit in January 2021) plans a $3.2B SPAC later this year. Rocket Lab went public via SPAC at the end of August with a $4.8B valuation; NASA’s approved the company’s Photon spacecraft for an upcoming Mars mission named ESCAPADE.

With this influx of venture capital and accessible public markets (via the SPAC), Space Tech companies have more leeway to develop a product or solution and bring it to market. Previously, reliance on grants (likely NASA) and government contracts was essential, but now with an abundance of capital means a faster rate of innovation and more companies are likely able to succeed.

A new space race has begun. Instead of nations vying for the first moon landing, the 21st-century version takes the form of global public-private partnerships geared toward monitoring our changing planet and making space-based research and commercial activity more accessible and affordable. Space tech provides vital data inputs for Climate Tech, and we will increasingly depend on precise and timely information to monitor scarce resources. When we look up at the night sky, we see bright specks of satellites, as Space Tech evolves, and heavy industries like mining will move off Earth, one day we may look out from a space station into the infinite frontier. SVB’s Frontier Technology team works with Space Tech companies from launch to orbit and beyond.

Written by
Ann Kim
Ann leads our Frontier Technology group and focuses on VC-backed high-growth companies in aerospace, transportation, robotics, IoT and virtual reality.
Written by
Liz Cahill
Liz Cahill is a senior research associate responsible for conducting data-driven analyses on the innovation economy that SVB serves.
Sign up for insights from across the innovation economy
Subscribe now

Amid a fragmented VC landscape, corporate venture capital firms and emerging managers increasingly see each other as valuable partners.