Short-dated foreign exchange (FX) forwards can be used to help minimize the FX rate uncertainty that arises between the time a global fund investment is contracted and the time the deal is funded.

US-based global fund (“Fund”), has raised USD capital and submits a bid for an overseas asset priced in euros (EUR). The bid is accepted and will be funded three to four weeks later. Simultaneously with the acceptance of the bid, the Fund may look to make a capital call for the USD needed or instead opt to draw down from the capital call borrowing facility closer to the funding date. Either way, the amount of USD needed will change between the bid acceptance date and the date the transaction is funded.

If the EUR appreciates, more USD will be needed as the price is fixed in EUR. As a result, the Fund would need to call for more USD capital to close the transaction. This is an undesirable situation, as investors will have paid more for the asset than originally negotiated, eating into internal rate of return (IRR) and other investment performance metrics.

On the other hand, if the EUR depreciates and a capital was made on the bid acceptance date, capital will need to be returned, as fewer USD will be needed for the acquisition. Economics aside, giving capital back presents and administrative and operational burden which many times renders the windfall more trouble than it’s worth.

According to the long-term average price for an at-the-money option in the EUR / USD exchange rate1, we can assign a 1 in 10 chance that the EUR may move more than 5.2 percent in either direction over a 4-week period2.

An FX forward is a contractual obligation to exchange one currency for another at a pre-determined fixed rate and specific date in the future.

The Fund agrees to pay €50.0M to acquire an asset from a European seller, which translates to $57.5M according to the spot rate on the day the bid is accepted. Funds will be remitted in 3 to 4 weeks.

Trade details
Notes: Conservative (longer) tenors are advisable as it better to draw down the trade early than having to roll it forward, as the latter involves a cash event. The contract rate for buying EUR forward is less favorable than the prevailing spot rate, resulting in a $150,000 difference between the USD needed for the forward transaction. The pricing of FX forward contracts is derived from three market factors: 1) spot exchange rates, 2) interbank interest rate differentials and 3) cross-currency basis swap rates. For EUR / USD forwards, because US interest rates are higher than EU interest rates (net of cross-currency basis), the hedger receives a less advantageous rate for buying euro forward versus spot.

The total USD needed to close an overseas purchase can change materially over a 4-week period, from bid acceptance to deal funding. According to an objective probabilistic framework, there is a 10 percent chance that on a €50.0M price tag, the price can change by more than $3.0M in either direction.

However, regardless of where the EUR / USD exchange rate is trading on the expiration date, according to the terms of the forward contract, the Fund will be selling $57.65M in exchange for €50.0M to make the investment. 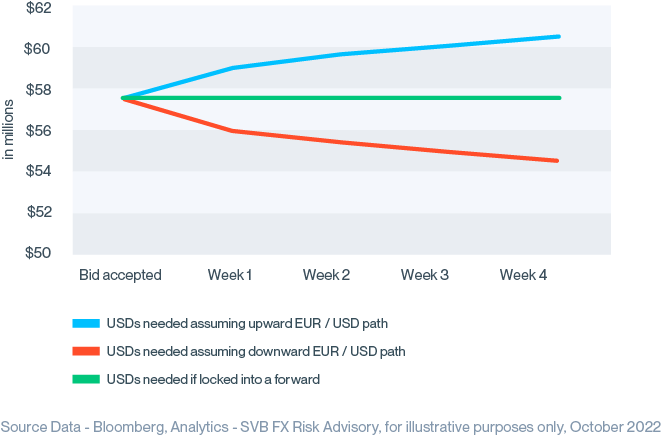 If you’d like to discuss your specific situation or for information regarding SVB’s tailored FX risk management services, reach out to your SVB FX contact or send an email to GroupFXRiskAdvisory@svb.com.

1 Assumes an average implied volatility, IV, for the EUR/USD exchange rate of 11.5%.

2 Projected loss determined by IVT x SQRT(T) x Z(.90), IV is implied volatility, is years, and Z is from standard normal such that P(Z<z).