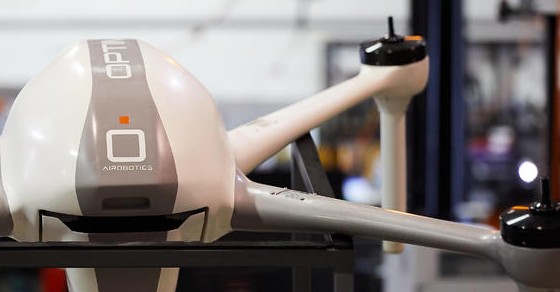 As I pull up my desk chair in my converted home office to read SVB’s State of the Market Report I think: Over the past 18 months, the fear and trepidation instilled by the COVID-19 pandemic has dissipated, and now I am left wondering how we got here and what is next. With respect to the frontier tech sector, this means access to capital. Companies in frontier tech have been raising massive equity rounds, followed by even more capital from special-purpose acquisition companies (SPACs), which has left them with healthy bank balances. In the current low-rate environment, this cash is earning no interest — which is a problem for management. Ironically, the same problem — low returns on capital — is a major reason why they have this cash in the first place: the flight of funds to high-return asset classes like venture capital.

In March 2020, the Federal Reserve tossed the proverbial kitchen sink at the financial markets, from emergency lending facilities to asset repurchase programs, aiming to support a quickly unraveling economy. The Fed was lauded — and rightfully so — for acting quickly and decisively. Over time, however, the unintended consequences of market intervention are beginning to show: pressure on inflation, asset volatility, and labor shortages. One intended outcome was to reduce the fed funds rate and create a vacuum of low-risk, yield-generating assets to encourage investors to quickly reallocate their assets toward traditionally riskier, higher-yielding asset classes. Venture capital thrived.

Although the number of new SPACs tempered over the last quarter, due in part to an uptick in regulatory oversite, SPACs continue to play an important role for companies seeking alternative funding options, particularly in capital-intensive sectors like frontier tech.


But venture capital couldn’t accommodate the full influx of cash, so financial innovators answered with the rebirth of the SPAC, a public shell company that targets private companies to take public via a reverse merger. The SPAC market experienced a sudden and rapid boom during this time, increasing from 86 IPOs in 2019 to 274 IPOs in 2020, according to Pitchbook. Referred to as the “blank-check boom,” these SPACs were able to swiftly capitalize and descend on the innovation ecosystem. Unlike traditional venture capital, SPACs provide direct access to highly liquid public markets for merged companies, giving investors an additional asset class in which to access high-potential, fast-growing technology companies. 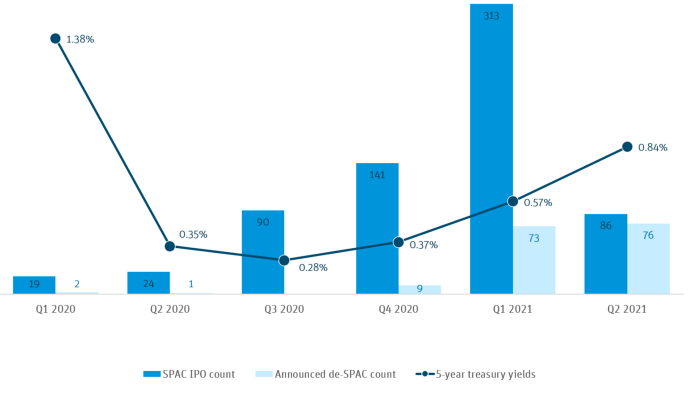 
Although the number of new SPACs tempered over the last quarter, due in part to an uptick in regulatory oversite, SPACs continue to play an important role for companies seeking alternative funding options, particularly in capital-intensive sectors like frontier tech. Historically, growth equity was difficult to access in this sector, especially at the size and cadence needed to scale hardware-intensive solutions. This meant that very few private companies raised the capital required to reach “escape velocity” to go public. Flash forward to today, and SPACs are filling the void.

Why the focus on frontier tech? Companies working on new and emerging technologies face an uphill battle to prove a reliable revenue stream, especially one that quickly covers their costs. For example, autonomous vehicle startups require significant technology development, supply chains, testing and manufacturing facilities plus distribution channels. For an autonomous vehicle company, producing a minimum viable product can cost millions. Early in a frontier tech company’s life, an outsized amount of capital is allocated to developing the technology, with little going toward growing revenue. SPACs provide frontier tech startups the follow-on capital to commercialize and scale their offerings in a single financing event.

Unlike traditional IPOs, SPAC merger filings can include forecasts (usually for five years) that often show “hockey stick” growth — a trajectory familiar to venture investors who understand the inherent risk/reward assessment but not so familiar to public market participants who are rapidly adapting to the SPAC phenomenon. Most recently, Fisker Inc., an electric automotive company, raised $500M in its SPAC deal and an additional $500M through a private investment in public equity (PIPE) — the sale of public company shares in a private arrangement. Fisker, however, produced nominal revenue in 2020. For Fisker, the SPAC gives access to the necessary capital needed to finance the growth required to meet its 2025 revenue projection of $13B.

Share of US, VC-backed tech SPACs and IPOs by industry 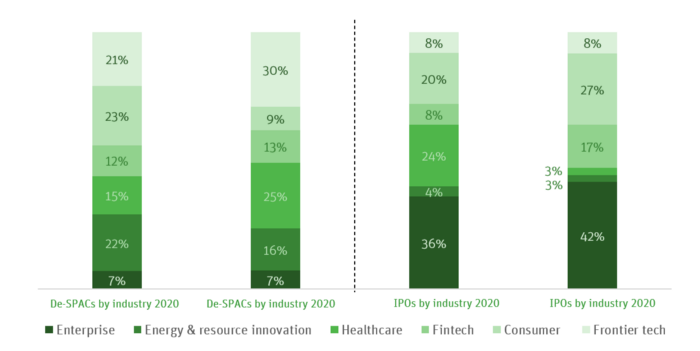 
An estimated $120B in capital as of early July 2021 is chasing targets to take private, an increasing proportion being in the frontier tech sector. SPACs usually have an 18- to 24-month window to merge with a company; otherwise, the capital is returned to the shareholders. 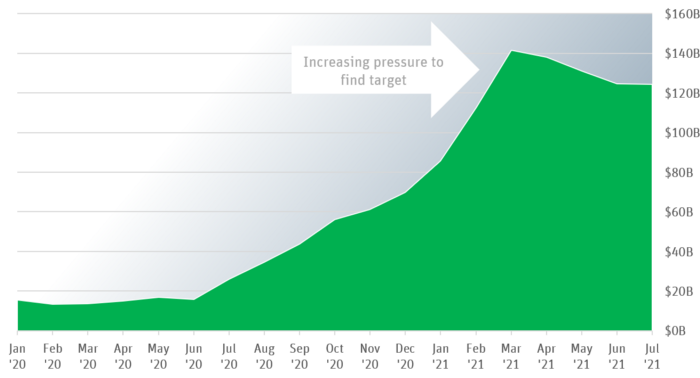 
There is a massive pool of SPAC capital searching for a home, fueled by investors seeking yield in this low-rate environment. Frontier tech companies have so far enjoyed the benefits, but it’s worth noting that founders and executives need to keep an eye on macro factors that could slam the SPAC door shut. More specifically, staying aware of movements in the five-year Treasury yield as a direct corollary to the five-year projections used in SPAC presentations. Further, inflation is taking center stage in Fed dialogue and could accelerate the decision to take action. My colleagues dig further into that topic here.

Investor eagerness and innovation, driven by the search for yield, led to the reemergence of the SPAC. The SPAC boom has been timely for frontier tech companies, which in the past might have struggled to cross the funding void to commercialization. How long the boom persists, however, could also depend on the Fed. Any increases in rates, and investors could leverage more traditional (and predictable) assets to satisfy the return requirements of their stakeholders. The knock-on effect would mean that SPACs become more difficult and the current relatively simple route to the public markets tapers off.
Written by
Austin Badger
Working in frontier technology in San Francisco, Austin has held several roles at SVB and brings more than a decade of investing experience to his clients.
Sign up for insights from across the innovation economy
Subscribe now

Expanding the human experience in a technology-driven world.
Read more