While referencing an archaic term from the late-eighteenth century may seem odd, its correlation to current events is striking. Derived from the French for ‘feudal sovereign,’ suzerainty refers to, “a dominant state controlling the foreign relations of a vassal state –– but allowing it sovereign authority in its internal affairs.”1

With trade wars, major political shifts and looming elections leaving many to wonder whose interests will dominate the world, the reference is strangely apropos.

Italy has a new government. Just days old, it begins the difficult task of ruling a sharply divided peninsula. Promises of voting to leave the E.U. and making an Itexit, implementing universal basic income and even running trains on time will be watched around the world, as Eurosceptic sharks relish the scent of non-Greek blood in the Mediterranean.

The G7 nations descend on Canada June 8 and 9. While various published agendas describe the focus as being on strengthening the middle class and advancing gender equality, realpolitik aficionados will be eagerly awaiting quotes from G6 leaders regarding the U.S. implementation of tariffs.

Germany and France seem closer than ever as Chancellor Merkel and President Macron push for major reforms to the E.U. framework. Further erosion of sovereignty in the guise of shared security and shared buckets of bailout cash are giving smaller members serious heartburn. Since the E.U. project began with the treaty of Rome in 1957, the prospect of the next crisis of confidence beginning in the Eurozone’s formal birthplace is putting everyone on edge, and opening doors towards alternative partnerships that in some cases have been closed for generations.2

Mexican elections on July 1 will be closely scrutinized for cabinet picks and future policy directions. Leading candidate Andrés Manuel López Obrador (“AMLO”) has asked to be kept in the loop of all NAFTA revisions. If granted by the current administration, this would be tantamount to the outgoing and incoming presidents sharing sovereignty. Added to the mix is the fact that Mexico has the only liquid currency south of the U.S. border in our hemisphere, so the peso becomes a pseudo-hedge for the rest of LATAM. As Mexico turns, Venezuela, Columbia, Brazil and Argentina may not be far behind.3

Turkey’s currency depreciated significantly as capital flight and continuing political instability encourage many investors to flee Asia Minor in favor of the rancorous, albeit stable, G7 nations. ‘Show me the money’ fans will note that 12 percent of Turkey’s millionaires switched nationalities in 2017.4

OPEC meets on June 22. Considering the extra capacity that the Sunni-led states were happy to pick up from the Islamic Republic’s fall from grace, American oil output is expected to put more pressure on the cartel to either continue limiting supply to the market, or go all-in to sink oil prices again, and push the frackers back into hard times.5

The U.S. introduced sanctions on key allies in aluminum and steel. The latest salvo in the evolving story of trade wars took Canada, Mexico, and the E.U. by surprise, since many had hoped for a sweetheart deal to avoid what President Trump threatened in March. U.S. Commerce Secretary Ross justified the move by saying, “There have always been trade wars. The difference now is U.S. troops are coming to the ramparts.” Despite the bellicose language, most of the rest of the world seems convinced it can do reciprocal damage to the American economy if a reasonable accommodation is not reached.6

Italy took the world on a rollercoaster of emotions and bond prices as its last election produced a new coalition encompassing many political stripes. A last-minute rejection by Italy’s president caused markets to believe a new election, and a stronger Italian swerve away from the E.U., was imminent. Italy opted instead to switch key positions in the new cabinet to assuage President Mattarella’s concerns about an Itexit vote.

President Trump pulled the plug on the Iran nuclear deal. While this hardly seemed surprising considering candidate Trump’s campaign promises, the timing and inability of every other signatory to sway Trump from acting unilaterally was a surprise to the market. The resulting upswing in oil prices lifted the loonie and other commodity-based currencies.7

North Korea and the U.S. kept everyone guessing on the status of the summit as both sides leaked their intent to cancel. As of June 6, the summit is on and the prospect of full nuclear denuclearization is keeping markets looking squarely at China to muscle through a beneficial compromise for its client state.

Mexico has LATAM watchers on edge as the July 1 presidential election nears fever pitch. The runaway front-runner, Andres Obrador, has been very clear that Mexico will no longer play second fiddle to U.S. interests. But, his indications of reversing oil deregulation and putting agricultural interests above most other priorities hints that another profound devaluation of currency is possible. 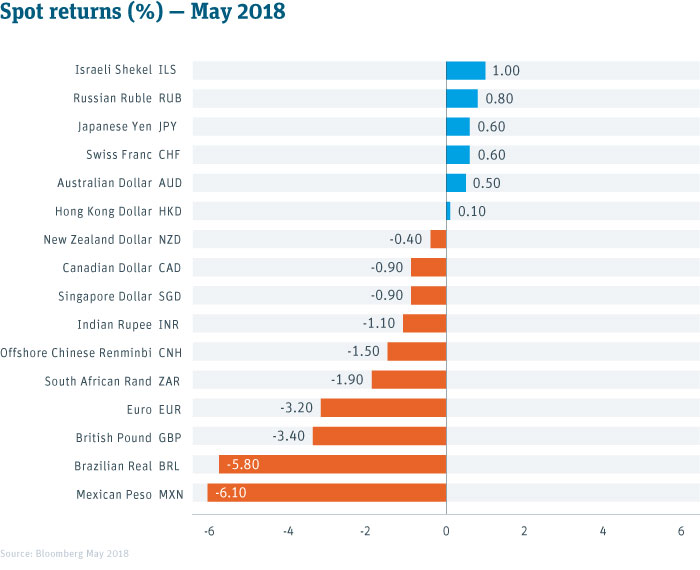 Companies, nations and multi-national organizations frequently have to revamp to stay relevant. In a world where currency becomes the most potent weapon in a national arsenal, the results for companies can be difficult to safeguard. Don’t be left betting on which national agenda will win out. Work with an FX expert to safeguard your company from twenty-first century suzerainty.

Ivan Asensio, Ph.D., Bobby Donnelly
Read more
You are now leaving Silicon Valley Bank (SVB)
You will be directed to a different website or mobile app that has its own terms of use, visitor agreement, security and privacy policies. SVB is not responsible for (and does not provide) any products, services or content at the third party site or app, except for products and services that carry the SVB name.
I understand, let's proceed Stay on SVB.com