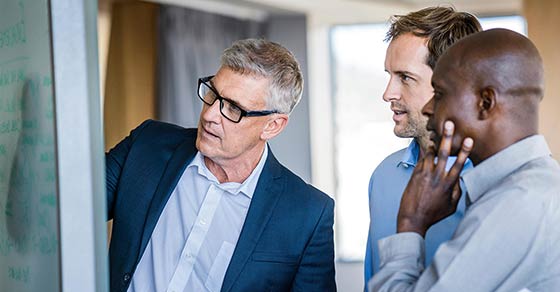 What’s your outlook for the VC ecosystem?

The US economy is on its longest bull-market run since the end of World War II.  The venture industry has also prospered this decade, and VCs have raised record amounts of capital.  In addition, innovation is being fueled by sources well beyond venture. Corporates in every industry, PE firms, mutual funds, sovereign wealth, family offices and the SoftBank Vision Fund are all active participants in the market.

While this abundance of capital could indicate a frothy market, it’s important to remember that technology is disrupting all industries. Everyone is turning to tech to compete and stay relevant. This creates entirely new market opportunities that add to the resiliency of the innovation economy.

Great companies are created in both up- and down-market cycles. The best investors understand that the VC asset class requires building exposure over time.

Can the ecosystem absorb continuing waves of capital?

Over the past few years, value creation has clearly shifted from the public to the private markets. No longer can you wait to invest in companies such as Apple or Amazon at the IPO, or post-IPO, and expect 10x+ capital gains. Investors must now look to the private markets to access high-growth investment opportunities, which is why I think this ecosystem is able to absorb the expansion of capital.

Although round sizes and valuations have increased, many of the companies behind these metrics are substantial enterprises. They have real revenues, real business models and real customers. This is nothing like what we saw during the dot-com era. Private unicorns today show revenues north of $100 million, growing at roughly 75% a year on a median basis.

What is your view of the late-stage financing environment?

The late-stage environment has fundamentally changed in the past few years. Historically, the average venture-backed tech company would raise $100 million in total private funding ahead of its $100 million public offering. That is no longer the case. Today, more than 90% of unicorns have already raised at least $100 million in a single private financing. As a result, the IPO bar is higher than ever before. For VC-backed tech IPOs in 2018 and 2019, the median revenue is $226 million, and the median market cap is $1.9 billion. On both metrics, this is nearly three times the size of companies that went public just five years ago.

In the current environment, the public markets are rewarding these companies with premium multiples. This is especially true for those that  show strong top-line growth; and, as a result, many companies have chosen to prioritize growth over profitability.

If the trend of staying private longer continues, there will be plenty of opportunities to capture outsized returns on late-stage investments.

How is it playing out at the early stages?

Seed is the new Series A, and Series A is the new Series B. According to PitchBook data, early-stage valuations have nearly doubled in the past five years. For instance, to get exposure to a company with $2 million in revenue, you now need to invest at the Series A. Five years ago, you could have entered at the B. In large part, this trend is driven by the new breed of seed investing that has now become institutionalized. The cost to start a company and find product-market fit is cheaper than ever.

While there is plenty of capital available for the best companies, VCs remain discerning with the types of companies they fund. The total number of VC deals has actually been falling for the past several years.

What is your outlook for the IPO market? Will this be the year of liquidity?

A byproduct of all these industry trends is that the pace of liquidity events has slowed, which in turn has caused a backlog of multibillion-dollar private companies. Many of these companies, however, are finally looking to access the public markets with an IPO this year.

If you look at the total aggregate unicorn value at the beginning of 2018, regions such as Europe and China realized a significant portion via mega-exits last year. This generated meaningful liquidity for investors in those markets.

In contrast, only 10% of unicorn value was unlocked in the US in 2018; however, 2019 is shaping up to be a banner year for US liquidity. We’ve already seen 26% of that US unicorn value realized in 2019 (driven by a slew of high-profile exits such as Uber, Slack, Lyft, Pinterest and Zoom), and IPO candidates such as WeWork and Airbnb could take us to nearly 50% by the end of the year or early 2020.

It’s also interesting to consider the impact that this IPO wave could have on the broader venture ecosystem. The result could be a new generation of founders, angel investors and VCs, as key engineers and early employees look to do something new.

While the IPO pipeline is more robust than ever, history has shown that availability of private capital, market volatility or political uncertainty can quickly shut this window.

What do you view as the chief challenges for fund managers looking to raise and deploy capital, especially given the competition?

Differentiation is key. Brand-name managers can often rely on their track records, but emerging VCs have to show some form of sector, operational or geographic specialization to attract LPs. And entrepreneurs are always looking for value-add investors, so bringing something to the table is critical to lead the best opportunities.

Venture capital itself is not immune to disruption. We are starting to see more platforms and paths to liquidity emerge, and that will certainly change investing dynamics in the years to come.

What are your thoughts on global investment opportunities?

The US is no longer alone in shaping the future of technology. We’ve seen a number of billion-dollar VC-backed exits happen outside the US recently. This includes massive outcomes from venture markets in Europe, South America, Israel, India and China.

Innovation hubs have continued to emerge globally, and the most successful companies are looking to expand their international footprint. As a result, many of today’s most prominent VCs are doubling down on their global efforts.

I think international investment activity will continue to increase as domestic markets become more mature and world-scale opportunities open up abroad. The world is becoming increasingly flat, and the next big idea could come from anywhere.

What new sectors are you watching?

When we look at the trends in company formation, frontier technologies continue to attract entrepreneurs. These include such categories as AI & ML, robotics, drones, blockchain and cryptocurrencies, autotech and spacetech.

Interestingly, a lot of these categories have been subsumed into many different verticals. It’s becoming less common to see a standalone product or company operating in the AI space, for instance. Instead, AI is embedded in the DNA of nearly every software startup today. We are closely watching the intersection of AI and sectors such as cybersecurity, digital health and fintech.

Before joining SVB Capital in 2006, Sulu co-founded Mazu Networks (acquired by Riverbed Technology, Nasdaq: RVBD), a network security company backed by Matrix Partners, Greylock Partners and Benchmark. Prior to Mazu, he worked for The Carlyle Group, where he was responsible for managing VC investments in emerging technology companies and advising portfolio companies on financial and strategic growth initiatives.