Richard Jenkins grew up near the seaport city of Southampton, England, where at age 17, he took a part-time job building racing boats. After completing a mechanical engineering degree, he used his education and nautical expertise to advance his quest to build the world’s fastest land-sailing yacht.

After setting the wind-powered land speed record in 2009, Richard applied the same wing technology toward his next goal: developing unmanned sailing drones to accurately measure climate quality data from Earth’s most remote oceans and deliver that data to scientists around the world.

Among the friends he had made along the way were Google Executive Chairman Eric Schmidt and his wife, Wendy, who shared Richard’s passion for ocean exploration. In 2012, they provided the grants that formed the company’s seed round through The Schmidt Family Foundation, and Saildrone was born.

Saildrone’s vision is for a healthy ocean and a safe, sustainable planet. Its revolutionary technology — wind and solar-powered uncrewed surface vehicles (USVs) — collects data above and below the ocean surface. Saildrone USVs provide intelligence and insight into subjects ranging from maritime security and seafloor mapping to earth system processes such as weather forecasting, carbon cycling, sustainable fisheries management and climate change. The data collected is helping industries and governments make better decisions to solve significant challenges. Saildrone USVs are sailing into uncharted territory, traveling where humans cannot while reducing the cost and carbon footprint of ocean exploration.

SVB’s commitment to funding innovation is what sets them apart from other banks. They were flexible, supportive, and huge fans of our big ideas. Whether coming up with innovative credit lines, providing guidance on new account structures, helping with Treasury investments through hectic markets, or making connections to potential partners or investors, SVB has been one of our strongest allies.

The young company quickly acquired additional backers, including Lux Capital and Social Capital, whose close relationships with SVB led to a banking partnership for Saildrone when it launched its Series A funding round in 2016.

SVB recognized the technical and financial innovations required for this capital-intensive company to succeed. The bank supported the company with tailored solutions at different stages of growth, including:

Taking a relationship-based approach, SVB and Saildrone developed a strong relationship built on trust and mutual passion for the frontier tech space. As time progressed, the relationship deepened, with SVB providing not only banking and investment management solutions but also introductions to prospective partners, investors, partners and industry experts. Today, the company’s serial CFO, Barak Ben-Gal, is a board member of SVB Advantage, where he not only influences the program’s strategy but also shares his unique experience as a CFO with like-minded professionals across the innovation economy. 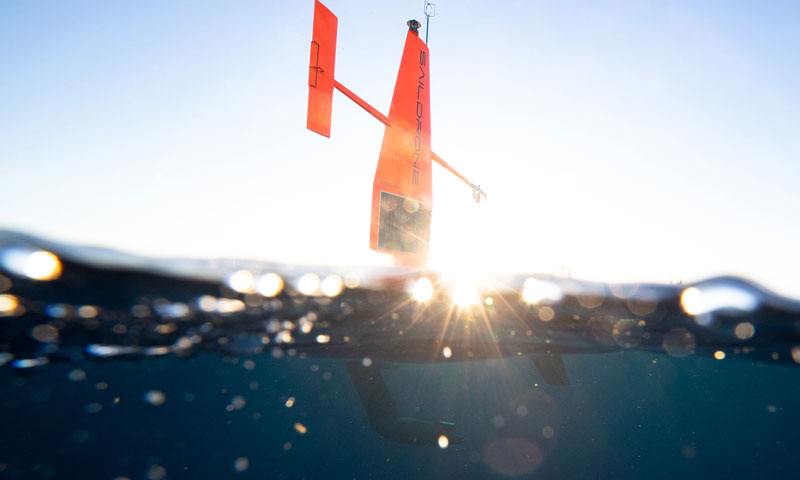 In 2021, the company made headlines when one of its 23-foot Saildrone Explorers, equipped with a specially designed “hurricane wing,” sailed into Hurricane Sam, navigating 50-foot waves and winds gusting over 120 mph to help scientists better understand and predict the rapid intensification of hurricanes.

Saildrone expanded its technology to address new market needs like ocean mapping, maritime security, and lifecycle solutions for offshore wind farms. The 72-foot Surveyor, launched in January 2021, is the only autonomous platform capable of performing International Hydrographic Organization (IHO)-compliant bathymetry surveys to depths of 23,000 ft (7,000 m). The Surveyor is expected to contribute valuable data toward Seabed 2030, a global initiative to map the world’s oceans in high resolution by the end of this decade. The newest platform in the fleet, the 33-foot Voyager, performs IHO-compliant multibeam ocean mapping down to 984 feet (300 meters) and is optimized for persistent situational awareness at sea.

The impressive capabilities of Saildrone’s autonomous vehicles have been proven in numerous operational missions sailing almost one million nautical miles from the Arctic to the Antarctic and spending more than twenty-thousand days at sea in some of the most extreme weather conditions on the planet.

The Future of Climate Tech 2022 Report

The latest edition of our report analyzes venture investments, exit trends and emerging technologies that offer hope for a sustainable future.
Learn more

Insights to inspire you

Read insights and stories from industry experts to help as you work to accelerate your company’s growth.
Report

Read more about the increasing prominence of ESG investing, and a high-level overview of the SEC’s proposal to mandate climate-related disclosures as part of routine financial reporting
Learn more
Blog | Cleantech and Sustainability

Read how Space Tech is contributing to Climate Tech and access the latest market analysis across these two sectors.
Learn more
Blog

Learn how SVB supports innovative climate tech and infrastructure projects with finance solutions. Access the latest project finance deals and connect with SVB experts.
Learn more
You are now leaving Silicon Valley Bank (SVB)
You will be directed to a different website or mobile app that has its own terms of use, visitor agreement, security and privacy policies. SVB is not responsible for (and does not provide) any products, services or content at the third party site or app, except for products and services that carry the SVB name.
I understand, let's proceed Stay on SVB.com