“Thinking of moving to Miami? DM me”

Mayor Francis Suarez’s iconic tweet and billboard campaign aimed at attracting startups and tech workers – follows the spirit that earned Miami its nickname “the Magic City”. In just over 100 years an international business and cultural hub has emerged on the southern tip of Florida. More than just a resort destination with balmy beaches, Brickell, Miami’s financial district – dubbed the “Wall Street of the South” – has long been flush with international banks, hedge funds and big tech, due to Florida’s business-friendly regulatory environment and strong ties to Latin America (LATAM). In the past few months, Miami has been referred to as “Silicon Beach”, but history shows that Miami’s tech legacy runs deep into its past and deserves its own spotlight.

In the 1980s and ’90s IBM, Terremark, Motorola and Alienware built data centers and PC manufacturing facilities in Miami, laying the foundation for a base of tech talent to germinate. The startup scene began to take shape in 2012 when the Knight Foundation embarked on a long-term commitment to nurture the local innovation economy. Almost a decade in, nearly 2,000 startups have raised $18 billion. Coworking spaces, virtual communities (like Refresh Miami), incubators, coding bootcamps and homegrown conferences (like eMerge Americas and Bitcoin 2021) provide startups with the resources needed to thrive.

In December 2020 Delian Asparouhov, a principal at Founders Fund, tweeted “ok guys hear me out, what if we move Silicon Valley to Miami.” Mayor Francis Suarez, replied “How can I help?” The exchange went viral. Keith Rabois of Founders Fund announced his move and many others followed suit. Analysis of tweets conducted by moveBuddah for the period showed a spike in Miami mentions, but was it just social media chatter or were people moving? From December 2020 to January 2021, Miami saw a net migration increase of 145%, while the Bay Area saw a 47.2% net migration decrease. COVID-19 had untethered workers from America’s traditional innovation hubs, with New York and the Bay Area being the top two departure points for new Miami arrivals. 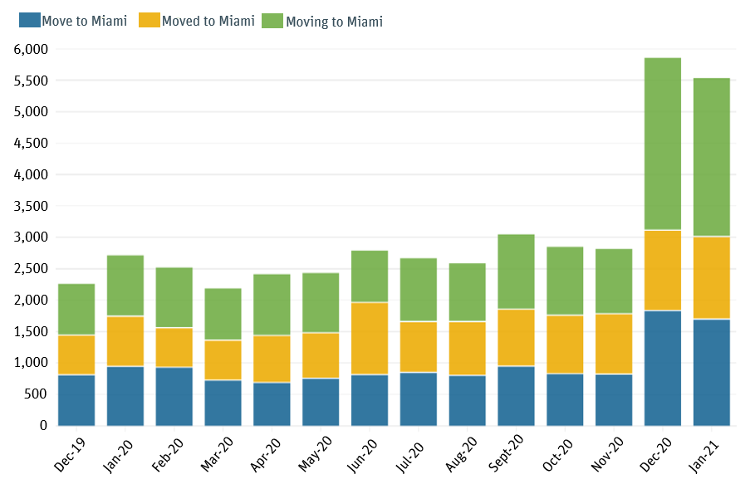 Prior to the influx of new residents and firms, Miami had already seen a boom in venture capital invested in startups. Investments by VCs in the Miami area surpassed $2 billion in both 2018 and 2019. After a slight dip in 2020 (experienced by most geographies due to the fallout from the COVID-19 pandemic), the city came roaring back with H1 2021 surpassing $3 billion in venture capital raised.

Fintech companies were mainly the beneficiaries from this investment in 2021. Pipe a revenue marketplace specializing in pairing SaaS companies with investors was founded in 2019 and subsequently raised $250 million at a $2 billion valuation in March 2021, cementing its status as Florida’s first fintech unicorn. Founders and team members relocated from SF and LA in 2020 citing how easy it was to work with Europe and Latin America on eastern standard time, plentiful international direct flights from Miami and Fort Lauderdale Airport, and more affordable residential and commercial real estate in walkable neighborhoods. 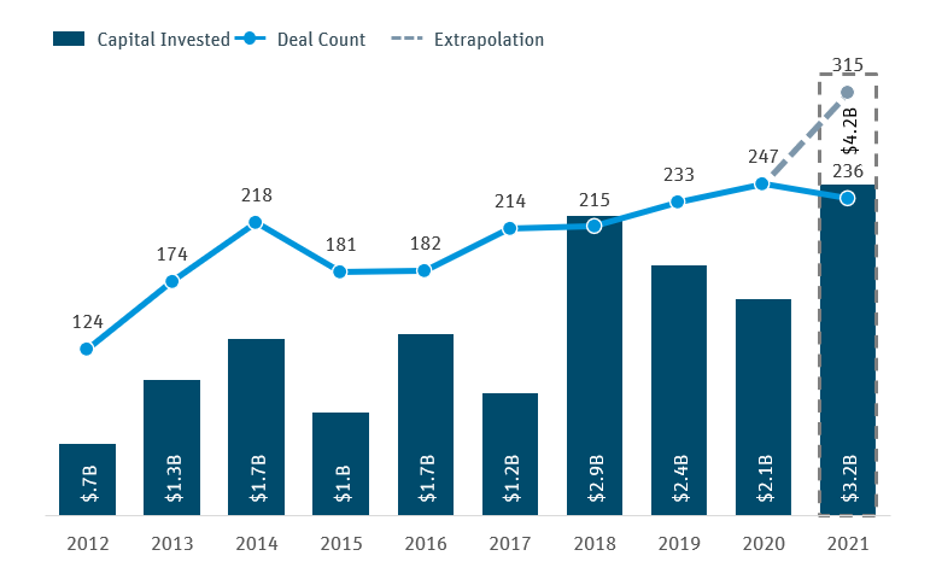 Miami is a gateway to Latin America whose startup ecosystem is thriving thanks to a virtuous cycle of capital, quality entrepreneurs and successful startups. The region saw fintech investment accelerate in 2020 and is on pace to set a record in 2021 (check out our blog on the topic).

Since 2020, asset management firms such as Goldman Sachs, Citadel Securities and Balyasny Asset Management have set up satellite offices in Miami. This presence of larger firms within the region will bring direct access to capital and talent for more startups. For new arrivals looking to break into the investor scene, Miami Angels, a network of over 150 angel investors, also provides a great starting point. For early-stage companies Miami is home to several world class incubators. TheVentureCity – one of the top-rated incubators in Miami – has teams in São Paulo, Madrid, Barcelona and San Francisco. They stand out because they’re female-founded and focus primarily on geographically diverse companies and underrepresented entrepreneurs. 500 Global, a San Francisco based incubator, has opened an office in Miami and is set to host its popular PreMoney conference in the city on December 1, 2021. The Florida International University’s School of Computing and Information Science, which runs one of the largest computer science programs in the US, has its own incubator – called StartUP FIU – to support students and local community entrepreneurs build businesses.

Miami is the perfect staging ground for companies looking to establish a presence or expand into LATAM’s booming fintech market with flight times ranging from three and a half hours from Bogota and Mexico City to eight and a half hours from São Paulo. Latin America currently has over 450 million active internet users compared to 240 million bank account holders. This has provided an ideal breeding ground for over 20 fintech unicorns to emerge and tackle critical market gaps in financial services. Atlantico’s Latin America Digital Report shows that tech is a growing part of Latin America’s economy – with fintech being a major catalyst, capturing 40% of VC capital investment in the region. 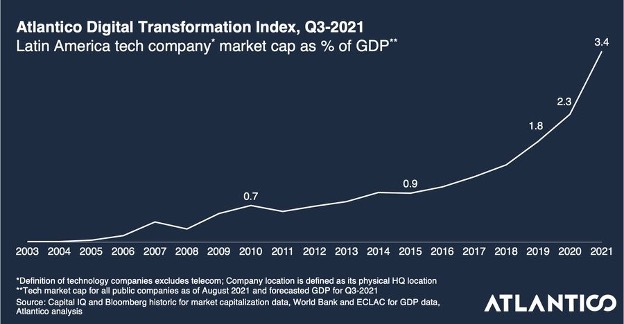 Miami-based NovoPayment partners with Visa (with the latter also playing role as an investor) to enable digital payment processing in Latin America and the Caribbean. Crypto currencies have become very popular in LATAM, with regulators and established banks being increasingly willing to experiment with digital currencies. Similarly, Miami has been a fertile ground for the crypto industry. In September 2021 the city accepted $4.3 million raised by MiamiCoin tokens. The city plans to use the funds on infrastructure, policing and helping people experiencing homelessness. Miami is also exploring paying city employees in Bitcoin, accepting payments and taxes from residents in cryptocurrency and experimenting with use cases on the Ethereum blockchain in areas such as procurement and records management – Mayor Suarez, who won a reelection on November 2, announced he would accept his paycheck in Bitcoin. City commissioners voted 4-1 to study crypto payments and financial infrastructure for the city, but they expressed concerns of Bitcoin’s price volatility and links to cybercrime.  Florida’s statutes do not allow local governments to hold cryptocurrency. Despite potential hurdles, these developments should not be ignored and instead celebrated as a sign of the city’s forward-looking stance.

SVB in Miami. DM us.

SVB has been banking companies and funds in LATAM since 2012. Today we bank 75% of all tech startups that have raised venture capital in USD as well as most of the funds. If you are a startup in Miami or the LATAM region and would like to learn more about how SVB’s Startup Banking offerings can help you achieve your goals, or would like to reach out to us directly, please contact miamistartups@svb.com.

Access insights related to Fintech including the latest in banking, payments and integrations.

Dan Allred, senior market manager of SVB’s national fintech and payments strategy, shares trends from SVB’s recent State of Fintech report and insights on the future of the fintech sector.

Fintech: A Revolution in the Making

Fintech: How Engaging in D.C. Can Be an Advantage

Michael Zuckert
Read more
You are now leaving Silicon Valley Bank (SVB)
You will be directed to a different website or mobile app that has its own terms of use, visitor agreement, security and privacy policies. SVB is not responsible for (and does not provide) any products, services or content at the third party site or app, except for products and services that carry the SVB name.
I understand, let's proceed Stay on SVB.com