After an unprecedented year that saw sky-high valuations and record levels of US venture capital (VC) investment in the software-as-a-service (SaaS) sector, the investment pace is expected to temper in 2022 as market conditions change. However, the best companies will still get funded and command healthy multiples and valuations.

Let’s delve into some of the investment trends driving the US SaaS sector in 2022, surfaced in the recent State of SaaS: Perspectives on the Trends Impacting the SaaS Ecosystem report to find out why.

US SaaS VC deals and investment

In 2021, intense competition drove valuations to an all-time high with Series C valuations more than doubling. At that time, investors were willing to pay premium prices for SaaS fundraising, even as deal sizes and valuations increased dramatically. Now, we are seeing a plateau as heightened valuations are brought into focus amid the continued downturn in public markets. If the public markets continue to slide and companies struggle to grow, pressure on late-stage private valuations to rebase could mount.

However, that growing disparity between valuation and performance (valuations for early-stage startups grew while performance remained somewhat constant) left many wondering how long these lofty expectations could persist.  Although historically, revenue growth was the primary driver of revenue multiples for SaaS startups, 2021 saw this relationship bend, which could signal other factors such as profitability, vision, management potential and addressable market are the must-haves for investors. To maintain strong multiples, private companies likely will need to demonstrate strong revenue growth, as we expect 2022 could see a return to fundamentals.

US SaaS pre-money valuation by series 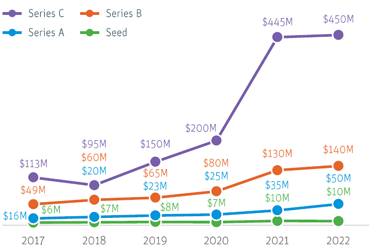 With the 2022 landscape changing, investors are reassessing where and at what stage they want to deploy their capital, according to the report. Some private investors, such as Tiger Global Management, are pumping the brakes on large, late-stage investments in response to a host of macroeconomic factors: inflation, interest rates and geopolitical events. However, their interest in the early stage shows no sign of abating. This has led to a highly competitive Series A and B environment, which is largely insulated from the macroeconomic variables impacting late-state, pre-IPO companies.

Based on our analysis, and what we’re hearing anecdotally from VC investors in the market, early-stage investment appetite is driven by potential versus demonstrated value. In a recent panel discussion on the State of SaaS report, Logan Bartlett, managing director at Redpoint, shared his thoughts on the disconnect between potential vs demonstrated value: “It leads to this disconnect of what’s being valued in the public market because everyone has access to it — and it’s consensus based — versus the private market where it’s only a moment in time and all it takes is one firm, one solo capitalist, one whatever to make the market. That could be the only opportunity that exists for one year, three years, ever, for a potential company.”

As public markets remain volatile, hybrid PE/VC firms have focused efforts on beaten-down public tech stocks as well as early-stage companies out of concerns over Series D+ valuations softening and muted exit activity. However, hybrid investment in SaaS companies has remained steady, with no material drop so far in 2022, due to strong enterprise demand and multi-year contracted revenues insulating companies from volatility. Check out a recent TechCrunch article offering additional analysis on hybrid investing trends, citing our report data.

Despite the shifting fundraising dynamics, webinar panelist Tiffany Luck, investor at GGV Capital, still sees an upside for SaaS startups seeking VC funding. “One big difference is private market investors or VC investors, in general, have a built-in, go-long mentality,” she said during the panel discussion. “The timeframe we expect to be very long, and there certainly are public market investors who also have a very long-term mentality, but I do think that gets tested very regularly, especially when things are moving so much and so quickly. I think a lot of things end up working themselves out with a long enough time horizon.”

“I think overall, even despite everything that has been happening in the last quarter or two around public market volatility and overall macros concerns, … there are so many good things going on for SaaS in particular. We’re still early in cloud adoption; you still have to imagine IT spending is only going up from here in a very big way — there are so many good things happening. I’d say on a very long-term basis, [there are] 10x the number of tailwinds as there are headwinds.”

Luck’s advice for founders: In this funding environment, focus on business growth, including sustainable unit economics and strong underlying fundamentals. “As long as you’re doing that and executing, I don’t think you’ll have any issues fundraising.”

One of the biggest trends the report saw in 2021 was a spike in SaaS M&A activity as investors adapted to remote due diligence in a post-COVID environment. M&A activity increased 10 percent for early-stage companies, with 23% of all acquisitions occurring at the seed stage. Although macroeconomic factors and increased regulatory scrutiny could come into play, there’s no indication of a slowdown in M&A activity for acquirors eager to purchase more pragmatically priced companies.

Another development we’re closely monitoring from the report: a surge in corporate VCs looking to capitalize on lower valuations and make strategic investments in the SaaS space. What’s driving this trend? Companies adopting cloud technologies, addressing technical debt, plus an appreciation for innovation and access to leading-edge technology. As a result, corporate VCs may find SaaS startups appealing investment targets.

Although some of these investors are technology-based, such as Salesforce, expect to see nontraditional investors — think grocers, consumer goods companies and industrial technology companies — to pursue deals. These corporate VCs offer something very complementary to traditional VCs: access to new customer and distribution channels.

Venture debt: Poised for a comeback?

With access to so much cheap equity in recent years, not surprisingly debt sophistication is lacking among some SaaS entrepreneurs. However, now that it’s taking longer to raise money, particularly for late-stage start-ups, it’s worth revisiting the role of venture debt financing. Says Bartlett, “It’s a tool in the toolbox that we’re going to see used more and more over the course of the next year, two years, as companies try to draw out the runway to hit whatever next milestone they want for the subsequent financing. I think it’s a pragmatic thing to be doing and getting these lines in place if you haven’t.”

Written by
Emma Eschweiler
Emma Eschweiler is a vice president for Silicon Valley Bank’s Technology Group.
Sign up for insights from across the innovation economy
Subscribe now

Let us help you gain a strategic advantage in the Enterprise Software space with our sector-specific expertise, industry connections and flexible financing solutions.

The views expressed in this column are solely those of the author and do not reflect the views of SVB Financial Group, or Silicon Valley Bank, or any of its affiliates. This material, including without limitation the statistical information herein, is provided for informational purposes only. The material is based in part upon information from third-party sources that we believe to be reliable, but which has not been independently verified by us and, as such, we do not represent that the information is accurate or complete. You should obtain relevant and specific professional advice before making any investment or other decision. Silicon Valley Bank is not responsible for any cost, claim or loss associated with your use of this material. All non-SVB named companies listed throughout this document, as represented with the various statistical, thoughts, analysis and insights shared in this document, are independent third parties and are not affiliated with SVB Financial Group.