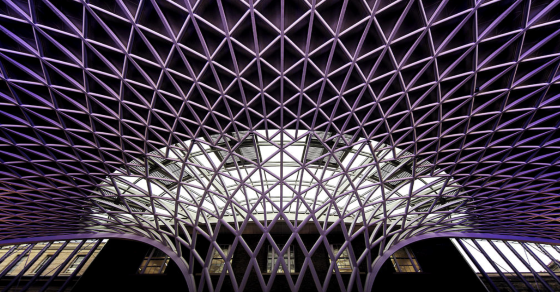 Expectations of a ‘picture perfect’ US economic rebound faded amid the delta variant’s surge. Since late July, Wall Street economists trimmed 2021 GDP growth forecasts from 6.5% to 5.9%. With consumer prices rising 5.3% annually and growth outlooks dimming, the economy could be heading into stagflation, a period of stagnant economic growth and higher prices. Central Banks are faced with a balancing act addressing higher prices and achieving full employment which may cause FX volatility to jump from historic lows as monetary policy adjusts.

The ‘Misery Index’ flashes red. The Misery Index, created by economist Arthur Okun, is one of several models that seeks to measure the economic well-being of the average citizen. The index is calculated by adding the annual change in prices (inflation) and the unemployment rate. The most recent value for the US came in at 10.5%, indicating a troubling economic environment for average Americans. High inflation alongside high unemployment puts the Fed in a predicament in managing their dual mandate: stable prices and low unemployment.

The US Economy made “clear progress” while Fed action pends. One of the Fed’s primary factors on whether to change course and when, is to consider the question of whether the economy is meeting its threshold of “substantial further progress” on inflation and employment. At his August 27 Jackson Hole speech, Fed Chair Powell indicated inflation had met the Fed’s threshold, and that the labor market made “clear progress.” Given these improvements, one would expect the Fed’s next course of action to include tapering of its quantitative easing program (asset purchases). However, following a big miss on August’s non-farm payroll report (with an estimated 733k versus an actual 235k), it is unlikely a tapering will occur before November or December’s FOMC meeting.1 As in 2013, an official announcement of tapering may cause the markets to sell-off with the USD catching a bid in a flight to safety. However, the prolonging of QE leaves the risk of inflation running hotter than normal, with the Fed forced to raise rates later, slowing the economy, markets and potentially giving the dollar a bid.

RMB remained stable amid Chinese crackdown. China took aim at some of its most powerful privately-run enterprises, dramatically increasing scrutiny and, in some cases, banning certain industries from operating outright. From the tech giants to privately run educational institutions, shares of these companies crashed. Even so, over the last two months the RMB traded flat as the Chinese crackdown primarily affected domestic industries, leaving foreign capital flows intact. Over the longer run, foreign investors and business may be dissuaded from investments and business in China, a challenge to the Chinese goal of making the RMB a world reserve currency.

Tech cross-border M&As set records. With US private and public tech valuations and venture funding at record highs, companies are looking overseas to accelerate growth. In fact, Q3 2021 is on track to see the most cross-border M&A deals in history. This comes while hedging costs are at record lows and acquisitive companies can better mediate FX rate risk. Rock bottom short-term interest rates persist around the world as well, giving companies and investors peace of mind knowing they can lock in a future rate with a forward contract at little trade-off verses the spot rate. Implied volatility, a measurement of a likely future movement in price, is near pre-pandemic lows, meaning premiums on purchased options are historically cheap. Options will act as insurance to protect against FX rate risk during negotiations of the deal, yet they won’t obligate a company or investor to unwind a large FX position in the event the deal falls through. 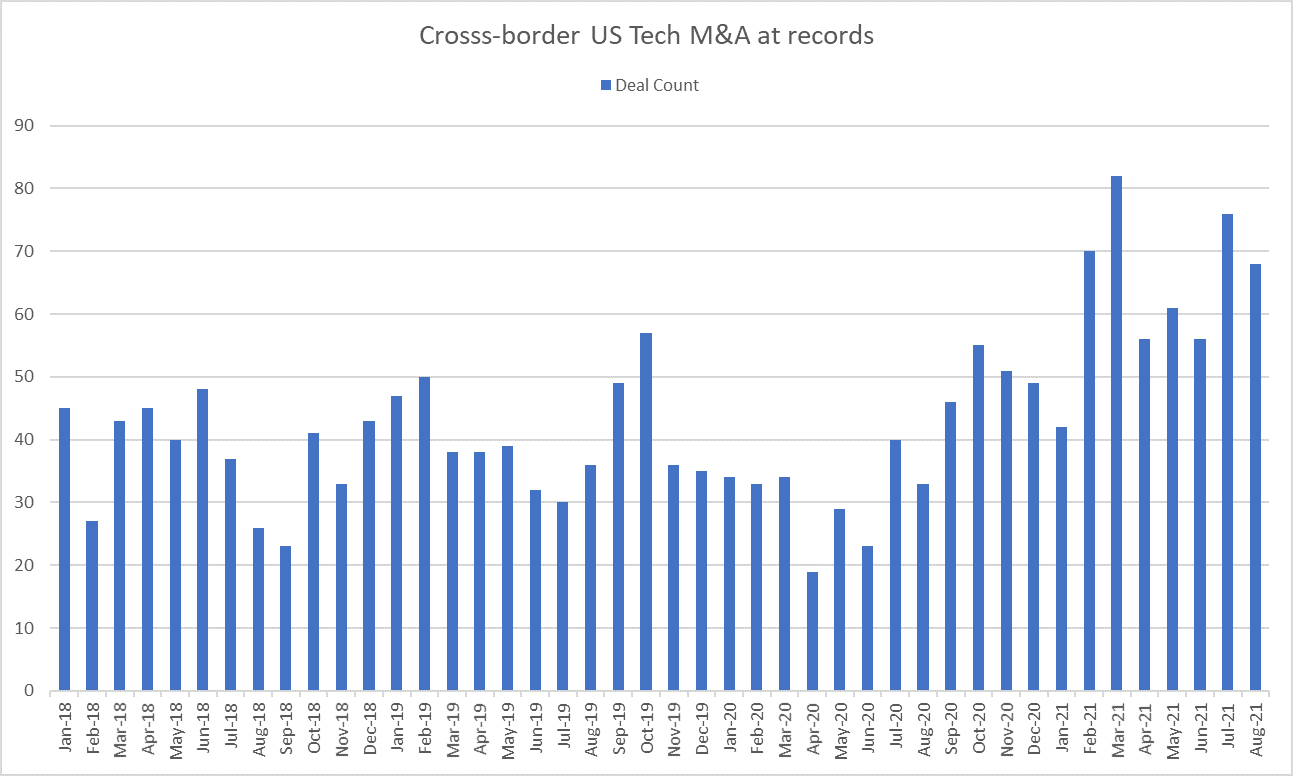 Suppliers stressed. Around the world the supply side of the economy is having trouble keeping up with the snapback in demand: labor shortages have slowed the capacity of full economic recoveries; a global shortage of semi-conductors has caused major auto manufacturers to pause production; trans-pacific shipping costs have tripled; and oil prices are back near 2018 highs of $70 a barrel.2 The bottlenecks and higher input prices are even more evident in wholesale price indices, with the US headline producer price inflation (PPI) rising to a record 8.3% YoY in July. Higher prices from these transitory supply-side factors, added with the increased demand spurred by incredible fiscal spending, can further increase inflation pressures. While US inflation runs hot, commodity currencies like NOK, CAD can see a lift as raw material prices remain elevated.

Calm before the storm? FX implied volatility as measured by the Deutsche Bank FX Volatility Index (CVIX), has steadily declined after reaching post-financial crisis highs of 16.36 in March last year. Volatility has cooled so much that 2021 is, on average, a less volatile year thus far than 2013—the last time the Fed announced tapering of its asset purchases. Since the CVIX started in 2001, volatility below 6 has not lasted for more than 5 months straight with the index spiking at least 2x within the following year. Given the headwinds of Fed tapering and stagflation, a sudden rise in FX volatility could occur. With flights to safety routine in volatile times, the USD could reach new 2021 highs. 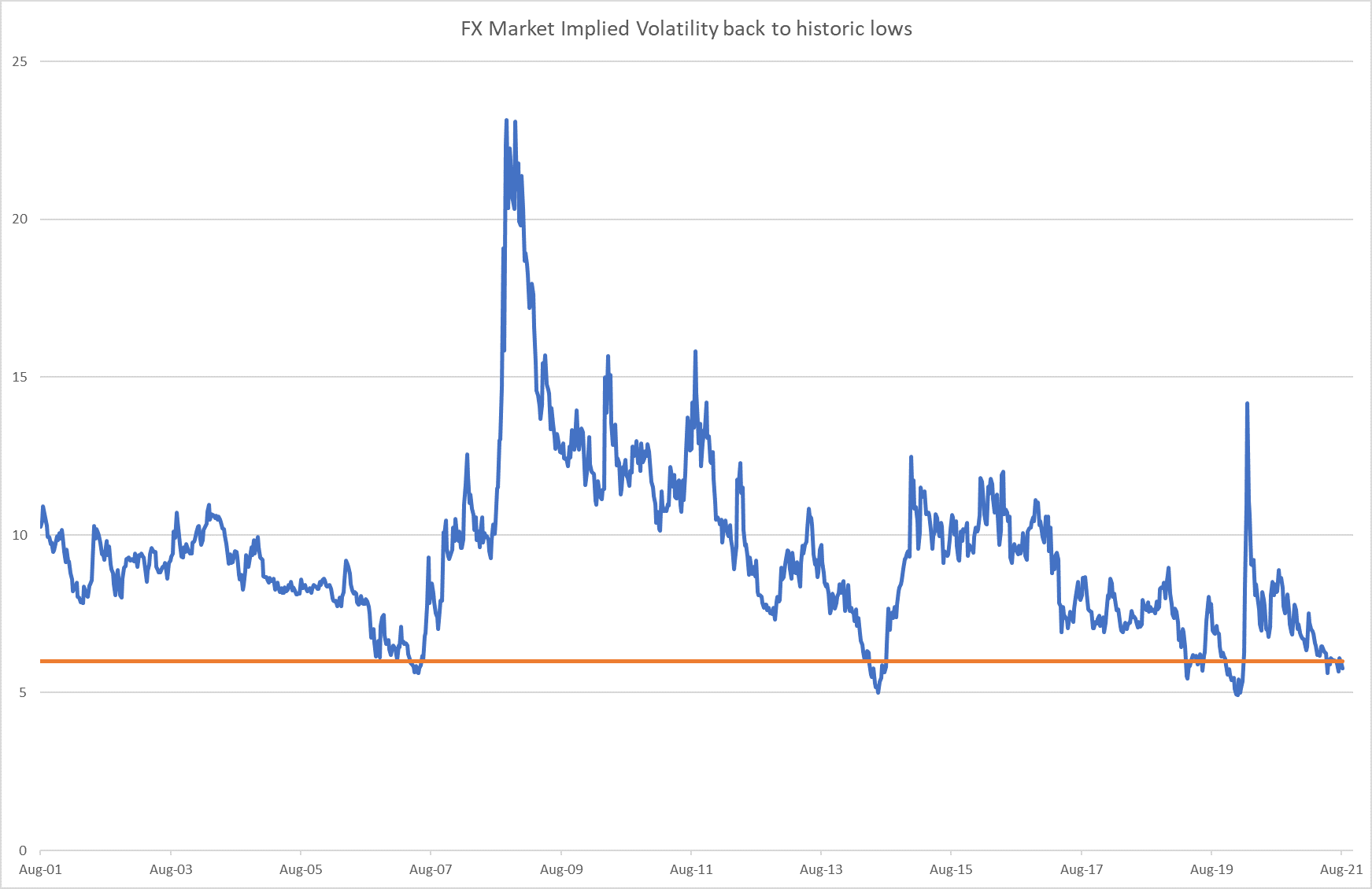 Ballooning Twin Deficits: Prior to March 2020, America consistently ran a trade deficit averaging 2.9% of GDP from January 2010 through February 2020. Since March 2020, the trade deficit has ballooned, averaging 3.5% of US GDP. The gaping trade deficit comes aside a Federal government splurging on numerous pandemic aid programs and now a largess $1.2T infrastructure package.3 The US budget deficit as a percentage of GDP stood at 12.6% in July 2021, just down from post WWII highs of 18.6% in March 2021.

Large US fiscal deficits have historically been absorbed by foreign buyers of treasuries like China and Japan.  Economically, this should counteract the trade deficit (current account) as foreign buyers purchase the equivalent size of the trade deficit in US assets (capital account). Yet now as the budget deficit is surging, the Fed, not foreigners, is the largest holder and buyer of treasuries, owning over $5.3T and purchasing $80B per month, accounting for 28% of US debt issued in 2021. As the Fed continues to monetize fiscal deficits, less foreign buyers of US debt to counteract these trade/capital imbalances will put pressure on the dollar over the long term.

Emerging markets have taken the lead in exiting pandemic era monetary policy. Throughout the developing world, central banks have lifted short term interest rates from COVID-induced lows to support their currencies as inflation is higher than policy targets. This has given support to EM currencies over the past 6 months, even while the threat of a Fed taper should negatively impact them. Seven emerging markets have seen their policy rates increase over the last 6 month with mixed returns against the dollar: South Korea (-3.2%), Brazil (+6.3%), Peru (-9.6%), Mexico (+4.0%), Russia (+0.6%) and the Czech Republic (+2.2%) while the JP Morgan Emerging market currency index is flat over the last 6 months (+.28%). While these rate hikes have given support to EM currencies, the headwinds of a Fed taper may ultimately be too strong to avoid a  sell-off.