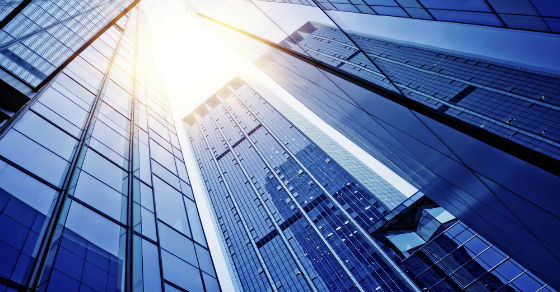 The beginning of each new year presents a good opportunity to reflect on lessons learned. If anything, 2017 confirmed for venture capitalists (VCs) just how dynamic the private capital environment remains. Exit activity was slower than expected this past year. However, in some cases private capital stepped up to fill the void. Will this new-school trend continue in 2018, or will we see the re-emergence of robust IPO activity? Maybe there will be a bit of both, especially since there are plenty of reasons to be bullish as we enter a new era in the innovation economy.

When crossover investors flooded the private markets in 2014 and 2015, late-stage valuations skyrocketed. These large capital raises propelled the birth of the unicorn (a private company valued at more than a billion dollars) and subsequently froze the exit market for VCs in 2016. Instead of pursuing IPOs, companies were forced to focus on growing their businesses to a point that justified their outsized valuations. This brought a healthy and welcome recalibration to the private markets.

But then came 2017 – and after a yearlong IPO drought, many VCs were hopeful this would be the year of liquidity for today’s unicorns. It all made perfect sense — market volatility was low, recent IPOs were performing well, demand from institutional investors was high and there was an abundance of billion-dollar IPO candidates in the pipeline. But what subsequently transpired wasn’t the same old story for capital markets and the innovation economy.

Early in 2017, we saw the first planned IPO of the year, AppDynamics, acquired by Cisco for a significant premium on the day before its scheduled public offering — a seemingly positive harbinger for what was to come. That was followed by a $3.5 billion headline IPO from bellwether Snap, which valued the company at nearly $20 billion. However, in the months that followed we saw that many of the most promising IPO candidates chose to raise money from private market investors, further delaying their IPO plans. It didn’t help that in July the value of Snap’s stock fell below its offering price, and IPO activity slowed to a crawl in the summer months. It quickly became clear that 2017 was not shaping up to be the year of elevated liquidity that many had anticipated. It also became clear that the public markets would reward fundamentally sound businesses and punish those lacking solid unit economics or sustainable business models.

While overall IPO activity in 2017 fell short of expectations, it’s important to remember that the market was more robust than the previous year. We ended 2017 with 18 VC-backed tech IPOs (compared to 15 in 2016), and this set of companies outperformed in the public markets, with a median post-IPO return of more than 30 percent. At the end of the year, 15 out of the 18 were trading above their offering price, which highlights the appetite from public market investors for high-growth, venture-backed opportunities. 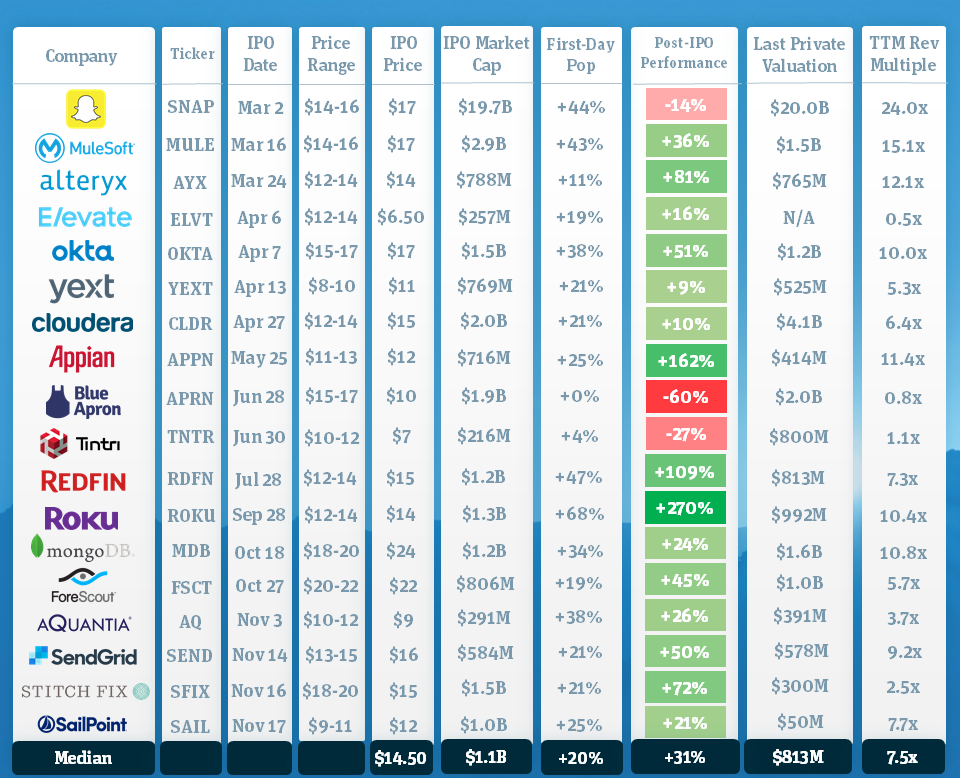 On the M&A side, 2017 was pretty quiet, despite a seemingly high level of interest from strategic corporates. The number of U.S. VC-backed M&A deals fell by 15 percent to 683 — compared to 808 in 2016 and 879 in 2015 — though deal sizes went up on average. The most exciting development was the enthusiasm for combining technology with traditional businesses. Innovation companies saw an increased interest from non-tech acquirers, and with Amazon’s $13.7 billion purchase of Whole Foods making headlines last summer, it’s clear that the lines that define technology as a sector are quickly blurring.

The path to liquidity for today’s venture-backed companies looks very different from what we have seen. While IPOs and strategic M&A continue to drive most returns in the innovation economy, additional sources of capital have emerged, opening up new avenues for today’s late-stage ventures. In addition to the corporate activity we have seen, private equity firms have become increasingly active in the technology sector. There have been record levels of fundraising activity, and nearly 20 percent of PE investments are now flowing into tech companies. This capital can be used to invest alongside traditional VCs into private rounds (e.g., Lyft, Magic Leap, Wish, SoFi and Unity) or into buyout transactions that provide exit opportunities for existing shareholders (e.g., Qlik, Marketo, Cvent, Infoblox and Lithium Technologies).

Clearly, we’re not facing the same old market dynamics. One peek at SoftBank’s $100 billion Vision Fund, which represents by far the largest venture fund of all time, says it all. On the one hand, the profusion of capital in the industry can lead to unsustainable valuations as companies are encouraged to raise greater amounts of capital and stay private longer. On the other hand, SoftBank’s fund represents a large enough pool of capital to provide meaningful liquidity solutions to even the most highly valued companies like Uber, which could pave the way for more robust secondary markets in years to come. SoftBank’s $7 billion tender offer involving Uber’s early investors and employees is, by scale, equivalent to one of the largest tech IPOs of all time.

As the IPO market slowed, other creative alternatives to the traditional public offering emerged in 2017. Most notable was the confidential filing of music-streaming giant Spotify for a direct listing on the New York Stock Exchange (NYSE). Unlike the traditional IPO process, there will be no road shows, proceeds raised or lockup periods, and there will be minimal involvement from investment banks. Silicon Valley investors and entrepreneurs will be watching this alternative-offering trend closely as the liquidity markets continue to evolve.

Another wildly popular topic today is the ICO — or initial coin offering. There’s no denying that 2017 was an epic year for ICOs, and the roughly $3 billion that was raised is staggering. While very exciting, this mechanism is still early in its development and carries significant risk because of the lack of regulation, possibility for fraud and potential vulnerabilities associated with an application’s security. We are also witnessing speculative behavior, similar to the dot-com bubble, and over the next few years many players may end up getting hurt. Despite the obvious challenges, blockchain technology offers tremendous potential. The ability to invest at the protocol layer, offer unique liquidity solutions and unlock potential network effects make ICOs a conceptually interesting method of financing.

As we look ahead to 2018, exit conditions are favorable, and the pipeline of opportunities remains robust. Despite heavy criticism around today’s late-stage valuations, some high-performing companies in the private markets are positioned for meaningful value creation upon liquidity. For unicorns today, the median statistics indicate $98 million in revenue, 60 percent annual growth, 68 percent gross margins and $80 million in cash. In other words, these companies have real revenue, real business models and real customers. Moreover, the strong public market performance in 2017 (especially for most of the VC-backed tech IPOs) is a very positive signal for the IPO market in the quarters to come.

The 2018 M&A market also looks promising, especially given the recent tax reform that will benefit many of today’s largest corporations while encouraging the repatriation of cash held overseas. This tax holiday could incentivize big businesses to make additional investments toward inorganic growth objectives, which could have an impact on strategic M&A within the innovation sector.

Still, we are experiencing a nearly two-decade trend of companies staying private longer. There are a few core reasons for this lack of liquidity. The first is the availability of private capital. Companies today don’t feel the need to pursue a public offering, adding that extra layer of scrutiny and submitting to an expensive IPO process, when private investors will continue to fund their businesses at attractive valuations. We saw several high-profile financings take place last year (e.g., Uber, Airbnb, WeWork, Slack, Pinterest,Houzz, Lyft, SoFi, Magic Leap and Didi Chuxing), and most of these companies have secured enough capital to fund their operations through 2018. Second, some companies that raised during the frothy years of 2014 and 2015 are not yet aligned for an exit valuation that would exceed the value of their last private round. And third, as the world becomes more interconnected and the best businesses seek to compete on a global scale, we are seeing more companies delay their public offerings to focus on geographic expansion into new markets.

While the future looks bright for the IPO and M&A markets in 2018, the questions will center on whether the availability of private capital and changing exit dynamics will continue to delay liquidity. Despite some potential headwinds, there are enough positive signals to forecast an uptick in exit activity for 2018. Some new iconic tech companies will likely make their public market debut, and if investors harvest attractive returns, they will look for new opportunities to plant their seeds in the next crop of innovative companies and frontier technologies.

Companies referenced throughout this document are independent third parties and are not affiliated with SVB Financial Group or SVB Capital.

Daren Matsuoka is a Data Analyst for the SVB Capital team in Menlo Park, responsible for managing a database that houses all of SVB Capital’s proprietary information. Daren works closely with the venture capital Fund of Fund and Direct investment teams, leveraging a robust analytics platform to help identify breakout companies and fund managers.

Prior to joining SVB Capital in 2015, Daren participated in a series of finance internships at Morgan Stanley as well as a fund accounting internship at State Street, one of the world’s largest custodian banks.