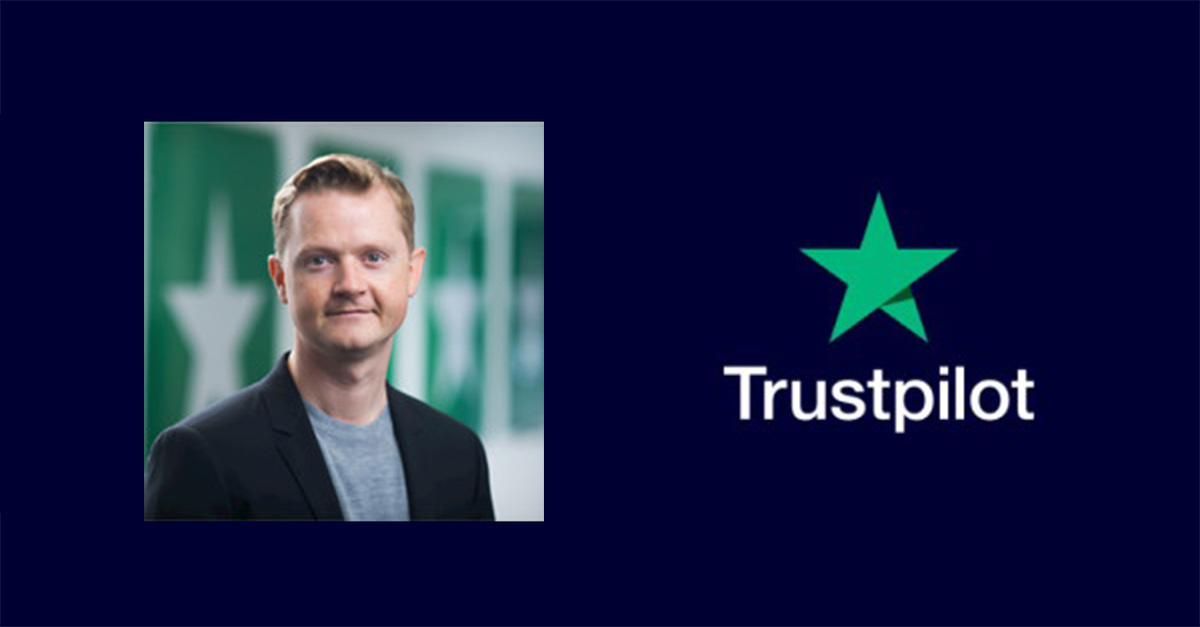 When consumers shop online, many go to Trustpilot before completing purchases of goods and services. Following a successful IPO earlier this year, the online consumer reviews company is now looking to expand its service more widely around the globe.

Back in 2007, when Trustpilot was founded, ecommerce was still very much in its infancy. Many consumers – and businesses – were experimenting with online purchases and sales for the first time. And in large numbers of cases their experiences were far from positive.

“It was not a lightbulb moment,” he recalls. “People like this idea that you are sitting in the bathtub or underneath an apple tree and something happens. But, for me, it was rather a process over a fairly long period.”

“At the time I was running my own ecommerce store and a number of things were evident to me,” he says. “A lot of people had very bad shopping experiences on the internet at large. On the seller side, there were huge trust issues. So often sellers would get a lot of visitors but not a lot of customers.”

“At some point I remember reading about a travel agent sending all their guests to a hotel where the toilet facilities weren't working. And they were not offered another hotel. And I thought, you know I would like to have known that before I had booked! So, initially it was like … hey ... there has to be a way where I can make it easier for Mom to get a good experience.”

So Peter spoke to his father's cousin – so close he calls him his “uncle” – and who, fortuitously, “had made a small fortune selling the white non active stuff in pills”.

This money lasted two years and enabled Peter to build a functioning website in less than a year. A year after that, Trustpilot raised 1.8m Danish Krone (around £180,000) from Seed Capital, a Danish seed investor, using the money to build a paid for business product and to start selling its service to business customers.

Empowering consumers to shop with confidence

Today Trustpilot operates a 'freemium' business model whereby businesses pay for additional services such as advanced analytics or personalised customer support. But its business aims are little changed from day one. By bringing businesses and consumers together, Trustpilot seeks to enable consumers to shop with confidence and to deliver rich insights to help businesses improve the experiences they offer their customers.

By the end of December 2020, consumers had created 120m online reviews of 529,000 websites using Trustpilot. And, following the company's IPO in March of this year, the company now has a market capitalisation of well over £1bn.

But the journey to IPO has not been without its challenges.

“It took us a long time. You always overestimate what you can do in a year and what you can do in a decade. Building a company takes at least a decade. Ultimately, we succeeded but that was with a lot of trial and error. And I think we were also helped by the fact that the market was pulling us with it. Consumer demand for knowing what other consumers thought of businesses exploded, ecommerce exploded. So that allowed us to make mistakes that would have ended other businesses.”

“Initially, I thought Trustpilot would be a toolbar that people would install and that the website would be more an afterthought: people would go to the website if they could not figure out how to install the toolbar.”

“As it turned out nobody could be bothered to install the toolbar and it was incredibly hard to make it work and they uninstalled it rapidly after. They just didn't use it. But the website was enormously popular.”

So what are Peter's tips for would-be entrepreneurs?

“Imagine you are landing on the American East coast 400 years ago and you have to get West. What kind of person do you want to be with you? That's a very different kind of person from who you want to lead an army of a million people. So think who is ready to roll up their sleeves and say, maybe, call up 1,000 businesses over the next 3 weeks. Who is actually up for that?”

The toughest challenge of all

After the Seed Capital fundraising, Trustpilot had “a bunch of smaller raises” as the company perfected its business model before raising “a little less than €4m” from Northzone in 2011.

For Peter, it is this stage of a company's growth that is the most difficult.

“For most entrepreneurs it is actually the scaleup that is the biggest challenge because combining that in the same person [from the startup phase] is almost impossible.”

“The scaleup is the stage where a lot of entrepreneurs fail, step down as CEO or get professional help from more seasoned people and where the way you lead the business goes from a team of founders to a team of executives. That is the most challenging phase to get through in all the stages.”

“If you are an entrepreneur and if you have some ideas and you are willing to quit your job to try out something you are good at that, it is extremely rare that this is the same person who is also good at thinking through what is the most efficient way of sending invoices to customers or how to ensure your salary system connects with your HR software.”

“The scaleup is the stage where a lot of entrepreneurs fail, step down as CEO or get professional help from more seasoned people and where the way you lead the business goes from a team of founders to a team of executives. That is the most challenging phase to get through in all the stages.”

It was at this point that Peter brought in a team of senior executives to help steer Trustpilot's next stage of growth. It was also when he first turned to Silicon Valley Bank for a debt facility.

For Peter, there are several key attractions to raising bank debt over taking venture capital investment.

“Firstly, I find that it is faster to raise debt,” he says. “Raising money where you are getting a new owner onto the board ... is a much longer process so the burden on management on [raising bank debt] is much smaller.”

Adding a debt facility from a bank also gives you additional flexibility as a company, Peter says. Indeed, as part of its IPO, Trustpilot has renewed its debt facility with Silicon Valley Bank.

“If we want to hit the speeder it will just make it easier and faster for us,” he says. “It is an optional accelerator or airbag. If at some point, say, we want to invest where the return on investment is enormously high, we would probably go to the market and fund raise. But [the debt facility] would allow us not to wait for that ... it gives us the option to strategically accelerate wherever we see necessary and to do it the moment we want to which is incredibly attractive.”

Above all, bank debt can be an extremely cost-effective way of raising finance, Peter says, allowing you to raise money without diluting ownership yet still retaining financial firepower to invest in the business. As a company, you can then tap investors when you hit your next milestone and when your valuation is higher, he says.

But choosing the right bank is critical. “The good thing about Silicon Valley Bank is that they understand tech and they understand the startup environment and they have some of the qualities that you are looking for in a more classical venture capital investor. They know what the path is, they know what good looks like, they have the networks. So you get a lot of the same upside for a fraction of the price of ownership. Plus because they understand it better, the risk is lower and so your terms get better.”

With a successful IPO now in its back pocket, Trustpilot is focused on its next stage of growth.

“We have a $100bn market opportunity ahead of us and we need to capture it,” Peter says. “From here it is about further internationalisation and living up to the trust promise that we have given and show that we are going to be the market leader on trust.”

But he will always keep one eye out for potential shocks further down the road. And here, the company's debt facility with Silicon Valley Bank is of great comfort.

“We're extremely well capitalised after the IPO but you never know if there might be another pandemic ... we have learnt that. So, in the event of some world changing event, having already agreed on the terms of the debt facility means that is one less thing we have to worry about.”

View the PDF version of this article here.

Learn how to choose which legal structure is the best fit for your startup. There are multiple ways to incorporate, each with its advantages and disadvantages.

The views expressed in this article are those of the person interviewed and do not necessarily reflect the views of SVB Private Bank or other members of Silicon Valley Bank. All material presented, unless specifically indicated otherwise, is under copyright to Silicon Valley Bank. and its affiliates and is for informational purposes only. None of the material, nor its content, nor any copy of it, may be altered in any way, transmitted to, copied or distributed to any other party, without the prior express written permission of SVB. All trademarks, service marks and logos used in this material are trademarks or service marks or registered trademarks of SVB Financial Group or one of its affiliates or other entities.