UK Fintech Survey for 2016: Europe Holds the Key to Expansion, Infrastructure Will Be Biggest Disruptor

Last week, 68 UK fintech leaders shared their 2016 predictions at a fintech event hosted by Anthemis and Silicon Valley Bank (SVB), the bank of the world's most innovative businesses and their investors. Six fintech experts from Stripe, Anthemis, GoCardless, Passion Capital, Funding Circle and SVB sat on a panel at the event.

Last month, SVB asked fintech founders and investors in New York the  same questions. The survey examined issues that are top of mind for startup companies interested in disrupting traditional financial services. The results were strikingly similar in the UK, with one exception: geography.

It seems that relatively few UK fintech businesses consider US expansion, in contrast to other digital companies. When asked where respondents saw the greatest opportunity for growth or expansion for fintech companies in 2016, 39 percent of UK businesses said Europe, compared with just 22 percent targeting the US. 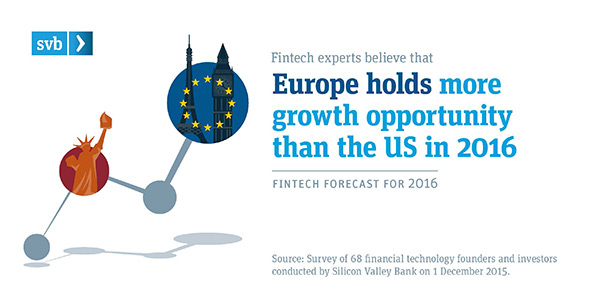 Across the pond, the numbers were inverted, with 35 percent of businesses focusing on US expansion and just 14 percent targeting Europe.

Though 37 percent of respondents cited regulation as the biggest threat to growth, members of the panel applauded the regulatory environment in the UK, finding it more relaxed than in the US. One panellist quipped that the UK government has been so supportive of their business that they are running out of things to ask for.

"UK fintech companies have a big advantage since UK government and regulators have open dialogue with fintech companies and modify regulations to support them, compared to state-by-state regulation in the US. Europe is also on the doorstep of UK companies wishing to expand."

"London has more ingredients than anywhere else in the world for starting a financial services company, but we must continue to attract talent."

Findings from the UK survey: 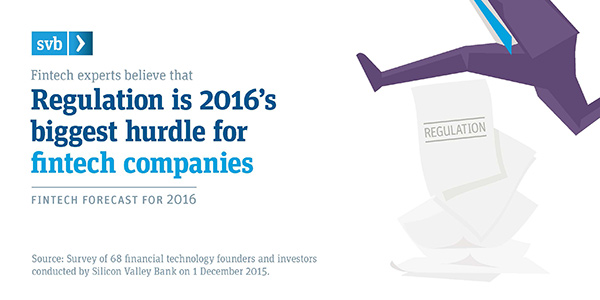 For more than 30 years, Silicon Valley Bank (SVB) has helped innovative businesses and their investors move bold ideas forward, fast. SVB provides a range of targeted financial services and expertise through its office in the UK. With commercial and international banking services, SVB helps address the unique needs of innovators. Forbes named SVB one of America's best banks (2015) and one of America's best-managed companies (2014). In 2014, SVB was recognised as Service Provider of the Year for the third year in a row at the Investor Allstar Awards in London.