Post-pandemic inflation targeted the “old economy.” High inflation readings released in October had structural underpinnings, including a shortage in labor and lack of investment in the “old economy” (polluting industries like oil drilling and copper mining). Investment in more traditional industrial businesses can take a decade or more to show healthy returns.  In contrast, investments in newer sectors like BigTech are providing quick scale, higher secular growth and great margins. Investors may expect industry-specific pricing spikes as was observed with natural gas in October and with lumber last spring.

All-weather dollar. The US dollar is in a unique position relative to its peers in that it tends to gain value both when the US economy is strong and when there is significant turbulence in financial markets. Therefore, the dollar gained in September when equities swooned and held steady when the markets recovered in October.

Central banks reduced quantitative easing. Developing countries have communicated interest rate increases. In addition, the central banks of the US, Canada, Australia, and others all recently indicated quantitative easing is now being reduced or ended completely. Financial market reaction was muted. The Bank of England was the only central bank to surprise the markets by not lifting interest rates as was expected by the FX markets. When the UK central bank left rates unchanged at 0.10% the British pound sank 1.5 percent.

US GDP, consumer spending slowed. Third-Quarter GDP slowed to 2% growth, caused by supply chain disruptions and a surge in Delta variant cases, leading to a concomitant reduction in consumer spending. Theoretically transportation bottlenecks and shortages should remedy over time, although labor shortages may persist. The US dollar’s reaction to a weaker GDP is relative to the similar slowdowns in other countries. The UK, Japan, China, Brazil and many others’ slowdowns were worse than expected. The Eurozone economy beat expectations by growing 3.7% in Q3 vs. prior year. 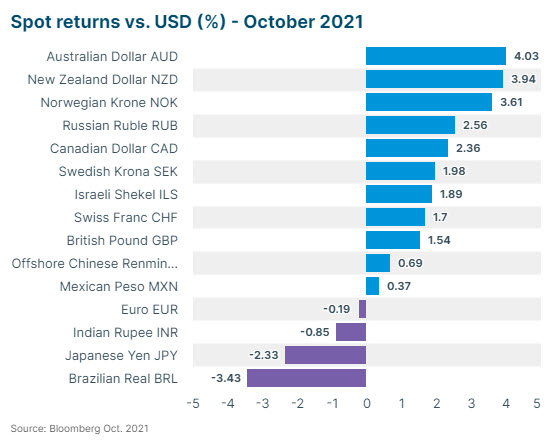 Cryptocurrencies could face increased regulation. In October, Bitcoin increased 50% and Tether issuance exceeded $70B. Generally, unregulated markets like cryptocurrencies tend to stretch the boundaries of common sense, eventually drawing excessive regulation and the possibility of collapse. That said, the Biden administration recently released a report seeking more regulatory oversite around “stablecoins” (cryptocurrencies that peg their price to other cryptocurrencies, exchange-traded commodities or fiat money—money made legal by government decree). Even so, Tether, the world’s largest stablecoin, purports to have one US dollar behind each and every Tether. Currently, stablecoins are not required by law to provide audits on whether or not dollar reserves backing these cryptos actually exist. Cryptocurrencies can be compelling payment alternatives but if there is a global meltdown of stablecoins, the safe-haven US dollar will see a significant, albeit temporary, boost.

Post-pandemic surge in demand propelled energy commodity prices. The price of natural gas hit a 13-year high in October as demand surged globally to fill storage before winter. Other energy commodities like coal and oil also hit highs helping exporting currencies including Australia, Norway, and Canada. After peaking mid-month, natural gas prices then fell 16% on forecasts for a warmer winter highlighting the volatility.  Although gas prices tempered, and supply constraints and bottlenecks prove temporary, the post-pandemic demand for energy is expected to show significant increases next year. The global economy will likely continue to gain momentum in 2022 causing the US dollar to lose value relative to commodity and emerging market currencies.

Corporate profits increase despite supply-chain issues, inflation. The S&P 500 gained 7% in October hitting an all-time high on the last trading day of the month. The NASDAQ and Dow also are reaching historical highs. In spite of supply-chain issues, investors generally see equities as a good place to be during periods of inflation. Maersk, the world’s largest container shipping company is a good example of why corporate profits are up. As the number of ships waiting to be unloaded at US ports continues to increase, Maersk sees no end in sight for the supply chain crisis. As such, Q3 profits were the highest in the company’s 117-year history. Many investors see more gains for the global economy over the balance of this year and next.  The risk-on sentiment will likely weigh on the US dollar.

An increase in the Federal Funds Rate? The Federal Reserve ‘Dot Plot’ shows where FOMC members believe the federal funds rate will be in future years. After its November FOMC meeting, the Fed was generally dovish. This after a week when inflation numbers showed a 4.8% increase for September. Although the Fed announced tapering will begin, Chairman Powell pointedly remarked “This is not the time to raise rates.” The next Dot Plot will be published in early December. If FOMC voting members pull forward the anticipated start date for interest rates increases, investors may see a sudden increase in the US dollar.

Increased fiscal spending. This month, on top of the $1.9T coronavirus relief package approved in the spring, Democrats finally agreed on a $1T infrastructure plan—a figure financial markets may more easily digest. This is because financial markets prefer a more modulated political agenda rather than dramatic shifts in spending and tax. In this case, investors may see the longer-term infrastructure plan as money well spent, adding not too much to the deficit and keeping financial markets from panicking. The impact of additional fiscal spending on the dollar will be neutral as most other developed nations are also spending heavily in the post-Covid economy.

Higher demand for commodities. Prices for oil, base metals, ore and agricultural products increased on higher demand and transport bottlenecks. Going forward, demand will remain strong but vary depending on industry. For example, coal for export is less likely to continue to see strong demand as climate change commitments curtail its use. In addition, ore exports from Australia and Brazil may slow as China’s property market stagnates. Energy prices will remain well-bid as the global economy recovers. The Canadian dollar and Russian ruble will likely benefit, while energy importers like the Indian rupee may see a decline.

Ivan Asensio, Ph.D., Minh Trang
Read more
You are now leaving Silicon Valley Bank (SVB)
You will be directed to a different website or mobile app that has its own terms of use, visitor agreement, security and privacy policies. SVB is not responsible for (and does not provide) any products, services or content at the third party site or app, except for products and services that carry the SVB name.
I understand, let's proceed Stay on SVB.com