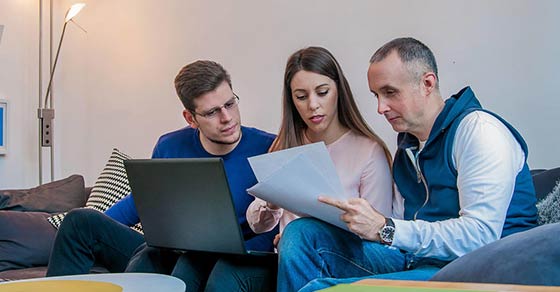 As Joshua Greenough began opening up about his idea for a startup, a coupons app called Bankons, friends and family got excited. Some, including his mother-in-law, offered to invest.

Grateful as he was for her support, the offer gave him pause. “As a founder, you have a moral obligation,” Greenough says. “What happens if the business fails? Does the person really understand the risk involved?” After pondering those questions, he got back to his mother-in-law – “I said no.”

“What happens if the business fails? Does the person really understand the risk involved?” After pondering those questions, he got back to his mother-in-law – “I said no.”

Greenough, however, said yes to others in his inner circle, including his father, a finance executive with more than 20 years of experience. His father clearly understood the investment risk. What’s more, he stood to benefit, albeit intangibly, even if Greenough’s startup failed. “His bet on accelerating my own career was his own downside protection,” Greenough says.

Not every entrepreneur has a veteran CFO at the ready, but Greenough’s experience offers powerful lessons for anyone seeking to raise startup funds from friends and family.

The lessons are especially important, given the outsize role friends and family investments play in the startup ecosystem. A 2014 survey by the Kauffman Foundation showed that 40 percent of startup funding came from friends, family and business acquaintances. In all, friends and family contribute tens of billions per year to new ventures, and the average individual investment is $23,000, according to crowdfunding site Fundable.

Be clear about the risk

Given that, it’s no surprise that many entrepreneurs take friends and family investments for granted. But mixing money and personal relationships can be risky, especially when things go south. If you want to preserve relationships no matter how your company ultimately does, your No. 1 responsibility is to be candid about the risks.

“Mixing money and personal relationships can be risky”

“The one thing I stress the most is that the downside is zero dollars,” says Sarp Sekeroglu, CEO and cofounder of Water Pigeon, echoing Greenough and scores of other founders. “If you’re relying on this money for anything important, do not make this investment in me or anybody else.”

Indeed, ending up with zero dollars is not the exception, but the norm. One in five startups fail in its first year and half fail by their fifth year, according to the Bureau of Labor Statistics.

Of course, entrepreneurs start companies because they believe in themselves and their ideas. Their optimism can be contagious. So after clarifying the risks, picking the right fundraising strategy and making sure any transactions are properly documented, what else do you need to think about?

There are some ways to craft a pitch tailored to family and friends. A close relative might appreciate hearing about your idea face-to-face, whereas a former colleague that you’ve kept in touch with over the years might accept an email.

Danny Harris, a founder who recently launched mobile app GMDY, emailed about 40 people. Most were close friends; some were family and colleagues. And all had some familiarity with his idea for a sportswear shopping app. “There was no secret with the group that I was reaching out to,” Harris says.

He could have benefited from more personal outreach. “It’s easy to ignore emails”

While Harris was able to raise the money he needed, he says he could have benefited from more personal outreach. “It’s easy to ignore emails,” he says.

After you’ve gotten some interest, a major question that comes up is how much you should disclose? The answer depends on who you’re talking to.

For someone who is unfamiliar with business and startups, keep it at a high level. Greenough recommends you describe the opportunity, discuss timelines and the milestones you hope to achieve and maybe talk about the size of the team you plan to build.

Going into the financial nitty-gritty is probably not necessary. “Unit economics and total addressable market are not relevant to the conversation because there’s no judgment and expertise around that,” he says.

For a savvier investor or business operator, consider sharing a more detailed game plan. “I would layout the goal for the year and three years,” says Sekeroglu. Here, you might want to discuss specific metrics, like the number of units you expect to sell or the profit margin you’re targeting, just as if you were pitching a professional investor, he says. And like with any pitch, do not overpromise, he adds.

Once you’ve raised a family and friends round, managing expectations can be tricky. Some family members and friends may overstep and feel their investment gives them a say in business matters. Others may think it’s okay to pester you with calls seeking updates.

Be clear with investors that they will all get periodic updates

Greenough recommends being clear with investors that they will all get periodic updates at the same time, perhaps monthly or quarterly. “Just build that habit,” he says. (Learn  tips on what to include in those updates..) While he still had to field investor calls from time to time, the regular updates kept everyone on the same page.

What’s more, they helped to foster a team spirit around his startup, as friends and family cheered whenever he reported milestone or win. “It felt like (they wanted) to be in the arena and in the journey with you, to celebrate those wins,” says Greenough.

Prepare to mature your business towards traditional financing

If your business starts gaining traction, it may be tempting to lean on your friends and family even more. And why not? They too may be starting to taste success, so why should you deny them more potential upside?

As tempting as that may be, it’s a crutch you should avoid. Your startup will likely do better over time if you go through the disciplined assessment required when pitching professional investors.

Finally, if you have friends and family who can add value besides money, consider it a huge asset and don’t be afraid to lean on it. Greenough realized this firsthand when his business was on the verge of going bust, and being able to tap his father’s experience proved to be a lifeline. He reached out to him, and over a dinner, made three points. “I need your experience,” he recalls. “I need to give you an investor update. And I need you to be my dad.”

Knowing Greenough had built something of value, his father pushed him to get a $50,000 bridge investment. That proved to be enough to keep the company afloat until he was able to sell it to Capital One.

All his investors ultimately ended up with a modest gain, which given the company’s brush with failure, was pretty good. “We were about to go to zero,” he says. “So yes, they were happy with the outcome.”

There’s a lesson there too. Your investors don’t want any surprises. Be transparent with your friends and family and keep them in the loop about your ups and downs. It should help smooth things over especially if you hit a rough patch or worse.

If you found this article helpful, please check out our Startup Insights for more advice around cap tables, dilution, and finding angel investors.

Share this article:
Written by
Lewis Hower
Lewis has over a decade of experience in helping high-performance startups through specialized solutions in research, business development and investments.