In the early throes of the COVID-19 pandemic, during its fever pitch in New York City, Marc Andreessen published his influential essay “IT’S TIME TO BUILD”, decrying the general failure of our institutions to prepare for or respond to the landfall of coronavirus in the United States. The essay was, however, about much more than this pandemic. It was about a perceived decay in our desire to pursue tangible innovation, a decay most perceptible in areas where we need it most.

Just over three months hence, we have developed solutions that have slowly restored a modicum of normalcy. On the whole, they remain makeshift and low-tech. COVID-19 test results often take weeks, and contact tracing is nearly out of the picture. Zoom and collaborative software make working from home possible but not nearly as rich as collaborating with colleagues in person. 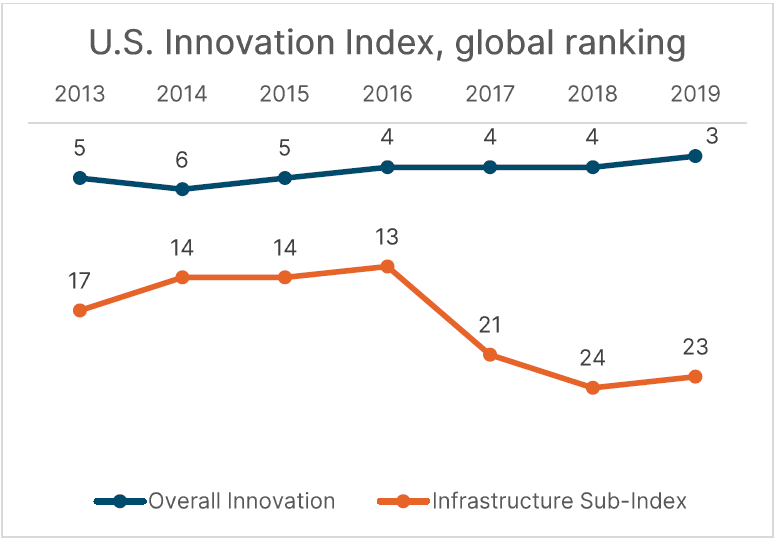 While its consistently high overall ranking indicates the high innovative potential of the United States, its ranking in the infrastructure sub-index has fallen off considerably. Source: Global Innovation Index

Coronavirus didn’t cause the problem; it exposed it. Andreessen’s point, with which we agree emphatically, is that it need not be this way. We know first-hand the innovative potential of the tech ecosystem. Still, we must stop operating under the assumption that the future will create itself. We need to prioritize the most ingenious technology, even when its potential benefits aren’t glaringly salient today. Tomorrow, those benefits could be dearly needed.

SVB is in a position to help catalyze human ingenuity. Our Frontier Tech Practice serves startups at the far end of the innovation spectrum. Our clients work on diverse problems where hardware, software and data intersect. Whatever their niche, these companies are building.

The need to build has never been stronger. In this post and across an upcoming series, we’ll talk about the problems that need solving in a COVID-19 world and beyond, whether in the near term or on intergenerational timescales, and startups’ inspirational work to address them.

The fourth industrial revolution and the relocalization of production

The current spike in trade tensions and supply chain disruptions due to COVID-19 signal a greater problem: the goods we consume, many of them essential, are dependent upon the well-functioning of global order. The project of improving this well-functioning is vital, but as long as we trade there will be trade uncertainty and its parallel concerns relating to sustainability, labor standards and intellectual property.

Frontier industrial technologies have the power to circumvent these issues. Automation, additive manufacturing and other technologies can democratize the ability to produce, stimulating entrepreneurship. Different countries have different resource endowments, but all countries can benefit from industry 4.0 technologies.

Bright Machines is an automation-focused company offering comprehensive solutions to factories. Via a “software-first approach,” the company enables manufacturers to bring the production process closer while also making it cheaper and more flexible. Bright Machines stands out among automation companies for two reasons. First, it is a great case of applied science; artificial intelligence, computer vision and smart robotics — all are integrated into its systems. Second, it has shown itself to be extremely responsive to current events, launching a $50M fund that allows customers to defer payments until 2021. In the current environment, many manufacturers cannot wait to incorporate advanced technology, given the problems posed by crowded factory floors and disperse supply chains during the pandemic.

In addition to rethinking production, we must also rethink the delivery of finished goods. Enter micro-fulfillment, the domain of Fabric, whose robotic fulfillment centers make delivery exponentially faster, giving much-needed flexibility to operators of grocery stores, general merchandise retailers and other businesses. Technology in this space serves to make the economy more local, reliable and stable.

Despite improvements in public transportation and the emergence of many mobility solutions, our cities grow more congested every year. Of the 400+ cities included in the TomTom Traffic Index report, 75% have seen congestion worsen or remain stable over the past decade. Why is this? One important reason is that the pace of urbanization and the explosive economic growth of certain hubs outstrip the pace of infrastructure development.

To solve this problem, more than mere technological development is needed. There must also be impetus to design forward-looking regulation accompanying innovation. Absent this regulation, it is possible for mobility tech to do more harm than good.

One of the boldest and most potentially effective ways to reduce congestion is to add the vertical dimension. Vertical take-off and landing (VTOL) is a frontier technology with a rather self-explanatory name. Companies in this space build aircraft that are typically autonomous and allow people to navigate within a metro area without adding to roadway congestion.

It’s not often discussed that this method has already been adopted by elites in some of the world’s most congested cities. In São Paolo, for instance, executives commute in helicopters to avoid crime and gridlocked traffic below. An estimated 700 helicopter flights occur daily. This is an interesting manifestation of inequality in a city where one-fourth of the population lives in poverty and a cautionary tale that innovative mobility solutions should not be reserved for a lucky few.

For 10 stealthy years, Joby Aviation has been developing a VTOL aircraft for urban transportation. Fundamental to the company’s philosophy is that these aircraft should be made available and affordable to all, offered as a priced service as opposed to owned by end users — which also helps ensure that they are flown by experienced pilots.

Lilium is another company in the VTOL space, with a focus on regional city-to-city transportation. By connecting urban zones in a larger region, air taxis can allow central congestion to disperse over a larger metropolitan area. Lilium aircraft use 36 electric engines for precise control, minimizing instability during take-off and transition into forward motion.

The future of work

A recurring theme of the COVID-19 pandemic is its tendency to accelerate trends that predated it. Distributed work is perhaps the best example. For four months we have commuted to a virtual office, trying our best to connect, comingle and collaborate in a way that sufficiently emulates the physical office. The conference room is now a Zoom call, and the whiteboard is now a collaborative document.

A recent survey by Sykes shows that 40% of employees feel less productive while working from home, whereas 26% feel more productive. More importantly, a whopping 81% said “no” when asked, “Do you feel like you could perform your job just as effectively working at home?” The simple fact is that we have not found a way to make working from home feasible for a majority of employees. This will be an issue even after we return to the office post-pandemic. As the digital world absorbs more of the larger economy, colocation will continue to decline. How do we keep work from becoming alienating, distant and lacking in richness?

Let’s start at the very frontier. Artificial Augmented and virtual reality will be the next revolution in communication, similar in significance to the telephone. Many companies are working not only on the underlying software but on innovative ways to integrate the hardware into our lives. Mojo Vision, for instance, is developing contact lenses that project a digital display.

Others are helping make long-due iterations to existing tech. One simple issue we encounter continually while working from home is connectivity. Plume brings office-grade connectivity with an adaptive Wi-Fi system that learns users’ habits and makes advanced optimizations to allocate bandwidth where it is needed most. Plume integrates a broader smart-home system that connects devices and detects cyber threats. The company has raised more than $150M, with some of the largest corporate venture capital funds participating (as well as debt financing from SVB).

Then there are companies like DisplayTen (DTEN), an official partner of Zoom that develops hardware specifically for remote work. Among its many office solutions, DTEN offers an all-in-one home display called DTEN ME, designed specifically for working from home. DTEN ME is more than just a screen; it is a tool for actively collaborating on and annotating documents, conducting meetings in a variety of formats and communicating with co-workers in high definition. This is a step forward from the half-baked use of conventional computers and display monitors to hold collaborative meetings.

The infrastructure to combat existential risk

Oxford philosopher and existential risk expert Toby Ord recently published a book in which he estimated that humanity has a five-in-six chance of making it to 2100. While these odds might be encouraging for calling a poker bet, they are horrifying when applied to billions of human beings and their entire potential progeny, who might number trillions more.

What can be done? There are ways to increase those odds and ways to hedge against them. Many of the companies we work with are forging new business models grounded in sustainability or working for positive social impact, doing so in “traditional” verticals. Exponential technological progress has always had its unsung heroes.

A growing number of futurists and technologists, however, perhaps most notably Elon Musk, have championed the idea that we must also start working toward a plan B. In this arena, one of the most exiting verticals is space technology, whose companies are laying the foundation for a future among the stars.

LeoLabs leverages its global network of radars to precision-map objects orbiting the Earth. This is already crucial to the satellite launch industry and will be equally critical for an eventual reality of frequent launches to the Moon, Mars and beyond.

Relativity Space is working to rapidly accelerate the development of infrastructure for aerospace. It is leading the way in the application of intelligent manufacturing like 3D printing and advanced automation in this vertical. It puts its vision bluntly: “We believe in a more inspired future with people thriving on Earth and on Mars. In the early days of settlement, intelligent automation and lightweight, compact 3D printing are fundamental technologies needed to quickly establish a new society with scarce resources.”

The above categories are not an exhaustive list; frontier tech casts a wide net, encompassing many more fascinating companies in such areas as quantum computing, augmented and virtual reality, autonomous vehicles and much more. In the coming months, we intend to publish a series of posts demonstrating how companies around SVB’s ecosystem are answering the call to build.

Want to be part of it? If you want to come to the frontier and help make an actual dent in the universe, let’s connect.

Written by
Ann Kim
Ann leads our Frontier Technology group and focuses on VC-backed high-growth companies in aerospace, transportation, robotics, IoT and virtual reality.
Sign up for insights from across the innovation economy
Subscribe now

Our latest State of the Markets report for Q3 2020 reviews the scattered global economy recovery taking shape following the rapid downturn caused by the coronavirus pandemic.