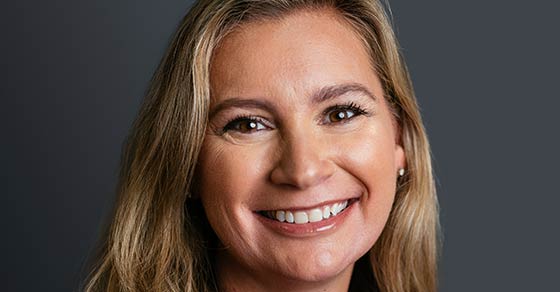 In her climb from accidental bookkeeper to tech company CFO, Amy Kux has seen a bit of everything: small businesses and not-for-profits, agencies and venture-backed startups, enterprise software and mobile gaming, runaway growth and failure—even fraud.

And reflecting on a profession that’s purportedly all about numbers, the key to success, she says, is understanding people—both yourself and others.

It all starts with who you choose to work with. “Always work for good people,” Kux says. “You work for a couple of bad ones, and then you realize what’s important. When I look back at the progression from where I started and how I grew, the best people were the ones that were humble and took the time to get to know me. And when they pushed my boundaries, they did it in the most productive way.”

A Bay Area native, Kux is now CFO of Unbabel, a fast-growing Series C startup that offers AI-backed translation services for businesses. But she didn’t initially set out to pursue a career in finance. After earning a degree in psychology, Kux took a job at a mom-and-pop glass company in the East Bay. Shortly after she joined, the bookkeeper got sick, and Kux took over.

“I realized I loved numbers,” Kux says. Behind that realization was Kux’s understanding that a company’s books gave her a window into how it ran. “With me, the numbers tell a story,” she says.

A couple of years later, the story behind the numbers would get interesting. Kux was working as an accountant and interim controller at a not-for-profit organization when she was faced with an unusual assignment: unraveling a scam.

An official at the organization had been stealing from the institution for years. “I worked really heavily with the audit firm to find every penny I possibly could find that the official had embezzled,” Kux says.

Of course, no one can plan—or wish—to have that kind of experience. But Kux says almost everyone will find themselves in a sticky professional situation at some point. She tries to make the most of it.

Dealing with a misdeed taught her to be extra diligent when it came to establishing checks and balances, and in demanding transparency and honesty from the people she worked with.

Understand your strengths, leverage your passions

Years later, Kux would get a piece of advice that she likes to share with up-and-coming finance professionals. Of the dozen or so skills that make a great finance executive, find three that are most important to you and build your career around them.

Looking back, Kux doesn’t hesitate to name her three strengths: building foundations, operations and strategy. She discovered them gradually, and they helped guide her climb through the finance ranks.

At ClairMail, a mobile banking software startup, Kux worked hand in hand with engineers and product people for the first time. And she began to understand the vital role that finance can play in supporting those functions.

“I like to work across functions and figure out how to operationalize almost every aspect of a business,” she says. To do so effectively, she had to build relationships based on trust with key people across the company. Those people, in turn, would confide in her, allowing her to hear about challenges various groups faced before they turned into big problems.

Kux also developed a keen sense of the strategic role finance can play. “I love being able to see the wider picture, as well as what’s in front of me,” she says. While finance executives sometimes look at marketing expenses as vast sinkholes of resources, Kux worked hard to understand the ways marketing spend could be tied to revenue differently in a SaaS company or a consumer business. “When marketing and sales work well together, they create the common language of how leads and marketing campaigns translate into sales,” she says.

A builder above all

While Kux loves getting into the weeds of operations and strategy, she doesn’t hesitate when asked to name her biggest strength and greatest passion. “I love building foundations,” Kux says. She leaned into it time and again and got better at it every time.

Her first task at Booyah, a mobile gaming pioneer, was to build from scratch accounting and finance departments, which the founders had outsourced. It allowed the company for the first time to break out its P&L by games and understand which of its many games actually drove the business.

“Not everyone is awesome at everything that they encounter for the first time.”

That same passion drove her to Cloudflare, a fast-growing SaaS business, where she faced some less-than-glamorous tasks: pulling data from QuickBooks, which she ran on a single Mac with a cracked screen, and moving it to the cloud, building a team from scratch and dealing with basic office logistics. “I remember being on my knees, seven months pregnant, reorganizing the file cabinets,” she says.

During her three-year tenure at Cloudflare, which went public in 2019, Kux helped revenue more than triple into the tens of millions of dollars.

Embrace your fears and ask for help

While leveraging your strengths may seem obvious, Kux has learned it’s equally important to understand your weaknesses and not let them get in the way. There’s no better place to learn that than at hyper-growth startups, where inevitably you’ll be tasked with doing things you’ve never done before. “Not everyone is awesome at everything that they encounter for the first time,” she says. “I had to rely on my own insecurity to push myself to ask people for help. It was really about acknowledging and accepting my own limitations.”

Shy and introverted, Kux still gets nervous when she must speak in public. Her solution? Seek public speaking opportunities so she can get better at it. “I try to flip things in my head to where I'm becoming fear-driven rather than fear-averse,” she says. “Every time I go into a public speaking situation, I'm scared, but I'm proud of myself at the end. And I'm hoping that my pride will overtake my fear.”

Similarly, asking for help never came naturally. “My skill set could have improved vastly earlier on if I knew how to lean on a network,” she says. “Now, all I do is network.”

“Don’t be afraid to get into something just because you’re not 150% sure you can do it.”

Networking can be especially crucial for women, who are underrepresented in tech, Kux says. “I’m a huge advocate of women in finance,” she adds. “I work with women a lot about being open about what we make to help us fight for our salaries.” Peer support can also help women overcome culturally-ingrained fears. “Don’t be afraid to get into something just because you’re not 150% sure you can do it,” she says.

Redefining success: It’s not about the numbers

There have been times when Kux has wanted to dial back. But her ambition and love of building companies have kept her seeking ever-greater challenges. That’s how early this year, she landed at Unbabel. “It was an instant love affair,” she says of meeting founder and CEO Vasco Pedro and hearing his vision for turning the startup into a machine translation powerhouse. She signed on and quickly assembled a team of company builders she had worked with before.

“They want this to be my first IPO,” Kux says. That’s the kind of career milestone that would thrill most finance professionals. But Kux shrugs. In an IPO, she says, consultants end up doing much of the work. While leading an IPO might give her an “ego boost,” she says her passion is elsewhere. “I love to be hands-on,” she says. Her top priority is to help Unbabel—and the team she’s chosen to work with—to win. If that involves an IPO, great. But she’s not about to measure professional achievement by the number of notches on her belt. “I’m defining success more and more by relationships and less by title or salary,” Kux says.

What are SPACs? Read this blog to discover what you should know about SPACs, the benefits, SPACs vs IPO, and more.
Read more