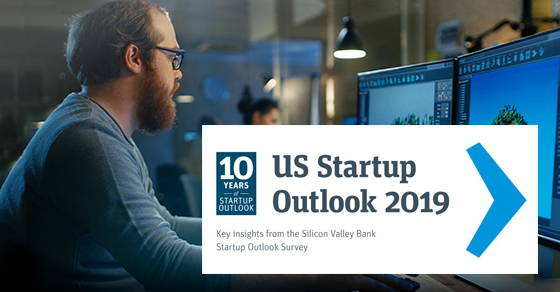 US Startups Expect Business Conditions to Improve Despite Increased Uncertainty

SANTA CLARA, Calif., February 20, 2019 - Silicon Valley Bank (SVB), the bank of the world's most innovative companies and their investors, released the 10th anniversary edition of its Startup Outlook Report today. The 2019 report series finds that despite economic and political uncertainty across the globe, startups are generally optimistic about their business opportunities, and they plan to raise capital and expand their workforces this year.

Based on a survey of 1,400 startup founders and executives primarily in the US, the UK, China and Canada, Startup Outlook reveals respondents’ thoughts on business conditions, funding, exits, hiring, workforce diversity and public policy issues. The reports also gauge the concerns of US and Chinese startups about trade tensions, the impact of Brexit uncertainty on UK startups and the sentiment of Canadian startups about government support. All four country reports also look at gender parity in tech leadership roles for each country.

“It’s difficult to build and scale companies under the best circumstances,” said Greg Becker, CEO of Silicon Valley Bank. “With added uncertainty related to economic and political volatility, it’s even more of a challenge. The good news is, overcoming challenges is what drives entrepreneurs. Startups tell us they are optimistic about opportunities to fund their businesses, expand their workforces and continue innovating.”

“While much has changed in a decade, hiring top talent has been cited as a top challenge since our first report, and it’s the same in the UK, China and Canada. Entrepreneurs seldom speak with one voice, but this report underscores the unified need to find solutions to accessing talent — or risk a slowdown in innovation.”

Following are the key findings from the US survey, which is based on responses from 809 executives at US technology and healthcare startups. Most US Startup Outlook 2019 respondents are founders or executives of companies with fewer than 25 employees and less than $25 million in annual revenue. Reports covering the UK, China and Canada are available here.

For additional survey results, including a closer look at hiring, fundraising and respondents' views on public policy issues, please visit: https://www.svb.com/startup-outlook-report-2019.  SVB will publish an in-depth report on Women in Technology Leadership in H1 2019.