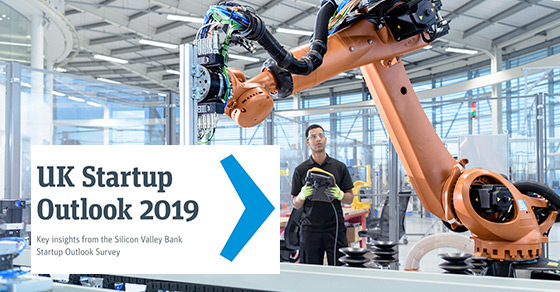 Three out of four UK entrepreneurs anticipate Brexit would hurt the innovation economy, according to a survey by Silicon Valley Bank

LONDON – 20 February 2019 – Silicon Valley Bank (SVB), the bank of the world’s most innovative businesses, enterprises and their investors, released the 10th anniversary edition of its Startup Outlook Report today. The report is based on a survey of 1,400 startup founders and executives primarily in the UK, the US, China and Canada. Startup Outlook reveals respondents’ thoughts on business conditions, funding, exits, hiring, workforce diversity and public policy issues, including Brexit and business relocation plans.

“As Brexit discussions continue, 75 percent of UK entrepreneurs surveyed fear that leaving the EU would have a negative effect on the innovation economy in the UK, and their greatest public policy concern is a lack of access to talent,” said Erin Platts, Head of Relationship Banking, Europe at Silicon Valley Bank. “Nevertheless, 81 percent of UK startups are planning to expand their workforces in 2019. The fundraising landscape also looks healthy, as 75 percent successfully raised capital last year. In addition, 83 percent say they have no plans to move their headquarters from the UK, underscoring the optimism that still exists despite Brexit related uncertainty.”

Following are the key findings from the 2019 UK Startup Outlook Report. Most Startup Outlook 2019 respondents are founders or executives of companies with fewer than 25 employees and less than $25 million in annual revenue. Reports specific to the US, Canada and China are available here.

For additional survey data, including a closer look at hiring, fundraising and respondents’ views on public policy issues, please visit: https://www.svb.com/startup-outlook-report-2019/. UK survey data is based on responses from 108 UK technology and healthcare entrepreneurs. SVB will publish an in-depth report on Women in Technology Leadership in H1 2019.

For more than 35 years, Silicon Valley Bank (SVB) has helped innovative businesses, enterprises and their investors move bold ideas forward, fast. SVB provides a range of targeted financial services and expertise through its office in the UK. With commercial and international banking services, SVB helps address the unique needs of innovators. The UK's leading technology and life science businesses, in all stages of development, look to SVB’s niche expertise, experience and unparalleled network, as they grow at home and tackle new markets abroad. Learn more at svb.com/uk. @svb_uk