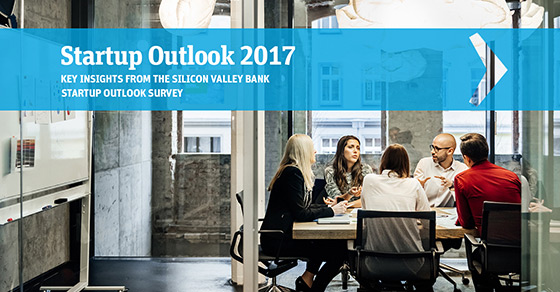 SANTA CLARA, C.A. – February 14, 2017 – Silicon Valley Bank (SVB), the bank of the world’s most innovative companies and their investors, released its eighth annual Startup Outlook report today. The U.S. report is based on SVB’s survey of more than 550 executives at technology and healthcare startups in the U.S. and examines their insights on business conditions, fundraising, hiring and public policy issues, including the impact of regulation, taxes and immigration policy. An expanded series of reports offers international perspectives from startup leaders in the U.K. and China. Nearly 950 executives in total completed the annual survey that is intended to take the pulse of startups around the world.

“There is more potential now for innovation than in the last 25 years, despite some political uncertainty in the U.S. and abroad,” said Greg Becker, President and CEO of Silicon Valley Bank. “We can attribute this to the breadth of opportunity created by old world industries that are being transformed by technology globally – whether you are in San Francisco or Shanghai, Berlin or Boston.”

Becker said, “This year’s survey shows that access to talent is a persistent challenge for startups. Although the stat dropped slightly this year, 90 percent still say it is challenging to find the talent they need to grow their business. With this in mind, changes to immigration policy have the potential to add a new complexity. One-quarter of the U.S. startups we surveyed indicate existing government policies caused them to move operations overseas, and of those, 38% cited U.S. immigration policy as the reason. It’s in the best interest of the U.S. to focus on both education and high-skilled immigration to increase the skilled talent pool for these job-creating companies.”

The Startup Outlook survey was conducted in November 2016 immediately after the U.S. presidential election. Most respondents are startup executives of companies with fewer than 50 employees and less than $10 million in annual revenue: