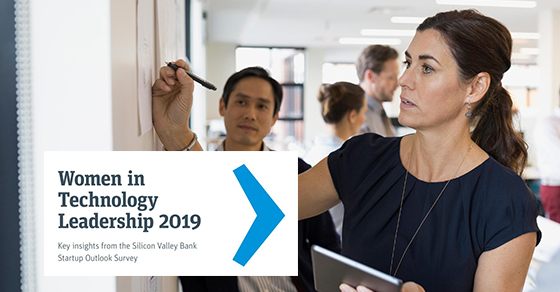 Startups Actively Seek to Increase the Number of Women in Leadership Roles, but Progress is Slow

SANTA CLARA, Calif.–March 6, 2019 – Silicon Valley Bank (SVB), the bank of the world’s most innovative companies and their investors, released its Women in Technology Leadership 2019 report. The report shows that while there has been some progress over the last year, a lack of gender parity persists. Just 56 percent of startups have at least one woman in an executive position, and only 40 percent have at least one woman on the board of directors. The Women in Technology Leadership 2019 report is part of the 10th anniversary edition of SVB’s Startup Outlook Report, which is based on a survey of 1,400 technology and healthcare startup founders and executives primarily in the US, the UK, China, and for the first time, Canada.

“We have measured gender parity in startup leadership since 2014 and the numbers continue to be concerning. We must do better,” said Greg Becker, CEO of Silicon Valley Bank. “There is, however, a bright spot in that startups are recognizing the pressing need to be more proactive; 59 percent now have programs in place to help close the gender gap. While there is still a great deal of work to be done, we believe that the innovation economy is making progress and sees that increasing gender diversity as an important way to attract skilled talent, one of the biggest challenges facing startups.”

SVB’s Women in Technology Leadership 2019 report measures the percentage of women in leadership positions and compares startups’ views of the innovation economy based on the gender of their founders. Survey findings include:

SVB also asked startups to describe the programs they have in place to support gender diversity. The most common programs include creating a flexible work environment, recruiting/interview techniques and leadership development.

“Over the past couple of years at Gapsquare we have seen tech companies using data to narrow gaps,” said Dr. Zara Nanu, CEO and Co-Founder of Gapsquare, a UK-based big data company using cloud-based software to analyze and narrow the gender pay gap, as well as building equality and diversity into company practices. “And there are a few initiatives that are already providing results. Some of the most successful initiatives we have seen focus on providing flexible working for all employees, and finding new and innovative ways to think about hiring new talent as well as promoting employees within the company. We have also seen progress in companies which analyze all of the reward and compensation elements and restructure them to ensure they benefit everyone.”

The full report is available at www.svb.com/women-in-technology/.