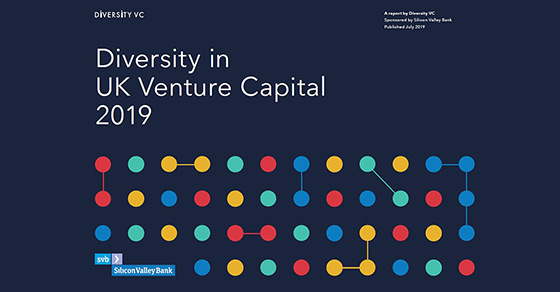 ‘Diversity in UK Venture Capital 2019’: Change is happening, but not fast enough

Share
UK non-profit Diversity VC urges venture capitalists to build a more ‘sustainable and responsible’ industry, as representation of women at the top of the industry remains static since 2017


LONDON — July 11, 2019 — Today, non-profit organisation Diversity VC has published ‘Diversity in UK Venture Capital 2019’, a report which analyses the gender, ethnic, education, and career backgrounds of venture capital professionals in the United Kingdom. The report is authored by Diversity VC, and sponsored by Silicon Valley Bank.

This is the most extensive study of the industry to date, the report has analysed 171 UK venture capital firms, employing over 2110 people. This is also the first time that the career background, education and ethnicity of the UK venture capital industry has been analysed.

Breakdown of key findings below

Response from the industry, and insight from Diversity VC

Before the report was published, Diversity VC released the findings to the venture capital industry, in order to gather feedback, and to develop some clear ways forward. The founders of Diversity VC also shared their insight as to why diversity in venture capital matters to the technology industry, and to society at large.

Check Warner, Co-Founder and CEO of Diversity VC: “This report matters, as the venture capital industry has an outsized impact on the rest of the economy. VCs invest in early-stage technology companies, which have the potential to become influential powerbrokers in the future. As venture investors enter the fray so early on, they can make a huge impact on the makeup and culture of the organisations that they fund.”

Lillian Li, Co-Founder of Diversity VC: “This report is hugely important for the VC industry as we truly begin to address more complex dimensions of diversity and to push the industry's engagement with the topic”

Erin Platts, Head of EMEA and President of UK Branch of Silicon Valley Bank: “While it is great to see an improvement in the number of women in the sector, it is critical that the VC industry continues to increase the number of women and ethnically diverse investors in its ranks. Along with Diversity VC, Silicon Valley Bank works closely with its clients and other industry organisations to address this issue, and by working together and increasing transparency we have a greater opportunity to reach gender and ethnic parity in the industry.”

Gender: Change is happening, but not fast enough

Kathryn Mayne, Managing Director, Horsley Bridge International, “The visibility of diversity as a topic has changed substantially, but we’re still in the early innings of it.”

In an industry that requires commercial, financial and legal skills to deliver growth, it is typical for personnel to have a university-level qualification. However, a lack of educational diversity within firms may be inhibiting performance. Research conducted by Gompers & Kovvali (2018) shows that investment teams with diverse educational backgrounds are 11.5% more likely to realise an exit on their investment portfolio than peers with homogeneous teams.

Suranga Chandratillake, General Partner of Balderton Capital, “The incoming generation of venture capital professionals are beginning to get closer to parity from a gender perspective but educational background remains stubbornly biased those from privileged backgrounds.”

Over 40% of UK investors have a finance, banking or consultancy background. Just 12% have experience working in a start-up, scale-up or technology company. At top-tier US venture capital firms, 40% of investors have entrepreneurial experience, and a further 20% have been senior executives at start-ups (TechCrunch, 2015). Our data suggests that greater diversity of experience could be a source of improved returns.

Alice Hu Wagner, Managing Director, British Business Bank, “We focus on diversity because we believe we will make returns with this strategy. We hope in the long term, diversity will be a point of differentiation and competitive advantage for the UK’s tech ecosystem.”

Our study focuses on the implicit link between diversity and performance. However, it is worth noting that diversity without inclusion doesn't work (Hewlett et al., 2013). It follows that firms with inclusive cultures are more likely to succeed than those that have diversity alone. Firms that have hired more diverse teams but haven’t changed their processes, cultures and environments are likely to struggle to maximise the opportunity that a diverse workforce offers.

The future of venture capital must be responsible and sustainable

Travis Winstanley, Research Lead and Co-Founder of Diversity VC, “It is our hope at Diversity VC that the venture capital industry is moving towards a more responsible and sustainable form of investment, where attention is paid not just to generating financial returns, but to the holistic impact that the firms and the companies they run have on the world around them. We believe that responsible investing is the future of the venture capital industry and D&I as an important component of that future.”

Alice Hu Wagner, Managing Director, British Business Bank, “We believe diversity to be a social good. A diverse tech ecosystem is a strong and resilient ecosystem. From that perspective we would want as many diverse components in the ecosystem as possible.”

About Diversity VC
Diversity VC is a non-profit organisation focused on creating a fairer and more diverse venture capital industry. Diversity VC focuses on four key initiatives: Network, we are building a network of VC professionals; Pathway, we work with universities and young people to help firms hire from more diverse backgrounds; Ecosystem, we are working with the current crop of venture capitalists to increase understanding of representation in the industry; and Data, we produce original research that aims to provide a better understanding of the status quo, and how to improve it. The organisation was founded by five industry professionals in 2017.

About Silicon Valley Bank
For more than 35 years, Silicon Valley Bank (SVB) has helped innovative businesses and their investors move bold ideas forward, fast. SVB provides a range of financial services and targeted expertise to companies of all sizes in innovation centres around the world, including the UK. With commercial and international banking services, SVB helps address the unique needs of innovators. Learn more at svb.com/uk.