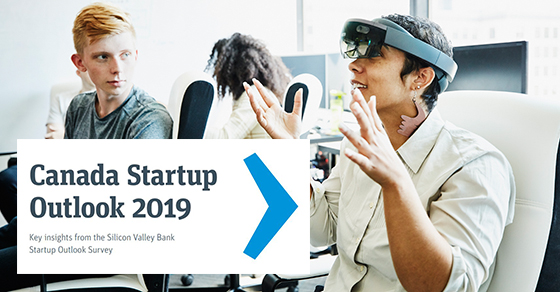 TORONTO – February 20, 2019 – Silicon Valley Bank (SVB), the bank of the world’s most innovative companies and their investors, released its inaugural Canada Startup Outlook report today.  It is part of the 10th anniversary edition of SVB’s Startup Outlook Report, which is based on a survey of 1,400 startup founders and executives primarily in the US, the UK, China and Canada. Startup Outlook reveals respondents’ thoughts on business conditions, funding, exits, hiring, workforce diversity and public policy issues.

More than half of Canadian startup leaders expect business conditions to improve in 2019 over 2018, but like their counterparts elsewhere, they note challenges in raising capital and hiring talent with the skills needed to grow their businesses.

“The Canadian startup ecosystem is vibrant and growing throughout the country,” said Barbara Dirks, Head of Canada for Silicon Valley Bank. “We’re thrilled to release SVB’s inaugural Canada outlook, and share what’s on the minds of Canadian entrepreneurs. Even amid global and economic volatility, Canadian founders tell us that they are optimistic about the year ahead. They are in growth mode – eighty-four percent plan to hire in 2019 – but they are very aware of the challenges in finding enough skilled talent and raising capital.”

Following are the key findings from the 2019 Canada Startup Outlook Report. Most Startup Outlook 2019 respondents are founders or executives of companies with fewer than 25 employees and less than $25 million in annual revenue. Reports specific to the US, the UK and China are available here.

For additional survey data, including a closer look at hiring, fundraising and respondents’ views on public policy issues, please visit: https://www.svb.com/startup-outlook-report-2019/.  SVB will publish an in-depth report on Women in Technology Leadership in H1 2019.

In March 2018 Canada’s Minister of Finance issued an order authorizing Silicon Valley Bank to establish a  branch in Canada, which will commence operations after it receives the approval of the Superintendent of Financial Institutions. Once granted, Silicon Valley Bank will be able to provide in-market commercial banking solutions to private and public technology and life science companies and their investors across Canada.