USD/TWD correlates positively with USD/CNY. China is Taiwan’s most important trading partner, so anything that affects China’s economy affects the economy of Taiwan in turn. The ongoing US-China trade war is an added risk for traders in the TWD, but Taiwan’s central bank actively controls that risk by periodically intervening in the FX market. The positive correlation between movements in the TWD and the CNY helps facilitate trade by lowering currency risk for companies from both countries doing business with one another. 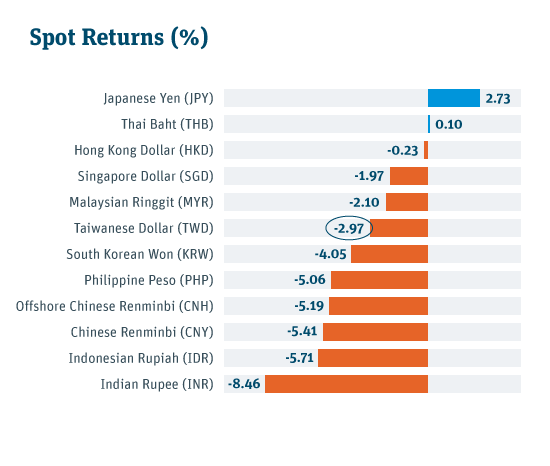 China’s pressure on Taiwan to reunify. China’s President Xi has recently stepped up pressure on Taiwan to move towards reunification with China. At the same time, the US Navy has stepped up military operations near Taiwan in the South China Sea, where China has territorial claims. Things are definitely heating up, but traders/investors have yet to react by moving out of Taiwanese assets and the TWD.

Chinese Lunar New Year fueling TWD strength. Taiwanese exporters normally pay out employee bonuses ahead of this week’s Chinese New Year, and to meet the cash-flow need, they often convert their foreign currency proceeds from export earnings, or sell USD holdings on their balance sheets, leading to buying pressure on the TWD.

Last year, the USD/CNY rose 11.8 percent from 6.2430 to 6.9770 – while at the same time the USD/TWD climbed 7.4 percent, from 28.96 to 31.10. Both currency pairs have dropped lower since then and have done so with low volatility. In the lower window, we can see that the correlation between the two currency pairs has been positive, fluctuating between 0.2 and 0.6, aside from a brief time last October. 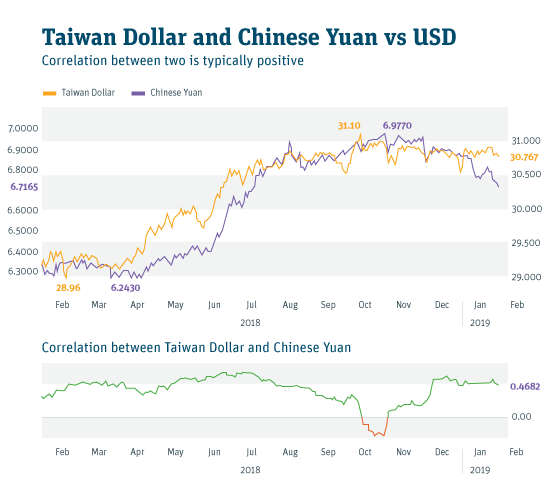 Read how the Chinese renminbi may move as market uncertainty rises on a global scale.

For the full review of what moved markets and the look forward, read our latest FX Monthly Outlook.

For analysis particular to your situation, contact your FX Advisor or email SVB's FX team at fxadvisors@svb.com.