View PDF. Financial market participants came into 2020 with expectations that the 8-year bull run in the US dollar (USD) would finally turn. Then COVID-19 hit.

In-line with previous financial distress episodes, the USD defied expectations and went even higher. The rise was sharp and broad-based, but temporary. Governments and central banks responded to COVID-19 shutdowns with trillions of fiscal and monetary stimuli, resulting in an impressive equity market recovery and a quick end to the fear-driven USD buying. The year 2020 ended with the S&P 500 at its highest peak and the USD in continuing decline versus other currencies1.

Looking ahead, the coming of COVID-19 has created a landscape that may accelerate the fall in the USD. We review the drivers that will be important over the short, medium, and longer-term.

A strong appetite for risk assets is generally associated with a weaker USD as institutional and individual investors in the US are incentivized to deploy capital overseas in search of higher potential returns. In the current environment, combined with near-zero yields in the US, this activity may be particularly strong, resulting in additional selling pressure on the USD.

Momentum is a strong force in financial markets. Investors are rewarded for buying into winning strategies more so than from executing contrarian plays. The USD posted double-digit losses versus most major currencies since the COVID-19 sell-off in March 2020. The strong downtrend has created an overall bearish sentiment among the investment community, which may translate into USD weakness by way of a self-fulfilling prophecy.

Low interest rates dampen the demand for and, by extension, the value of a currency. Current guidance from the Federal Reserve is for policy rates to remain at the zero lower-bound in the US until at least until 2023, while quantitative easing will anchor low interest rates across the term structure2.

Furthermore, on an inflation-adjusted basis, US interest rates look even more unattractive as the yield earned is less than the loss of purchasing power from inflation.

The current account deficit swelled to 3.4% of GDP in Q3 of 20203, an increase of about 75% from pre- COVID-19 levels, indicating that the US continues to spend more overseas than it takes in from foreign counterparts. COVID-19 has aggravated the situation as spending habits have shifted away from services offered domestically (haircuts, restaurants, gyms, shared rides), to goods primarily imported from overseas and procured online. The perennial selling of USD that arises from this represents a headwind for the USD.

Purchasing power parity (PPP) says one unit of one currency should buy the same amount of goods in one country as one foreign unit does in the foreign country, adjusted for inflation. According to one such measure, the US dollar is overvalued versus all other currencies except the Swiss franc, the Lebanese pound, and the Swedish krona4. Furthermore, the Fed’s recent commitment to let inflation run higher than the previous target of 2% would put even more pressure on the dollar according to this valuation approach (i.e. as currencies with higher inflation are expected to depreciate).

The fiscal deficit finished 2020 at approximately $3.3 trillion5, the largest annual sum since 1945 as a percentage of GDP and about three times as much as the deficit in the previous year. A large fiscal deficit simply means the US is living beyond its means, as spending exceeds tax revenues. The shortfall is met through borrowing, primarily through bond issuance.

Deficit spending is not necessarily bad, in fact, carrying some leverage promotes organic growth for an economy, much like it does for a corporation. Deficit spending is also not a new phenomenon for the US economy. However, the annual amount is rising, and the accumulation of the deficits, the national debt, topped 100% of GDP in 2020. Some believe the rapid one-way trajectory of this is hurting the credibility of the USD as a reserve currency, and even putting into question our fiat currency system. Recent strength of gold and crypto currencies can be attributed, at least in part, to this sentiment.

Why this matters now

For years prior to 2020, US-based innovation sector companies have been blessed with US dollar (USD) strength. Most, at the start-up to IPO stage in the lifecycle, are net sellers of USD. In a similar fashion, venture and private equity funds raising USDs for overseas deployment have benefited from increased purchasing power. Specifically, a stronger USD between the time a global fund investment is contracted and when it is funded enhances its internal rate of return (IRR) and other investment performance metrics. (See more on this topic here).

The table below offers some valuable perspective. A year-end analysis of the most actively traded currencies by innovation-sector companies and funds reveals two key findings. 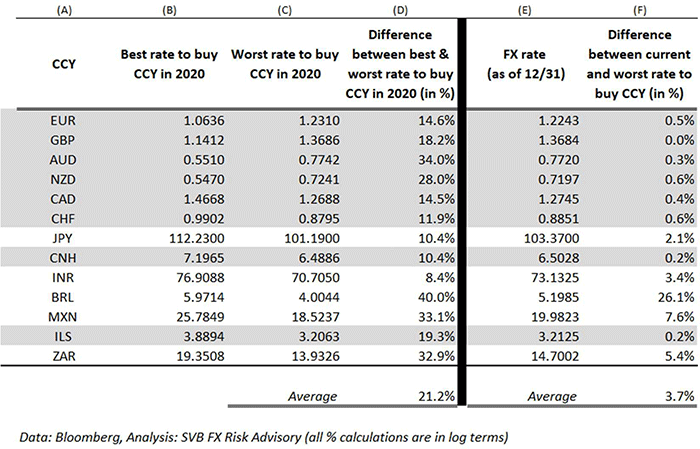 As you think about your currency needs for 2021 beyond, consider the following: 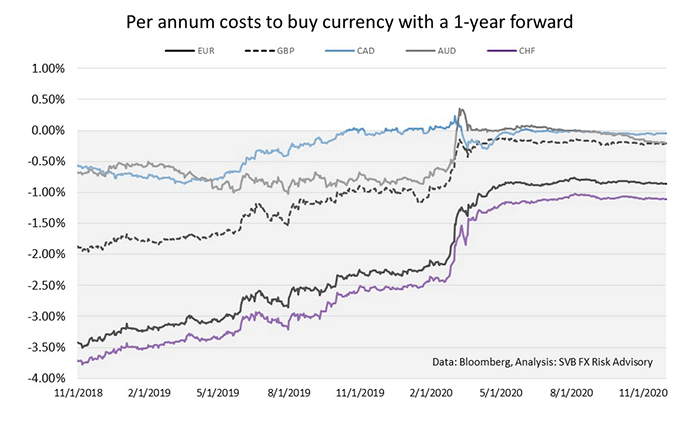 6 According to flows we see at Silicon Valley Bank, there are 3 net USD sellers for every net USD buyer.

7 For more on currency behaviors, read our white paper on the subject: https://www.svb.com/blogs/ivan-asensio/how-currency-movements-can-affect-your-global-business