Several themes dominated financial markets during the month of March, all of which supported a stronger US dollar: 1) accelerated US vaccinations; 2) rising long-term US interest rates; 3) exceptional US fiscal stimuli - the passage of the $1.9 trillion relief bill coupled with the proposed $2+ trillion infrastructure spending bill; 4) inflation’s return; and 5) a more optimistic outlook for the US economy than for other developed economies.

These themes could prevail through Q2. In contrast and in the short-term, European economies are likely to be restrained by less formidable fiscal spending programs, stalling vaccination rollouts, and a third Covid wave. Over the long-term however, Europe is expected to fully recover, returning demand for European assets and the euro. In addition, it appears likely that most of the world’s economies will recover, attracting global investments into local assets/currencies. Our long-term view of a lower US dollar remains.

Dollar index gained in March. The dollar’s outperformance in March (up 2.6%) was robust against the Japanese yen (+3.4%) and Swiss franc (+2.8%), as optimistic investors saw diminished need for safe haven currencies. In addition, the dollar strengthened against the euro for the third straight month – with its March gain the biggest since May of 2018.1

US yield curve steepened to unexpected highs. In March, short-term rates were held low by the Fed while the yield for the US Treasury 10-year bond jumped from 1.40% to 1.75%. According to Bloomberg investment flow data, there were significant net inflows into US Treasury bonds in March, presumably from yield-hungry investors.2

Federal Reserve Chair Jay Powell raised forecasts sharply for growth and inflation this year, but maintained a dovish stance, cautioning that any burst of inflationary pressures would be short-lived. The Fed remains committed to keeping interest rates at rock bottom levels until its average 2% inflation and employment goals are reached—expected sometime in 2024.3

Similarly, the Bank of England said it would “not tighten monetary policy” until there was clear evidence of recovery in the labor market and its 2% inflation target was reached.4

Meanwhile, the European Central Bank accelerated asset purchases (which it views as protective to the eurozone economy). The ECB is expected to keep its benchmark rates negative and on hold for the foreseeable future.5

Unwinding of US dollar ‘bearish’ bets. Bets against the USD, attributed to the elimination of market risks associated with the US election and distribution of Covid-19 vaccines, began building last November. By late February, short dollar positions (as a strategy) had reached their highest level in nearly three years. Then, in early March, traders unwound at least a portion of their short dollar bets when UST yields climbed faster and higher than originally predicted, making them more attractive to global bond investors. 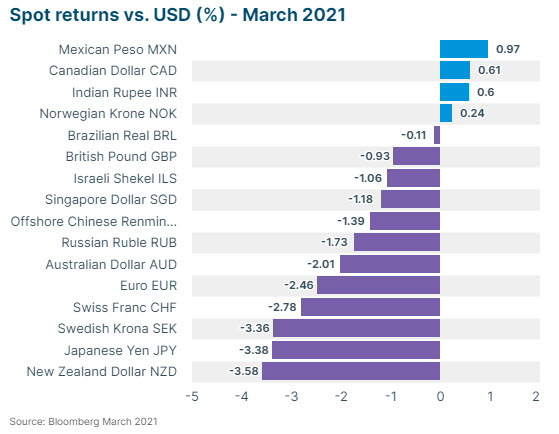 Investor angst over inflation. According to Bank of America’s latest survey of fund managers, inflation is now the single biggest threat to financial markets. This is the first-time inflation has topped the “fear table” for investors. The concern is that inflation will rise sharply due to aggressive monetary and fiscal policies and pent-up consumer demand.7 So far, inflation has not yet picked up meaningfully – February’s CPI was 1.7% YoY. The expectation of higher inflation has led to the worst quarter for long-term US government bonds in four decades.8

Divergent recovery rates. Analysts expect the US may return to its pre-pandemic growth rate next year, while it may take EU members several more years to recover. ECB President Christine Lagarde noted that there is a “time lag” between the US and European fiscal stimulus plans, stating “Our fiscal measures are not kicking in yet, and we need that.” 10 The Organization for Economic Cooperation and Development (OECD) recently forecast the US economy to expand 6.5% this year and 4.0% next year, exceeding forecasts for the EU of 3.9% and 3.8%, respectively.11 Meanwhile, the UK’s highly successful vaccination program has allowed the economy to reopen while the rest of Europe struggles.

Prospects for a strong recovery in world trade. After having fallen by 5.3% in 2020 the World Trade Organization (WTO) expects the volume of world merchandise trade to increase by 8% in 2021.12

‘Data tantrums.’ According to Gurpreet Gill, Fixed Income manager at Goldman Sachs, markets may experience “data tantrums” as investors struggle to interpret economic data releases in a post-pandemic era. The pandemic damaged global economies so severely in Q2 2020, that year-on-year data comparisons this quarter are seen to be virtually useless.13

Rising challenges with China. In March, US and China officials met for the first time since the Biden administration took office. President Biden said, “I see stiff competition with China,” citing everything from chips to national values, which he stressed in a two hour conversation with President Xi. Secretary of State Antony Blinkin added “The US relationship with China will be competitive where it should be, collaborative where it can be, adversarial where it must be.” 14

“Reflation trades” in H2. Since November, investors/speculators embraced the “reflation trade” narrative – buying assets likely to benefit from strong global economic growth, steepening yield curves and rising inflation. Foreign stocks have been big beneficiaries, especially in European and Asian emerging markets, increasing demand for their respective local currencies at the expense of the US dollar. In March, a partial unwinding of massive short-dollar/long foreign currency positions led to dollar strength. While this may continue in Q2, we predict the dollar to continue its secular downtrend in H2.