Effective vaccines coming soon: Three companies, Pfizer/BioNTech, Moderna, and AstraZeneca announced effective late stage trials for Covid-19 vaccine in November. The feat of creating an effective vaccine, let alone by three different companies in less than a year is unprecedented. Markets cheered the accomplishment with equity indices reaching new highs as the “WFH” rally pivoted to cyclical stocks and treasury yields nudged higher. The vaccine news reaffirms the market’s exuberance over the past several months - there is a light at the end of the pandemic tunnel - which may end with the dollar continuing its decline. 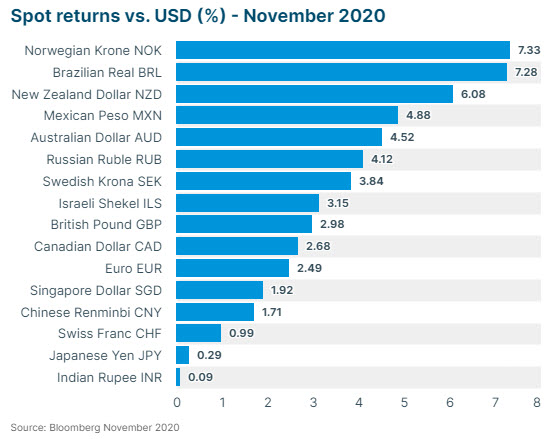 Senate control. On January 5 Georgians will go to the polls to vote on two Senate run-off elections. Should Democrats take both seats, Vice President-Elect Harris could break ties in future legislation enabling democratic control of the senate, passing more aggressive policies such as higher taxes and spending. A drastic re-pricing in markets would follow Democrats sweeping Georgia, sending the dollar higher as equities and treasuries sell off.

Post-Brexit Britain. The final deadline to reach a trade deal between the UK & EU is December 31 and it looks increasingly likely to come down to the wire. UK Prime Minister Boris Johnson and European Commission President Ursula von der Leyen will meet in Brussels to negotiate key remaining differences including fishing rights and fair-trade competition. The two leaders have until December 11 to craft a deal to be presented at the EU Summit on December 11 for all 27 EU members to sign off. Expect a binary outcome of these discussions with GBP/USD plummeting to levels seen this spring (1.25), or positive negotiations could shoot cable past it’s 1.35 resistance on its way towards 1.40.

Fiscal and monetary stimulus. As the pandemic continues to surge out of control, depressed job numbers illustrate the stress the disease is having on the US economy and citizens. What’s more, additional government restrictions aimed at curtailing the virus are worsening the economic situation. Markets and individuals alike are pleading with congress to pass additional stimulus measures. Indications are a stimulus package may pass before President-Elect Biden’s inauguration. Stimulus news is expected to further weaken the USD.

The end of a pandemic? Continued positive news of several effective vaccines brings hope that the COVID-19 pandemic is near over. Key questions remain however: Once vaccines are delivered to everyone, what will ‘normal’ mean? The pandemic has already brought societal shifts which have profoundly impacted the course of economies and balances of power globally. Which of these shifts will remain, and which will fade away in the post-COVID world? The rapid development of successful vaccines has rallied markets, with investors returning to risk-on postures and leaving safe havens—for now.

Blurred Fed and Treasury lines? Former Fed Chair Janet Yellen is President-Elect Biden’s nominee for US Treasury Secretary. Yellen, a labor economist by training, has been a vocal proponent of additional US fiscal stimulus as a remedy to the economic pain wrought by the pandemic. If approved, expect US Treasury Secretary Yellen to enact near-term policies which heavily favor expanded deficit spending. Dollar outlook is expected to be bearish.

Inflation returns? The sizable fiscal and monetary stimuli earlier this year have kept asset prices and portions of the economy afloat, however another key question remains: once virus fear subsides and economic activity moves towards pre-pandemic levels, will inflation emerge? Reintroduction of aggregate demand in the economy and a Fed with policies which let prices run above targets may trigger inflation. An inflated dollar coupled with persistent low interest rates may force real US yields further into negative territory, lessoning investors’ appetite for USD denominated debt.

After a tumultuous October, investors embrace US election outcome.

Scott Petruska
Read more
You are now leaving Silicon Valley Bank (SVB)
You will be directed to a different website or mobile app that has its own terms of use, visitor agreement, security and privacy policies. SVB is not responsible for (and does not provide) any products, services or content at the third party site or app, except for products and services that carry the SVB name.
I understand, let's proceed Stay on SVB.com