Wall Street 2021 FX forecasts were way off. At year-end 2020, Wall Street was overwhelmingly bearish on the US dollar. According to Bloomberg, the median EUR/USD forecast at the end of 2020 was 1.24 with the lowest at 1.14 and the forecast for the US Dollar index (DXY) at year-end 2020 was 88.4. As of December 3, 2021, the EUR/USD traded at 1.13 and the DXY traded at 98, both over 9% lower than forecasted. These data highlight the risks firms face when guiding business decisions using forecasts. Firms may better base decisions on achievable market rates and key operating metrics. 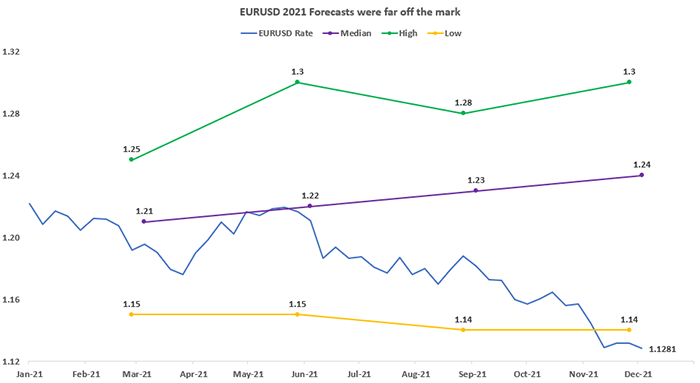 Powell was renominated as Fed Chair. Jay Powell will see a second term at the helm of the Fed. Powell’s tenure continues amid lasting impacts from the pandemic on the economy, a smaller labor force participation rate, and the highest US inflation in three decades. Since the announcement of Powell taking over at the Fed in February 2018, the US dollar index (DXY) has risen 6.7%. 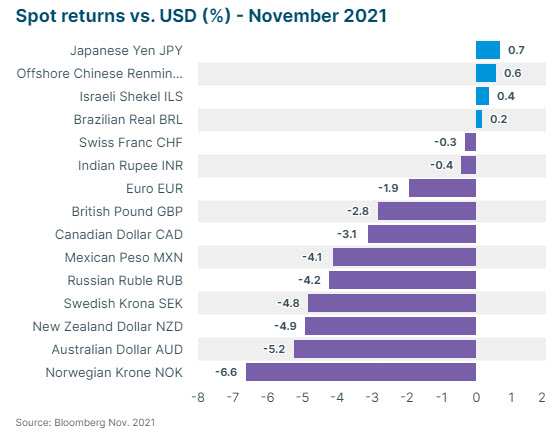 Yen and Swiss franc joined USD as safe havens. During the risk-off episode that followed the announcement of the Omicron variant on November 25, the Swiss franc, Japanese yen and US dollar outperformed as safe haven currencies. This hasn’t been the case throughout other risk-off periods in 2021 however, as the yen and franc haven’t normally outperformed as safe havens during periods of risk-off investor sentiment. Despite widespread rhetoric suggesting the US dollar was in decline as the leading reserve currency, the US dollar remains the principal haven in times of uncertainty.

Fed indicates tapering will accelerate. Following news of October’s inflation CPI hitting a three-decade high, and of clear progress being made in the labor market (with unemployment at 4.2%), the Fed has changed its tune over the last few weeks regarding its tapering schedule. The original schedule would have reduced the $120bn per month in treasury and mortgage-backed securities purchases by $15bn per month, ending the program in July 2022. Now several Fed governors have supported the idea of tapering concluding in late Q1 or early Q2 2022, which would require the tapering pace to double. Early termination of tapering gives the Fed more flexibility to raise interest rates sooner in 2022 if inflation continues to run hot. The Fed’s hawkish tilt has brought the greenback to July 2020 highs. 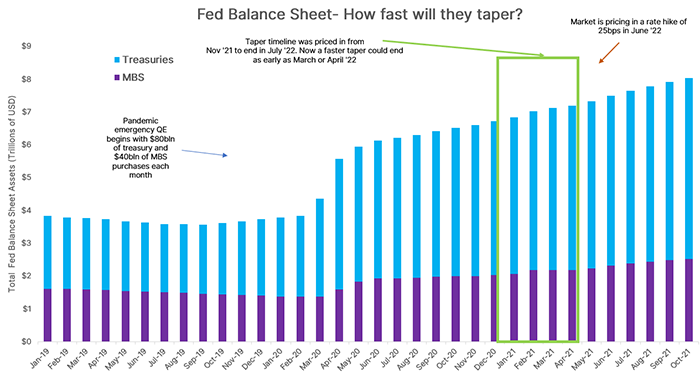 Omicron. The announcement of the Omicron COVID variant shook markets on the Friday after Thanksgiving, spurring a period of risk-off investor sentiment. The variant isn’t yet fully understood, but early reports show higher transmission rates with milder symptoms and fewer hospitalizations when compared to earlier strains. A less lethal strain taking over as the dominant variant could ultimately bring the end of the pandemic. As the Omicron variant spreads and governments return to more restrictive measures, look for the US dollar to gain as the primary safe haven.

Euro struggles to find its place. The euro saw a tremendous confidence boost by markets after the European Union’s fiscal integration of the bloc issuing pandemic relief bonds in late 2020. The single currency rallied to multi-year highs against the dollar and was considered by some as a new contender for the premier safe haven and global reserve currency. Yet a year later, the euro has completely reversed its 2020 gains and now trades at pre-pandemic levels. With no sign of highly accommodative monetary policy ending, the ECB grapples with high inflation across the Eurozone. Rates markets don’t expect short term interest rates to change from -50bps in 2022. If the ECB keeps rates at -50bps while other central banks hike rates to control inflation, the euro will continue to be a favorable ‘funding currency’ for investors (a currency with low interest rates, which investors borrow in to buy assets of a higher yielding currency). In this case the euro will remain soft in the mid-term.

China’s quandary: China’s zero-tolerance COVID policy has been one of the longest lasting in the world. It was viewed a success by some as China’s economy roared back from the lockdowns of early 2020. Yet Omicron threatens to shatter this approach as its high transmission rate and ability to break through vaccines may be unstoppable. Renewed lockdowns and more extreme restrictions may slow the Chinese economy and depress commodity prices and global growth. Q3 ’21 saw GDP growth of 4.9%, the slowest growth in three decades (outside of 2020). Slower growth could prompt the Peoples Bank of China (PBOC) to loosen policy as it also grapples with a troubled real estate sector. The PBOC has warned onshore bank speculators against bidding up the value of the CNY –one of the best performers in 2021, up 2.88% against the greenback as it may deter competitiveness of Chinese goods in foreign markets.

Collapse of the lira. Turkey is in the midst of an historic currency collapse. So far in 2021, the lira has lost 45% of its value against the US dollar. Foreign investors have lost confidence in Turkey’s central bank and finance ministers, and with a history of depreciation under President Erdogan, a weakening currency is nothing new for Turkey. Today, with its currency in free-fall, Turkey is experiencing 21% inflation. This is while Erdogan sacked his finance minister and pressured the central bank to cut rates by 400 basis points to 15%. Turkey’s central bank has made several FX market interventions to support the falling lira, but they will be short lived, especially while interest rates are getting slashed. 2022 could usher in a year of currency alternatives in Turkey as the country may see dollarization (the adoption of another currency like the euro or US dollar as legal tender) unless interest rates are hiked to painfully high levels.

If you’d like to discuss your specific situation or for more analyses on FX markets or information regarding SVB's FX services, contact your SVB FX Advisor or the SVB FX Advisory Team at fxadvisors@svb.com.

Written by
Will Joyce
William Joyce is a Vice President in Foreign Exchange Sales with Silicon Valley Bank and helps clients manage the opportunities and risks associated with doing business internationally.