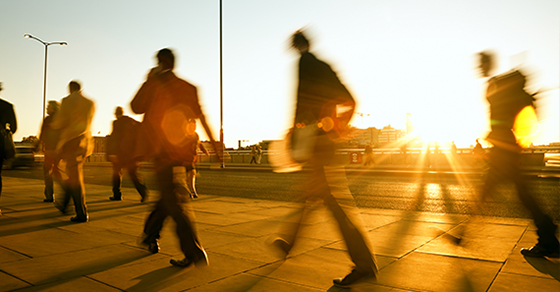 After spending most of the first quarter languishing in FX purgatory, the U.S. dollar pushed higher against most currencies throughout April. The majority of G10 counterparties are now underperforming against the greenback year-to-date — and most of the periphery currencies are down as well. The data continues to be supportive, but the focus is shifting to other factors.

Let’s take a look at recent events that may be changing the conversation.

The dollar holds steady. The Federal Reserve kept its benchmark rate unchanged at 1.50 – 1.75 percent, citing balanced growth and inflation moving toward target. A recent statement by the Fed looks to set up a potential hike in either June or August.1

The markets quickly sold off the dollar after the statement was released. Given the recent rally and the lack of any new directives, the move was not surprising and may prove to be temporary.

The pound — not so sterling anymore.

The GBP has taken a beating in recent weeks as disappointing economic data and some political risks are beginning to weigh down on the currency. The expectation for a May rate hike has greatly dissipated as comments from the Bank of England seem to have turned more dovish.2

Growth and inflation data have been underwhelming, which has reduced the probability of a hike from 90 percent down to 20 percent. Cautious remarks by BOE Governor Mark Carney certainly didn’t help.

It’s the economy, eh? The Canadian economy is expected to grow at 1.80 percent in 1Q and about 3.00 percent for 2018. Stable labor and a jump in oil prices are giving Canada a boost for another year of decent growth.3

The volatility of the CAD has been partly due to NAFTA headlines. Until trade agreements are wrapped up, it’s probable that the currency will oscillate within recent trends.

Euro — stuck in the zone. Eurozone GDP slowed to 0.40 percent in the first quarter. Colder weather and a labor strike in Germany were to blame. However, the strong start of the EUR in the first quarter may also have hampered manufacturing and exports.4

All of these factors will affect future decisions on quantitative easing and European Central Bank policies.

PBOC puts the brakes on. The trade war jabs and threats of more tariffs between the U.S. and China may not be quite over yet. The People’s Bank of China weakened the yuan more than expected ahead of U.S. Treasury Secretary Mnuchin’s upcoming visit to negotiate trade.5

It keeps on rolling. U.S. expansion, approaching its ninth year, now ranks the second-longest run ever. The concern is whether the balance between higher rates and inflation can be maintained — without inflation overheating.

Show me the money. The overall consensus for corporate earnings in the first quarter was fairly positive. Both banks and tech sectors posted solid numbers. Unfortunately, equity markets continue to whipsaw as investors assess valuations that are near their peaks.6

Yields are popping. The 10-year U.S. Treasury yield broke through 3.00 percent for the first time since 2014. The curve continues to flatten as short-term rates have inched higher — while long bonds remain tethered at just over 3.00 percent.7

The jump in yields has been one of the factors supporting the recent USD rally. Higher rates are typically bullish for the respective currency.

Sanctions and Syria. Geopolitical tensions in the Middle East sparked a sell-off for the ruble after President Trump responded with force to a chemical weapons attack in Syria. The conflict soured U.S. relations with Russia — leading to sanctions placed on commodities and metals. The ruble spiraled lower and is down 9.40 percent year-to-date.

These are ‘risk-off’ events — where investors tend to gravitate towards safer assets when there are negative exogenous incidents. This tends to be a positive for the U.S. dollar — as it springs back to life. 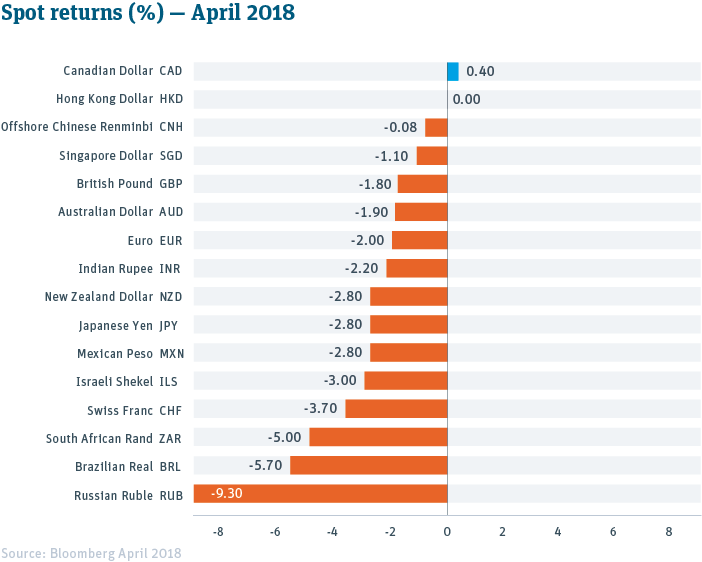