Financial markets largely ignored Washington drama. Following several dramatic political events including a blue sweep by Democrats winning control of both houses of congress, the storming of the US Capital building and subsequent impeachment proceedings, FX markets, like equity markets, seemed to look beyond the headlines. In January the US dollar gained relative to most currencies. (FX market watchers attribute dollar strength to uncertainty surrounding the slow Covid-19 vaccine rollout).

Central banks insisted monetary policy will remain in place for the long-term. The Federal Reserve and European Central Bank voiced support for their respective recovery plans, indicating that low or even negative interest rates will remain in place through 2021 or until they are convinced their economies are proceeding on a solid growth trajectory. Also, bond buying (quantitative easing) will continue in the US, Europe, the UK and other counties as a buffer against deflation. With most developed countries holding rates near zero, the comparative strength of the US dollar seems to reside primarily in its value as a safe haven. 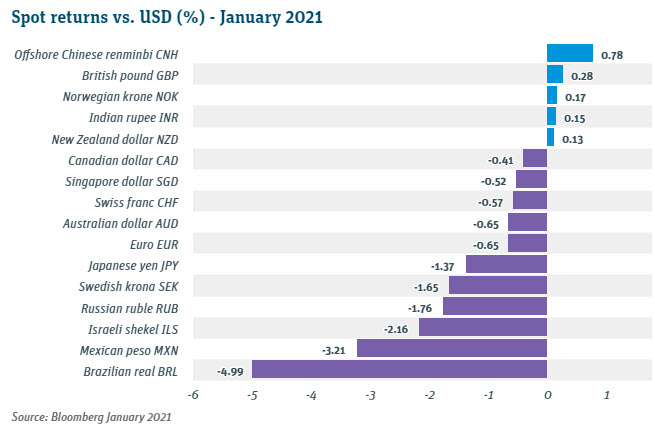 Vaccine roll-out expected to ramp-up significantly. More vaccines are expected to gain approval including Johnson & Johnson’s which requires less onerous transportation logistics and a single inoculation. Financial markets anticipate mass inoculations to begin in earnest but remain guarded as the “last-mile” of getting shots into arms has proven ill planned and underfunded. The US dollar rebounded in January due to uncertainty around the pace of inoculations and economic recovery. As uncertainty lessens the USD will likely lose value.

Social media drives some asset values on surging retail volume. Equity markets in the US lost 2% on the last day of trading in January, driven in part by social media which spurred a selloff by investors concerned about speculators who were short some hyper-volatile stocks. The fear is speculators will be required to sell other investments to raise funds to cover huge losses. It seems unlikely that frenzied, social media-fed trading could impact the $6 trillion a day FX market, however individual currency pairs may see interest peak as speculators move from single stocks to commodities to FX. In September 1990 the UK was forced to devalue the pound when speculators entered huge short positions eventually resulting in a 25% devaluation over three months.

Strife over stimuli keeps financial markets guessing. Even though Democrats and Republicans have proposed different stimulus packages, equity markets view the departure from caustic political polarization to bipartisan negotiation positively—FX markets are less assured. The $1.9T package proposed by Democrats is sufficiently large enough to effect Treasury rates and demand for dollars (and the quicker return of inflation). Typically, the dollar sells off as equity markets rise. Today the US dollar shows signs of decoupling from the US equity market; speculators may unwind some bearish bets giving the dollar a temporary lift contemporaneous with lifts in equity markets.

US-China relations will most likely reset over the next few months. China was angered when a Taiwanese diplomat attended President Biden’s inauguration, so they flew military jets into Taiwan airspace on several occasions following the event. Biden, who objected to the Chinese aggression, has appointed a number of China hawks to his cabinet and government positions. Trump’s approach to China was considered stern but at odds with his tariff strategy, resulting in lost economic activity in the US. Biden is just as concerned about China, a threat that has become a bipartisan rallying point. As Biden seeks to isolate China economically with the help of traditional US allies, the US dollar could see some additional support if Sino-America relations deteriorate suddenly. In the absence of more hostile relations, look for the renminbi to strengthen.

State of the Union address may have geopolitical ramifications. On February 23, Biden will deliver the State of the Union. FX markets anticipate the Biden administration to announce plans to spend extensively to repair a Covid-19 ravaged economy, raise taxes and move away from fossil fuels toward renewable energy sources. Geopolitical adversaries often time their actions around key political events including elections and speeches like the State of the Union. North Korea in particular, has been preparing for a large missile test. Mention of North Korea in Biden’s State of the Union could incite the nation to implement a new test. In such an event, a stronger dollar and weaker Asian currencies would result.

Scott Petruska
Read more
You are now leaving Silicon Valley Bank (SVB)
You will be directed to a different website or mobile app that has its own terms of use, visitor agreement, security and privacy policies. SVB is not responsible for (and does not provide) any products, services or content at the third party site or app, except for products and services that carry the SVB name.
I understand, let's proceed Stay on SVB.com