The dollar peaked in March as coronavirus fears gripped financial markets and economies began to shut down around the world. As spring turned to summer, governments piled on fiscal stimuli and central banks poured liquidity into financial markets, causing the US dollar to give back all gains since March, finally trading down to summer 2018 levels. September saw uncertainty return as Covid-19 cases increased, additional government stimulus from the US was delayed, and concerns arose that US election results could be delayed and/or contested.

USD safe-haven status tested. The Federal Reserve led financial markets to expect the current 0-0.25% Fed Funds rate will remain through 2023. As of this writing, central banks world-wide have generally used up their primary tools for influencing economic growth and inflation—including the Fed. With the US dollar now yielding zero, investors will likely seek higher yielding currencies, leaving the dollar’s safe-haven status as the last remaining barrier to a  weakening  dollar.

US/China relations deteriorated further. The US ban on Chinese control of TikTok and a large weapons deal with Taiwan have further strained relations between the countries. Although both Trump and Biden promise to be tough on China, investors anticipate a Biden presidency to take a somewhat more coordinated approach. Meanwhile, the Chinese are holding fire awaiting the outcome of the election. The Chinese renminbi is likely to strengthen versus the US dollar and other currencies due to its more stable economy, with future growth increasingly focused on domestic consumption. Higher Chinese interest rates are increasing the desirability of Chinese assets.

US equity options overtook cash market value. Indications are investors are focusing on a limited number of investment strategies. FOMO (fear of missing out) and TINA (there is no alternative) have driven equities for years, and now the volume of call options is setting records as both institutional and individual investors pour into equity options. The concentration of investment strategies traditionally ends in sudden financial market stress, benefiting the dollar even if that stress originates from within the US. 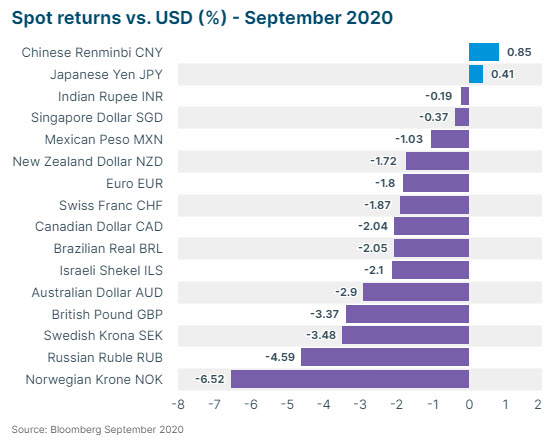 Brexit charges towards endgame. Talks to replace the temporary trade deal between the UK and the EU set to expire by year-end have been repeatedly stymied with sticking points, further compressing the time left for a new arrangement to be resolved. If no trade agreement is signed in the next month, the British pound will see a sharp sell-off. It is anticipated that after this period of disruption, and eventual signing of new trade agreements, the British economy will stabilize and grow, leading to a stronger pound.

Resurgent Covid-19 drives investors to safe-havens. Even as Covid-19 case numbers spike in some countries, and medical care improves as hospitals better understand the illness, an effective vaccine is likely to be several months off. Given this uncertainty, investors have been taking a more measured response. As a rule, the worse the Covid-19 case numbers, the stronger the dollar, as investors seek safe-haven currencies. The dollar’s safe haven status diminishes as the likelihood of an effective vaccine nears.


"With the US dollar now yielding zero, investors will likely seek higher yielding currencies, leaving the dollar’s safe haven status as the last remaining barrier to a weakening dollar."

US election likely to increase near-term volatility. With the US election less than a month away, investors are planning strategies in the event of a new president and potential for a contested outcome. (SVB Chief Currency Strategist Scott Petruska analyzes the potential outcomes of the election and the impact on FX rates in this recent report). The possibility of significant market volatility following the election is only now being priced into the foreign exchange and equity markets. What’s more, volatility amplitudes could widen with the contemporaneous publication of phase-3 clinical trial results pointing to a Covid-19 vaccine, and the resolution (or not) of a UK/EU agreement.  Safe-haven status will continue to help support the dollar and other safe-haven currencies through the end of the year; investors may expect the euro and Chinese renminbi to strengthen in 2021.

Additional US government stimulus may be forthcoming. An additional stimulus package currently being negotiated in Washington, will be required to support the US economy until a vaccine is distributed and consumer spending returns to “normal” levels. As news of an agreement nears, financial markets are likely to assume a more risk-on posture, with equities rallying and the dollar selling off. Conversely, as time passes and agreement is delayed, the economy will continue to trend down. With no near-term agreement in sight, investors may observe a sharp sell-off in equities and a strong rally in the dollar. Companies with non-dollar expenses should look to lock-in a spike in the value of the dollar between now and year-end.