A strong U.S. dollar remains the ongoing theme as we settle into the third quarter of 2018. The greenback is trading near its year-to-date high against most currencies, including those of emerging markets. The economic trends are supportive, and the Fed remains steady and resolute. However, politics and trade headlines continue to put investors and traders on guard.

Trade talks stall. The U.S. and China are trying to restart talks aimed at avoiding an intense trade war. Negotiations have been at a standstill for a few weeks as both parties lobbed threats and accusations of unfair play. Additional tariffs and the ongoing tension will keep markets in a cautious position.

The renminbi has taken a dive since April, and trade headlines have exacerbated the currency decline. The CNY is down almost 4.5 percent for the year, after being up 3.0 percent in the first quarter.

Compression continues in Treasury yields. The spread between 2-year and 10-year Treasury notes continues to narrow with each successive rate hike. The short end of the curve has steadily moved higher each quarter, while the longer maturities have remained relatively stable. This has stirred more conversations about an inverted yield curve and the potential of a pending recession.

The Federal Reserve has more or less avoided the topic. The central bank can move short-end rates much more effectively than longer-end rates. But so far, the debate has been more academic than market practice.

FOMC holds for now. The Federal Open Market Committee kept rates unchanged on August 1, but their statement leaves a “strong” possibility for a rate hike in September. It was a unanimous vote supported by comments about a solid labor market, rising inflation, and robust economic growth.

BOE makes a move. The Bank of England raised its benchmark rate for only the second time in nearly a decade to 0.75 percent. Most market participants expect this to be the only move for the year, and the pound continues to trend lower on prevailing dovish sentiment.

The pound is down 3.5 percent for the year despite decent economic metrics. Much of the downward pressure stems from the ongoing Brexit debates. Recent resignations by key cabinet members are creating greater uncertainties about how well negotiations with the European Union will go.

BOJ keeps rates low. The Bank of Japan pledged to keep interest rates low “for an extended period” and dispelled any speculation about an early exit or rate hike. The central bank noted that it will continue to intercede to keep 10-year yields low. Markets reacted quickly and pushed the Japanese 10-year down to 0.05 percent from 0.12 percent before the announcement.

The economy goes full throttle. The U.S. economy grew at 4.1 percent in the second quarter, the fastest pace since 2014. The expansion was fueled by consumer and business demand, export gains and a boost from tax cuts. Household consumption rebounded to 4.0 percent after a lackluster 0.50 percent the previous quarter.

The data certainly allows the FOMC to keep raising rates as the economy continues to absorb the gradual hikes without losing pace. That’s a bullish sign for the U.S. dollar.

Facebook un-liked! Facebook shares tumbled 20 percent after its earnings release stating that revenue growth would decline in the third and fourth quarter. The drop shaved off $120 billion in market cap. The social media giant has been plagued by Europe’s strict data laws and its involvement in the 2016 U.S. presidential election.

Up, up and away. U.S. corporate earnings for the first half of 2018 have been solid overall despite some big misses and constant volatility. However, investors remain optimistic, especially in the tech sector. The Nasdaq is now up 13.0 percent year-to-date, with the S&P at 5.8 percent.

Rely on SVB for FX capabilities that can help your company minimize foreign currency risk and maximize returns. Our advisors and traders utilize the latest currency hedging tools to help you buy, sell and operate effectively in an increasingly volatile global marketplace. Talk to us for ideas and strategies to gain a competitive advantage while managing global currency risk. 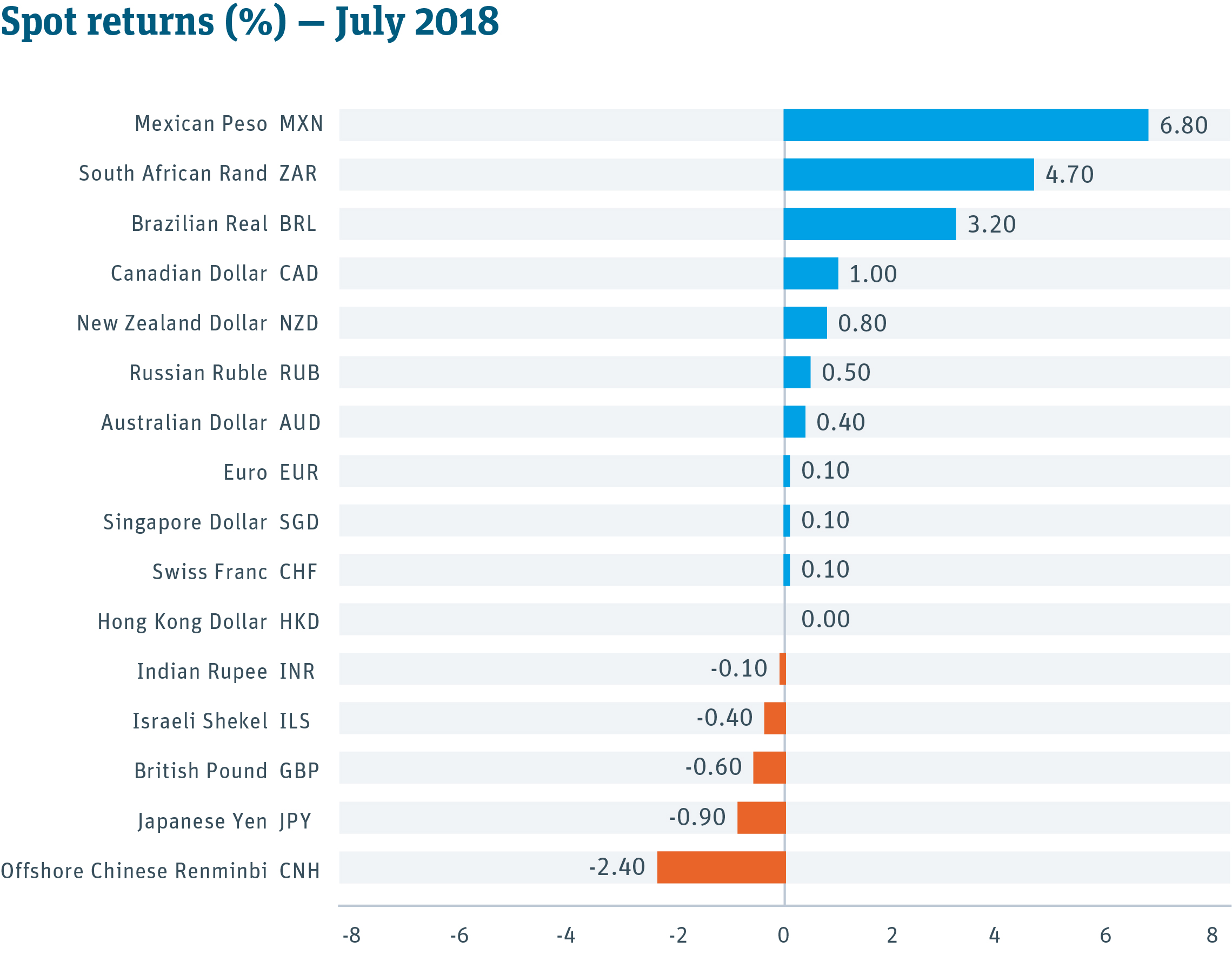 Trang earned his Masters in Business Administration at the University of California, Irvine and a bachelor in economics at the University of California, San Diego. He holds the Chartered Financial Analyst (CFA) designation and FINRA securities licenses 7 and 66.
You are now leaving Silicon Valley Bank (SVB)
You will be directed to a different website or mobile app that has its own terms of use, visitor agreement, security and privacy policies. SVB is not responsible for (and does not provide) any products, services or content at the third party site or app, except for products and services that carry the SVB name.
I understand, let's proceed Stay on SVB.com