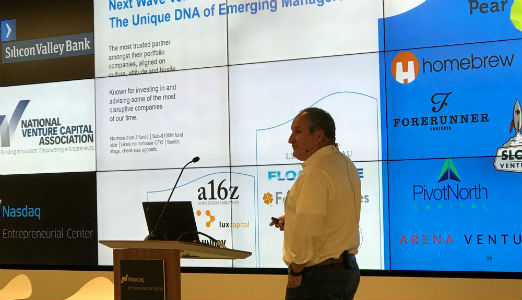 Prior to joining SVB in 2012, I was a founding partner of Selby Ventures where I spent 14 years working with really talented entrepreneurs and investing in some amazing companies like Pandora, Coremetrics, and BigFix. The venture market was quite different in 1998: There were way fewer funds and the term “micro VC” didn’t exist. In some ways it was much easier to raise a fund back then — with fewer funds, differentiation was less of an issue and there was far less venture capital in the system. There was also a big hole in the market between larger, established funds and angel investors who were doing the bulk of the seed funding.

Today I work with emerging VC fund managers, and am often asked about my biggest lessons learned and what I’d do differently the next time around. Leading up to an NVCA and Silicon Valley Bank Seed Manager Workshop, that we hosted with Jeff Clavier, SoftTech VC founder and NVCA board director, and Michael Kim of Cendana Capital, I recapped a few of those lessons learned during my time as a seed investor:

1) Develop your own framework for investing and when you have conviction, don’t worry about what other investors think. When you’re starting out as a VC with no brand or track record, it’s natural to want to co-invest and seek validation from established, brand-name firms. While it’s important to make sure there’s enough capital in a seed round to get to the next key milestones, don’t focus on what others think. And if you believe deep down in a team and company, be persuasive when approaching other investors to fill out a round (and don’t worry about the brands).

2) Be a contrarian. It’s easy to fall into the “follow the herd” mentality as a VC. Certain sectors get hot, a number of interesting companies get formed, lots of venture capital flows in and before you know it, you have a dozen companies funded with each doing almost the exact same thing. You can’t predict the future, but back founders who have a vision for what the future might look like and don’t be afraid of being wrong.

3) Your most important work with the founder/CEO happens outside of the board meeting. If you have a board and think the board meeting is where you’ll do your real work with the company, you’re wrong. Too much time at board meetings is spent on high-level strategic and administrative work and not enough time helping the founder with his or her most important short- and medium-term issues. I can’t also tell you how much time was wasted in board meetings listening to young, arrogant VCs wax eloquently to prove to the rest of the board (and more senior partners in their firms) how smart they were (so annoying).

4) When you remove the founder/CEO early in a company’s life, your chances of building a successful company go way down. When you’re investing early, you’re betting mainly on the team, as there’s little data, traction, or market validation. Sometimes, though, you get enamored with a market and realize you bet on the wrong team. However, for some startups their culture and morale are tied to the founders. Once the founders are gone, it’s often hard to recover. Rather than replace the founder and put in more money, in my experience it’s better to cut your losses and get the company to a soft landing.

5) Seek founders who see the world differently from you. One of my mistakes as an investor was to gravitate to founders who approached life and saw the world like I did. While I consider myself fairly entrepreneurial, I definitely don’t have founder DNA or that risk profile. While having a moral compass similar to mine was critical, if I had to do it again, I’d seek much different, more diverse and even crazier founders to back.

6) Investing out of a $10–$30 million fund is much different than investing out of a $75 million-plus fund. Our first fund at Selby was $30 million, and our second fund was $105 million. We thought by having a larger fund we’d simply follow the model from Fund I and write bigger initial checks and have more reserves for our winners. That was partly true, but leading and controlling rounds with larger checks creates a different dynamic and responsibility with the team and co-investors, compared to chipping in checks of $100,000–$250,000 to top off a round. As checks get bigger, elbows get sharper, and future participation and signaling (as well as forecasting reserves) become more important. I talk with GPs every day who have that similar mindset in growing their firms but who haven’t really thought through all the dynamics of this growth.

7) Invest through good cycles and bad. Shortly after closing our second fund in 2000, the internet bubble burst, the tech/VC market imploded and the economy went into a free fall. Gloom and doom was the prevailing mood and companies were failing every day. Like many firms at the time, we stopped investing in new companies for a period of time and slowed our investment pace way down. As many have said before me, some of the best companies are formed in the worst of times, something we later experienced with Pandora, which turned out to be our biggest fund returner. So even though you’re fighting your natural instincts to withdraw and slow down when you think the world is going to end, continue to back great entrepreneurs and you just might be exponentially rewarded.
8) Be honest with yourself and make sure you have relevance and a differentiated strategy. As I mentioned earlier, there were very few seed funds in Silicon Valley when we started Selby, and our differentiation and reason for existing was the gap in the seed market. However, after raising and investing three funds, the market had changed dramatically, and the micro VC revolution was well under way. In contemplating our next fund we asked ourselves some basic but tough questions. Is there still a good reason for us to exist? Do we have a differentiated strategy? What’s our real competitive advantage? After days spent in front of a whiteboard that failed to yield convincing answers, we decided to wind down and not raise Fund IV. In every meeting I have with a new manager, I pose similar questions to make sure they’re raising a fund for the right reasons and are truly focused on building a firm vs. just a fund.
I’ll have more lessons to share in a future post, but I welcome questions from emerging managers, plus feedback, comments and additional advice for startup VCs.

SVB partners with LatinxVC to double the number of Latinx VCs

Jim Marshall
Head of Emerging Manager Practice
SVB
about.me/marshalljim
You are now leaving Silicon Valley Bank (SVB)
You will be directed to a different website or mobile app that has its own terms of use, visitor agreement, security and privacy policies. SVB is not responsible for (and does not provide) any products, services or content at the third party site or app, except for products and services that carry the SVB name.
I understand, let's proceed Stay on SVB.com