After record levels of investment in 2015, UK startups are retooling strategies for a shifting economic environment, according to Silicon Valley Bank’s annual outlook survey of technology and life science executives. Startups are saying no to a British exit from the EU (Brexit) and are planning to hire—but they expect that finding the right talent will continue to be difficult. An increasing number of businesses will pursue venture capital funding in 2016. As they plan their growth strategies, executives are being cautious. International market volatility and a tough start to the year have everyone keeping a close eye on what’s next. Read Letter from SVB’s CEO

Fifty-eight percent say business conditions will be better than 2015. That said, it represents a 21 percentage point drop over the last two years. Unbridled optimism has been replaced with rational restraint. “Startups focusing on solving real problems will succeed regardless of wider market perceptions,” a London medical devices executive said. 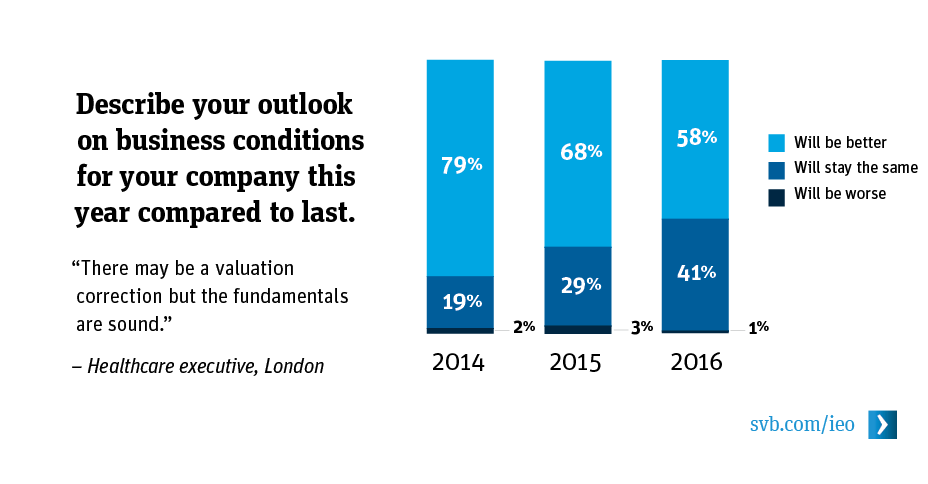 UK fintech businesses think Europe holds the key to expansion, which could explain the lack of support for a Brexit. One fintech executive warned that “geopolitics can overshadow business matters in Europe.” Six percent of executives said the impact would be positive. 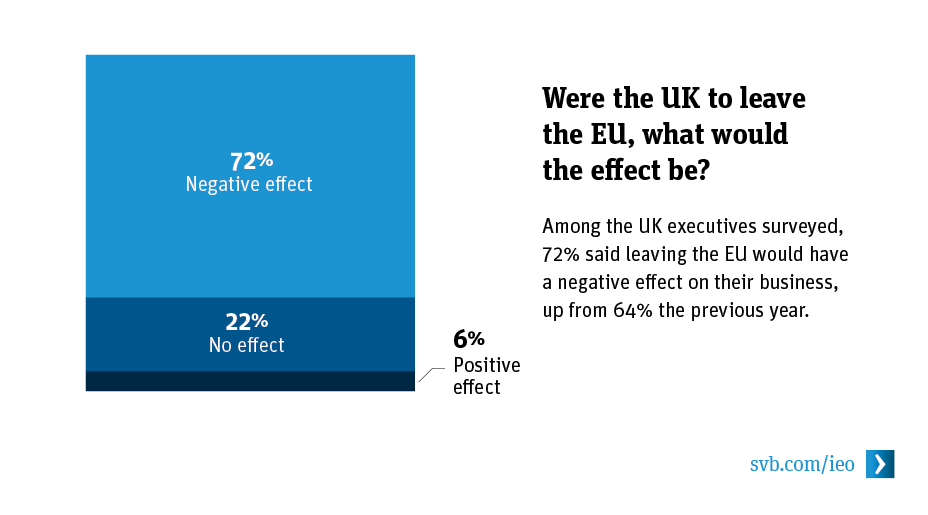 Raising capital continues to be challenging

Survey respondents said they plan to seek venture capital over other funding sources. Forty percent of executives expected venture capital to be their next source of funding, with angel investment and private equity a distant second. We expect that venture fundraising will become more challenging in 2016 but that VC investment activity will remain healthy.

More startups plan to be acquired than to go public

Acquisition eclipsed IPOs as the preferred exit strategy of entrepreneurs. Of the UK executives surveyed, 59 percent said their long-term goal is to be acquired, compared with just 17 percent who seek an IPO. 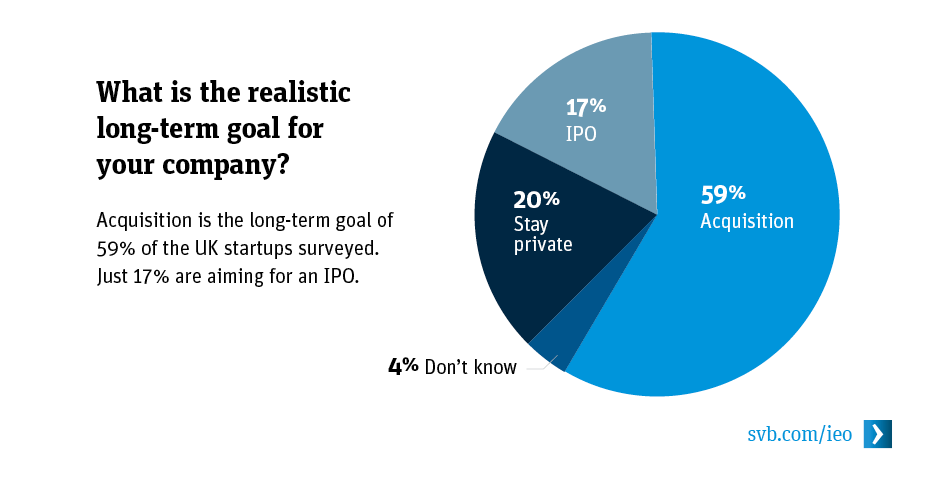 A majority of startups said they expected the number of acquisitions to grow or stay the same. Many tech IPOs faltered in 2015, making M&A a more viable exit option. Also, reduced valuations make acquisitions more attractive for top acquirers that have plenty of cash on hand to make significant purchases.

Ninety-five percent of executives said it’s challenging to find people with the skills necessary to help grow their businesses—up 6 percentage points since 2013. After years of increasing difficulty finding the right talent, it’s possible that the talent crunch has reached its peak and the very tight labor market may loosen. Even so, finding employees with the right skills will remain difficult in an overall environment of low unemployment rates. 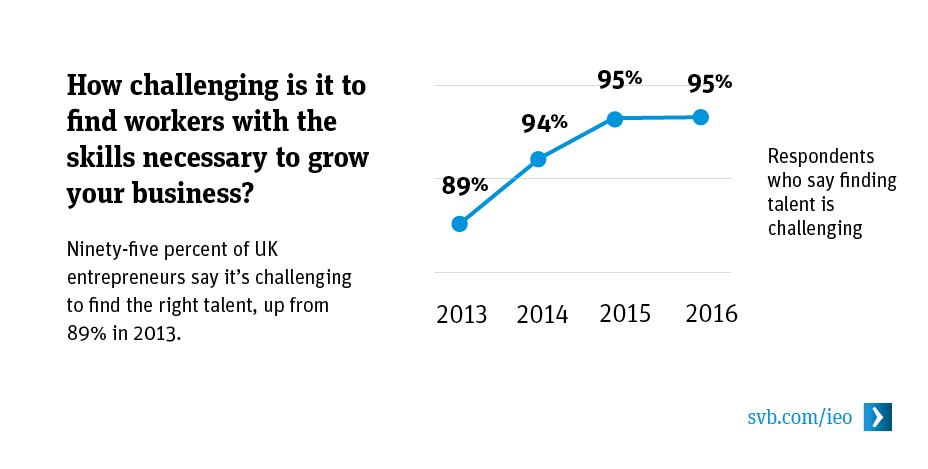 Of the leaders surveyed, 26 percent said recruiting is their biggest challenge. Half of the respondents said they’re looking for sales skills, while engineering and technical skills, product development, and marketing skills are also critical needs in 2016. The lack of skilled workers creates measurable business impacts, such as inhibiting product development, making it harder to scale operations and inhibiting revenue growth. 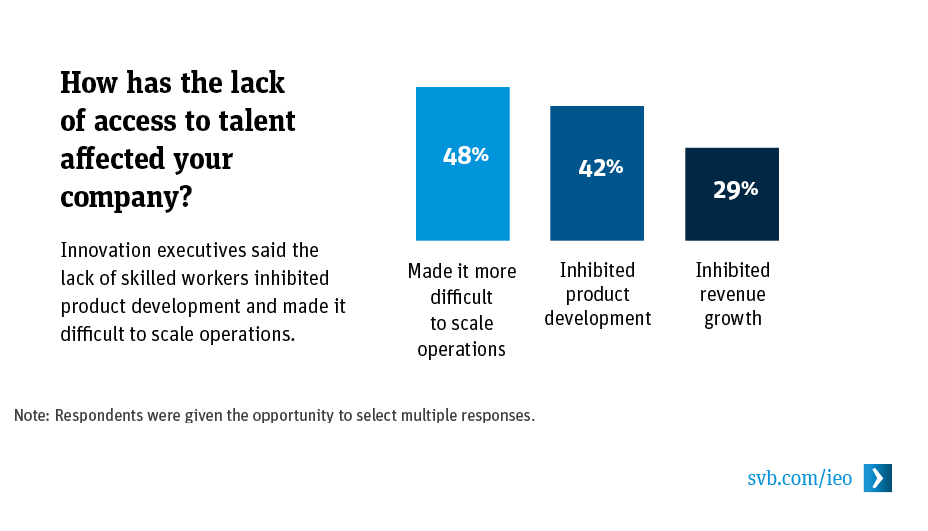 It’s well documented that women are underrepresented in leadership positions: 61 percent of UK startups have no women on their boards, and nearly half (47 percent) lack women in executive positions. Just 15 percent say they have programmes in place to increase the number of women in leadership roles. Creating more diversity in the top ranks of all companies is an imperative, and the dialogue on how to make it happen needs to continue. 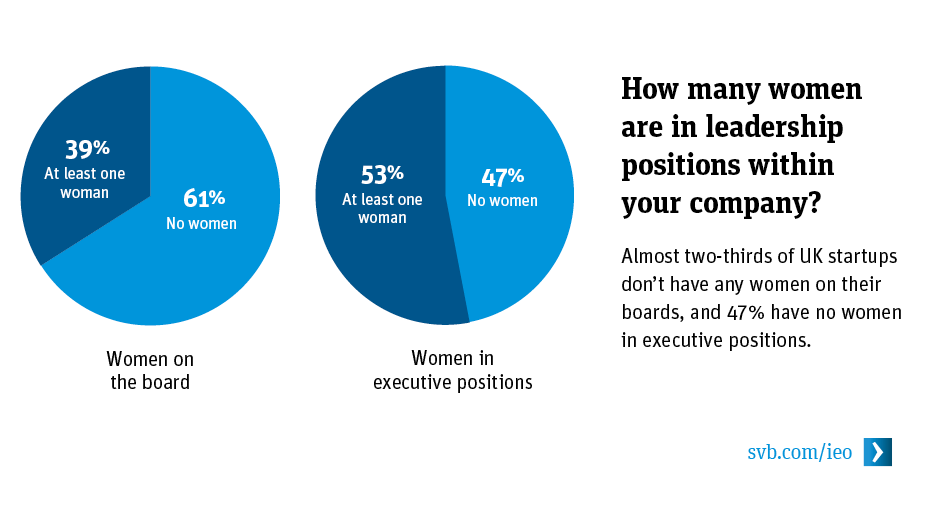 Nearly 60 percent of survey respondents said that access to talent is the most important public policy issue on their mind. “Access to foreign talent and [the] ability to bring people into the UK is the key,” a London fintech executive said. International trade, cybersecurity, consumer privacy regulations and use of independent contractors were also key policy issues. 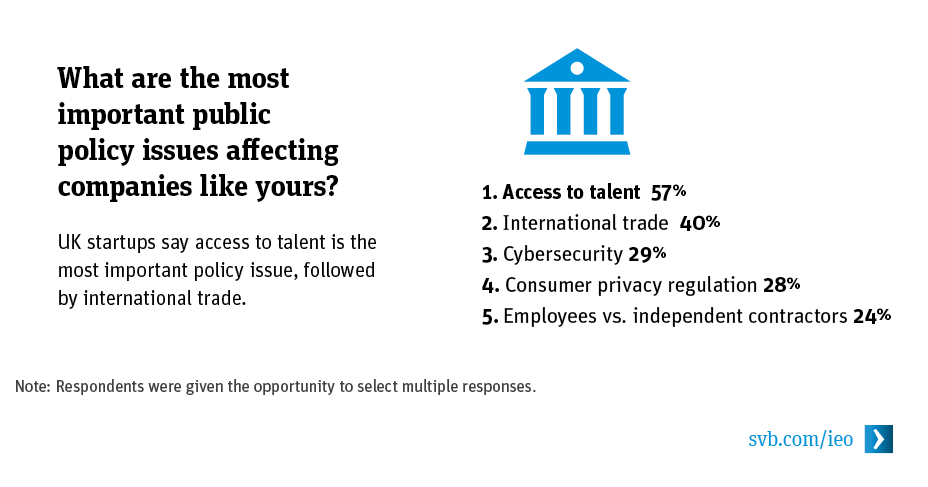 The material, including without limitation the statistical information herein, is provided for informational purposes only and is compiled from the survey conducted by Peerless Insights, a third-party source. The material is based in part upon information from third-party sources that we believe to be reliable. However, the material has not been independently verified by us, and as such, we do not represent that the information is accurate or complete. The information should not be viewed as tax, investment, legal or other advice, nor is it to be relied on in making an investment or other decisions.