Over the past few years, there has been an explosion of interest in special-purpose acquisition companies, or SPACs (pronounced “spacks”). In H1 2021, more money was raised through SPACs than in all of 2020, which itself was a record-setting year. In light of the booming market, many investors and entrepreneurs find themselves wondering what exactly SPACs are — and how they might be able to use them.

Silicon Valley Bank recently brought together four experts to discuss such topics as whether a SPAC or an initial public offering is the best way to go public, when SPACs are particularly advantageous and what companies should consider before using a SPAC. The webinar featured Olympia McNerney, US head of SPACs for Goldman Sachs Group, Inc.; Justin Hamill and Ryan Maierson, partners at Latham & Watkins, LLP; and Barrett Daniels, partner and west region SPAC leader at Deloitte & Touche LLP.

A SPAC is a shell company formed to raise capital via an IPO. The funds are held in escrow, then used to finance the acquisition of an operating company, most often in an off-market transaction. 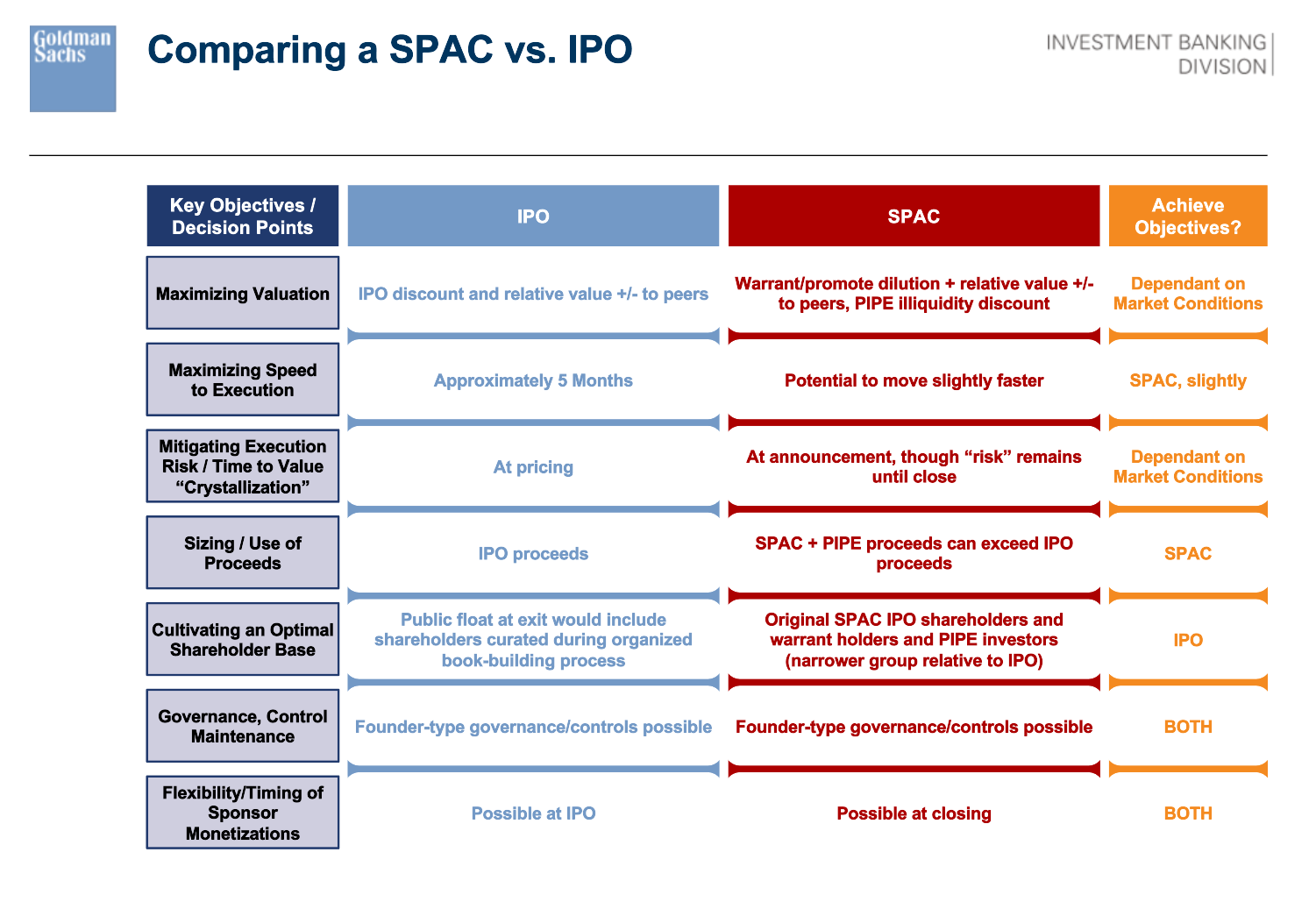 Proponents of SPACs say they offer more flexibility and better control over pricing than a traditional IPO. Although SPACs are sometimes billed as a faster way to go public, the panelists agreed that the timeline between a SPAC and an IPO is essentially the same.

What is a deSPAC

A “deSPAC” is the process by which a SPAC merges with an existing company, taking that company public in the process.

Once a merger target has been identified, the deSPAC process involves doing due diligence on the company; formalizing a letter of intent, or LOI; and getting approval for the merger from the US Securities and Exchange Commission by filing a Form S-4 proxy financial statement. During the deSPAC process, the SPAC also identifies investors, often through private investments in public equity, or PIPEs. Typically, the deSPAC process must be completed within two years of the SPAC’s IPO.

Why you should know about SPACs

Although SPACs were generating some interest prior to the COVID-19 pandemic, the number of SPAC deals and the amount of funding funneled through SPACs have increased dramatically since early 2020.

Consider the number of SPAC transactions in recent years:

Although interest in SPACs might not continue to grow at the pace it has in recent years, the panelists agreed that SPACs are here to stay.

What are the benefits of using SPACs

As discussed in SVB’s Q2 2021 State of the Markets Report, using a SPAC can be beneficial for companies that might not be good candidates for a traditional IPO.

SPACs allow founders to leverage the networks and expertise of SPAC sponsors, usually savvy financial professionals experienced in the IPO process. In addition, fundraising via a PIPE requires targeted marketing to specific investors rather than the broad-brush approach as with an IPO. As a result, SPAC marketing costs may be lower than those for a traditional IPO.

SPAC can be beneficial for companies that might not be good candidates for a traditional IPO.

SPAC vs. IPO: How the options compare

Companies trying to determine whether to pursue a SPAC merger or a traditional IPO should consider the following criteria, according to the panelists.

To maintain flexibility, companies can also select to follow a dual track, moving toward both a SPAC and a traditional IPO. This option is available until the point that exclusivity is demanded, usually when an LOI is signed with a SPAC.

The drawbacks of SPACs

Taking advantage of the current SPAC frenzy can be tempting, but it’s important that companies not do so until they are truly ready to go public. Companies that take this step too soon often have trouble sustaining their success post-IPO.

Companies considering a SPAC transaction should begin addressing these challenges before they formally start the SPAC process.

In addition, early-stage companies should be mindful of the forecasts they include in their SPAC regulatory filings. In 2020, half the companies that completed a SPAC transaction failed to meet their revenue forecasts, and 40% saw their revenue decline, according to SVB’s Q2 2021 State of the Markets Report.

Many companies considering SPACs do so in hopes of going public more quickly. Although a SPAC timeline can be expedited in the early phases, there is no way to speed up the SEC regulatory review. The panelists agreed that the time savings for a SPAC versus a traditional IPO is often minimal. 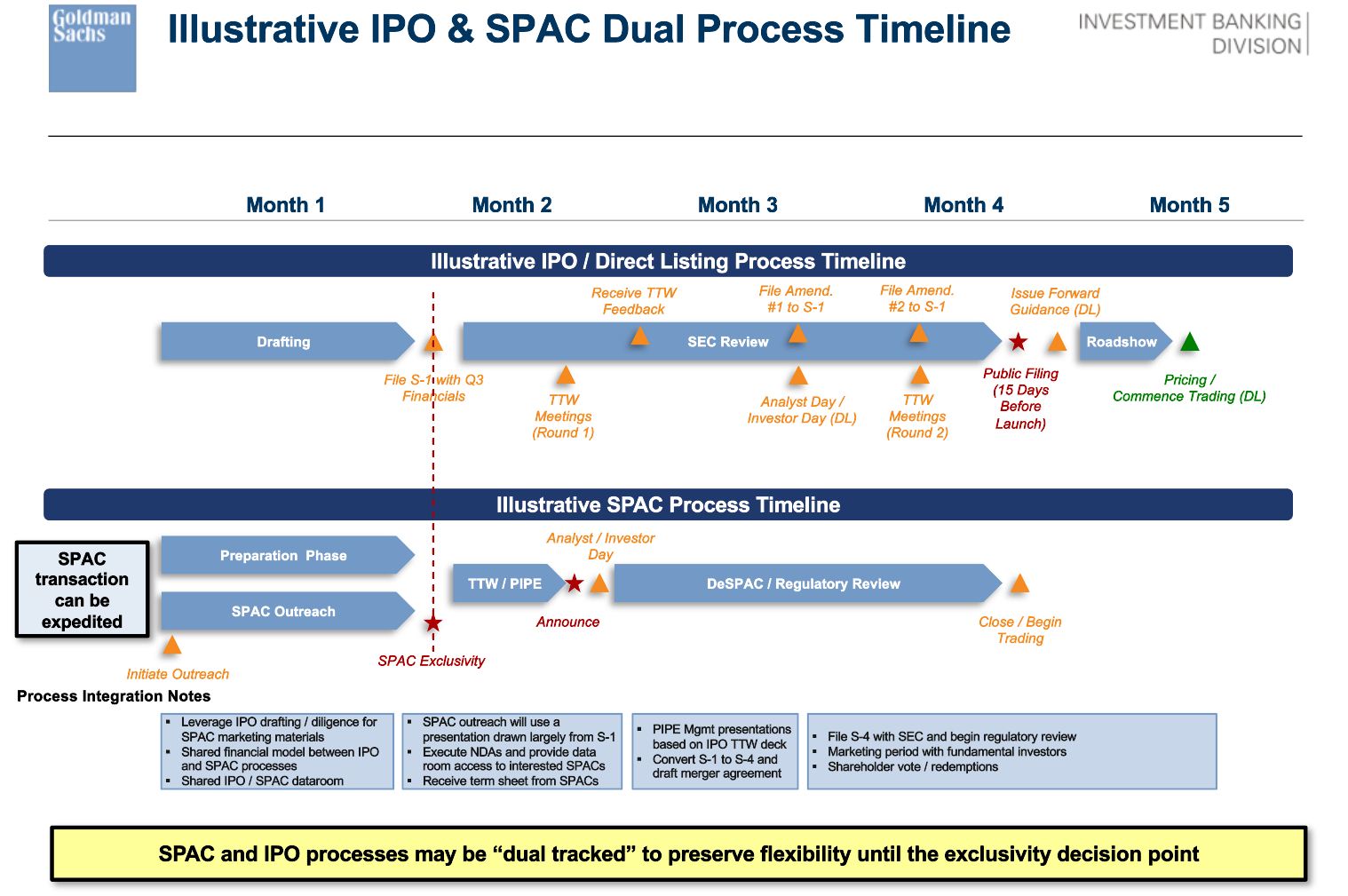 The timeline for a SPAC transaction and deSPAC merger can be divided into three phases:

Phase 2: Between LOI and announcement (roughly five to six weeks)

Before considering a SPAC transaction, a company’s leaders must honestly evaluate whether the firm is ready to go public. 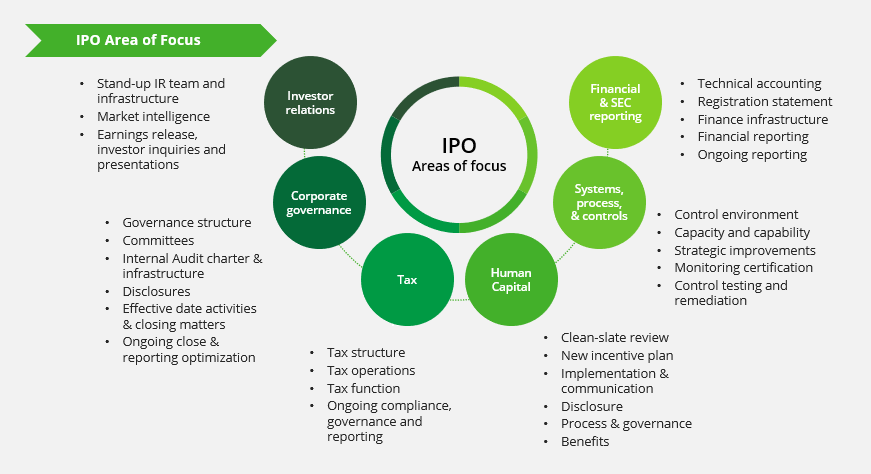 The panelists cautioned that people who are not familiar with SEC regulations often underestimate the complexities of the required reports and audits. Even companies with meticulous recordkeeping and quarterly reports will likely need to intensify their processes to meet SEC demands.

The process of becoming SOX-compliant is expensive and time-consuming, but some companies are able to defer SOX compliance for five years if they meet the criteria for emerging growth companies. The panelists recommended that companies participating in a SPAC take advantage of this provision as a way to ease their burden during the SPAC process.

SPACs are here to stay

Although SPACs may have once been thought of as a niche option, the panelists agreed that they are here to stay. Indeed, SPACs are a valuable financing mechanism for companies that don’t fit neatly into the commercial VC-backed operating model.

Want to learn more about SPACs from industry leaders? Reach out to Cody Nenadal at CNenadal@svb.com for more information about how Silicon Valley Bank supports SPAC transactions.

This blog represents views from the SVB webinar and featured panelists, and are not the views of Latham.

Economic conditions have become challenging for startup founders. Khaled Hussein shares some tips for survival during this economic downturn.