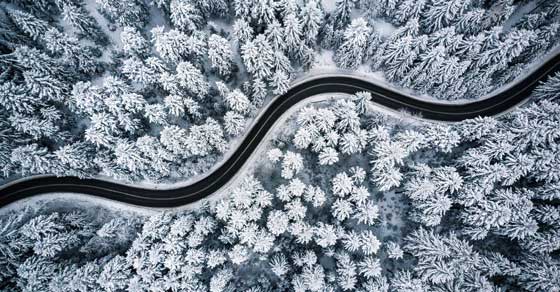 If you’re anything like me and others around the globe these days, your patience with the pandemic is wearing thin. In many ways, so much of what happens still seems out of our immediate control, and I believe many of us have come to the realization we will have to live with the virus (or its variants) for some time.

So where, then, should we turn our focus if not on things that are right in front of us? I tend to try to focus on the big picture whenever I can, both professionally and personally, because sometimes ignoring the short-term noise can be a useful skill. This is particularly helpful when looking at capital markets as stock markets can be volatile in the short and intermediate term, while over the long term, these bumps tend to smooth out.

So in this post, I am not going to focus on the short-term or intermediate issues that are in the news cycle right now, such as taxes, the infrastructure bill or the pandemic. Of course, those are all important topics, but they’re also well covered. Instead, let’s examine some macro geopolitical (read: big) issues and things that may be further away from us, either physically and figuratively, and how these may impact our lives in the future.

One place to monitor closely is China. As the second-largest economy in the world, China often does what it wants and does it in a planned manner, as evidenced by its consistent five-year plans.

China-US relations are also critical to watch. The recent long call between Presidents Biden and Xi should be noted, primarily because it appears that Biden is likely going to take the pragmatic route and relax a bit from an earlier stance. This is important because net-net, the Trump tariff strategy — which was pretty severe — mainly hurt US consumers and businesses and didn’t actually affect Chinese trade. If the tariffs that both countries imposed on each other could be reduced — and it looks likely that they will — it would certainly provide some needed relief for both economies, which is great in the longer term.

From an investment lens, there have also been myriad concerns about regulatory risks and China’s restrictions on its domestic technology industry. As a result, many international investors have reduced their exposure to China, though the magnitude of the discount may have been a bit extreme. After all, underweighting — or, worse yet, excluding — China would be unwise, given it is growing at twice the pace of the global average with a rapidly expanding middle-class consumer sector.

Another reason to watch is that there may be knock-on effects to the rest of the world if the Chinese government places overly restrictive measures on its technology industry. That said, contrary to many perceptions out there, the Chinese government hasn’t actually launched an indiscriminate attack on tech companies. If anything, heightened geopolitical tensions have made it even more critical for its tech sector to be supported. What the government has actually done is to restrain companies that it perceives as working against the national interest. What this means: It’s going after makers of video games (which it deems as addictive and at cross purposes) and overly expensive after-school tutoring companies.

Truth be told, there are few who could argue that these areas can be considered a bit predatory, so it isn’t actually that surprising. However, if you look at the way the government has treated private tech companies, such as those within the semiconductor or clean energy space, you’ll see that they actually continue to receive government support, and we would expect that to continue.

So how does this all shake out for the Chinese tech industry? Though it’s not entirely clear, what is completely conceivable is that China’s leading innovation economy companies will be asked to confirm their commitment to the communist party and its goals. If this happens, all will likely be well. Given this likelihood, I would think that the sell-off in Chinese tech companies is overdone and perhaps has even created some buying opportunities.

Without a doubt, President Xi is fully aware of the importance of Chinese private tech companies in ongoing China-US strategic competition and is unlikely to jeopardize any existing position of strength. The Chinese government has also been very vocal in reassuring investors that Beijing’s policies around growth and small business remain unchanged. To suddenly change that would cause a loss of face, which would be unheard of.

Another interesting evolving story is the China Evergrande situation. China Evergrande, which was one of China’s property development behemoths, has been struggling with default and just barely skating by, making eleventh-hour debt payments. Weighed down by more than $300 billion of debt, Evergrande has been unable to liquidate its assets to raise cash to pay its creditors.

This is a real test for Chinese officials, who previously would have stepped in in a heartbeat to save giants like Evergrande. But letting it fail also has implications for Chinese homebuyers who have purchased units from the developers. And there would be ancillary effects for construction workers and subcontractors. Some here in the West worry that China is in the midst of its own Lehman-style meltdown, but I find those comparisons overly dramatic. The Chinese government should not be underestimated when it comes to its control over the domestic financial system and its ability to keep systemic risk in check.

Though recent events seem perhaps overblown, it can’t be overlooked that China’s economic growth pretty much ground to a halt in the third quarter. And though real GDP was still 4.9% higher than last year, it barely grew compared with the second quarter, confirming a sudden loss of momentum.

Honestly, forward-looking indicators don’t look that encouraging either, and though policymakers have been responding to growth disappointments, their efforts thus far have been mediocre. That said, it would be hard to fathom more weakness would be tolerated because President Xi is just about to start his third five-year term, which always comes with a reshuffle in the ranks of government officials. In other words, there needs to be sufficient economic growth to ensure a smooth political transition.

That said, China also looks like it may be deleveraging again, which historically hasn’t ended well because it could cause the economy to stagnate or perhaps go into recession. But there are few challengers to Xi, so it will be interesting to see where this plays out.

What does this mean for the US-China relationship overall, and how might we be impacted here in the US? As with this pandemic life, it is likely that a new normal will need to be achieved. No matter what we think, and despite the competition between the two superpowers, there is a true interdependence, even amid the rivalry. Even on economic issues — where rhetoric, posturing, decoupling noise and punitive tariffs are where we tend to focus — the reality is that trade and investment data still show us that we are deeply interdependent on each other. Think about technology specifically. The global economy is fueled largely by both countries’ technology sectors, and they are both uniquely positioned. Both have world-class research expertise, deep capital pools and highly competitive innovation ecosystems.

And US-China trade and investment ties remain robust. In 2020, China was America’s largest goods trading partner, third-largest export market and largest source of imports. Exports to China supported an estimated 1.2 million jobs in the United States in 2019. Most US companies operating in China are there for the long game.

The end message is that we have to find a way to work together. Our success (and theirs) depends on it. I have every confidence that President Biden will see the bigger picture. It’s always important to see the bigger picture, isn’t it? The reality is that creating black and white lines will only limit flexibility, and we won’t be able to make a dent in serious global challenges like climate change, future pandemics and inclusive global economy recovery without pragmatic dealings with China. And that’s what really matters, isn’t it?

Is the economy improving? SVB Chief Investment Officer Jane Leung shares her expectations for what lies ahead.