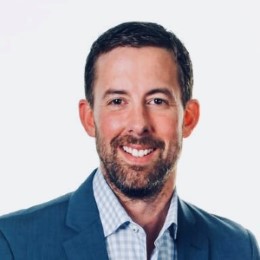 How a convergence of energy sources will fuel the next generation 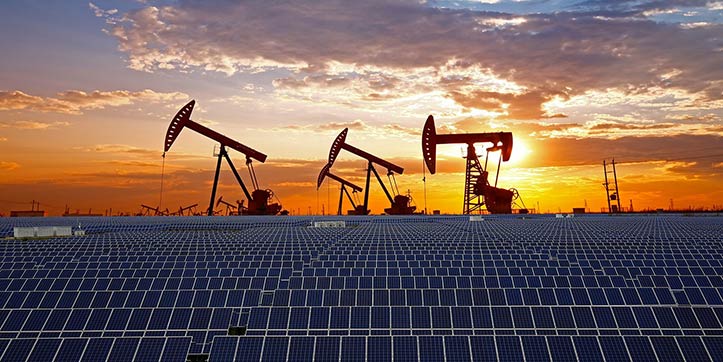 Far too often we see headlines touting dramatic growth in renewables yet forget the reality of our current energy predicament. While renewables such as wind and solar are growing at rates that outpace other energy subsectors, the reality is that conventional fossil fuels provide the majority of our energy and will remain a significant part of the energy portfolio. We bifurcate energy into “clean” renewables vs. “dirty” fossil fuels, but this dichotomy pits fossil fuel against renewable energy, preventing us from leveraging the unique benefits of both fossil fuels and renewables to develop a reliable and cost-effective portfolio of energy inputs that will continue to power the next generation of the global population. 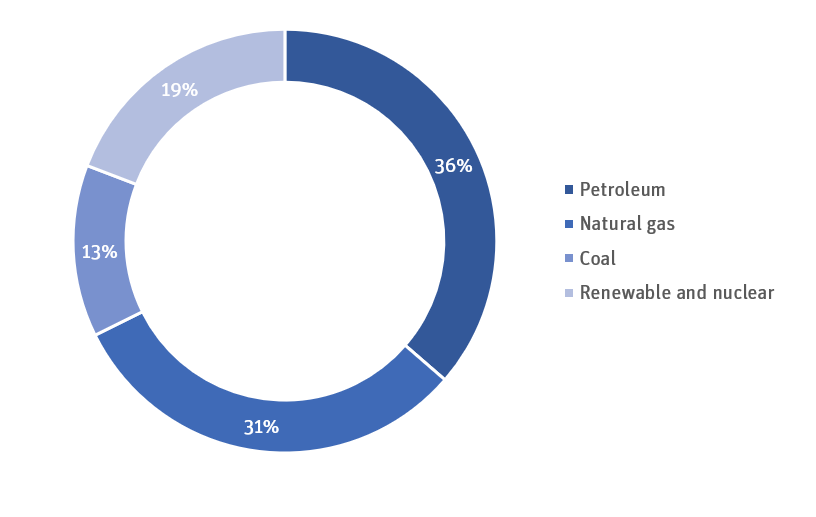 Global energy demand is projected to increase only 14% between 2016 and 2050, with the majority of the demand coming from developing countries. Not only will the population consume more energy but how we consume energy will change. With increased electrification, electricity demand is projected to double by 2050. This rapid increase will be driven by the electrification of such activities as transportation, space heating and water heating. Electric vehicle (EV) growth will fundamentally change the transportation sector. The International Energy Agency projects that EVs will comprise more than 30% of all vehicles worldwide by 2030; however, the US is projected to reach only 8% EV penetration by 2030. The low US rate results from the fact that the majority of EV adoption will likely be driven by policy, not price. 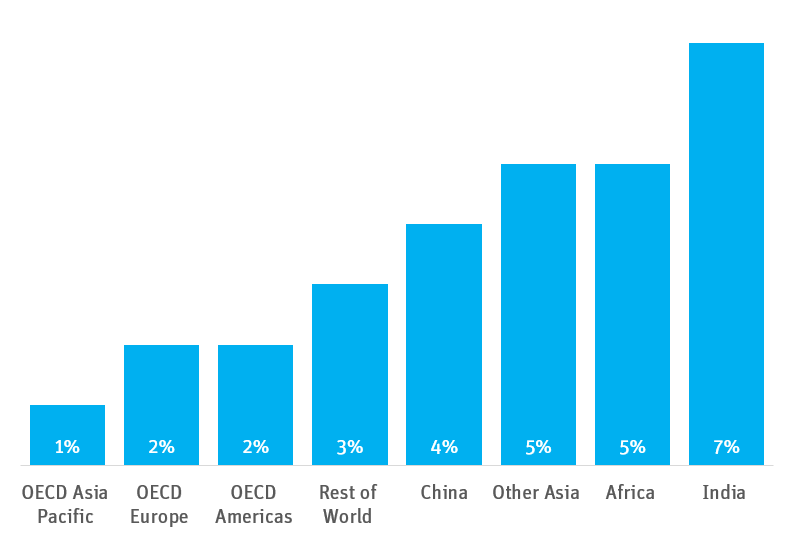 The face of energy has changed over the past 20 years and will continue to evolve throughout the 21st century. Innovation in the traditional energy sector has advanced rapidly, with improvements in horizontal drilling and well production efficiency. Advances in silicon production paved the way for lower-cost solar projects, and improvements to energy storage have made solar plus storage cost-competitive with other energy generation types. All of these advancements have caused significant declines in the full-cycle development costs of various energy resources.

Given the critical role that energy plays in the security and function of the US economy, the government has actively managed investment in the sector. In large part, taxpayers have subsidized innovation in the energy sector. Although data on subsidies is delayed, both renewable and nonrenewable energy sources have historically received significant subsidies, but this has declined in volume over the past several years. Renewables have received subsidies in the form of tax credits from the investment tax credit (ITC) and production tax credit (PTC). The PTC (used for wind) has been phased out as of year-end 2019, and the ITC (used for solar) will be phased out in 2021. 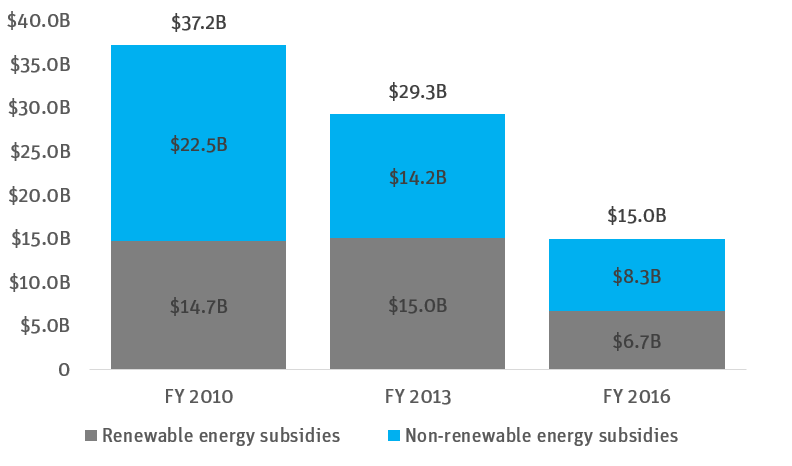 The tax credits allowed renewables to develop economies of scale and achieve the lowest levelized cost of energy (LCOE) among all electricity generation sources, which has led to a boom in the installed capacity of utility-scale wind and solar projects (many of which Silicon Valley Bank has helped finance). While the cost of wind and solar has declined, the cost of coal has increased, leading to the early retirement and securitization of many coal plants. Low-cost natural gas coupled with improvements in turbine technology has allowed the LCOE of natural gas to also fall significantly. 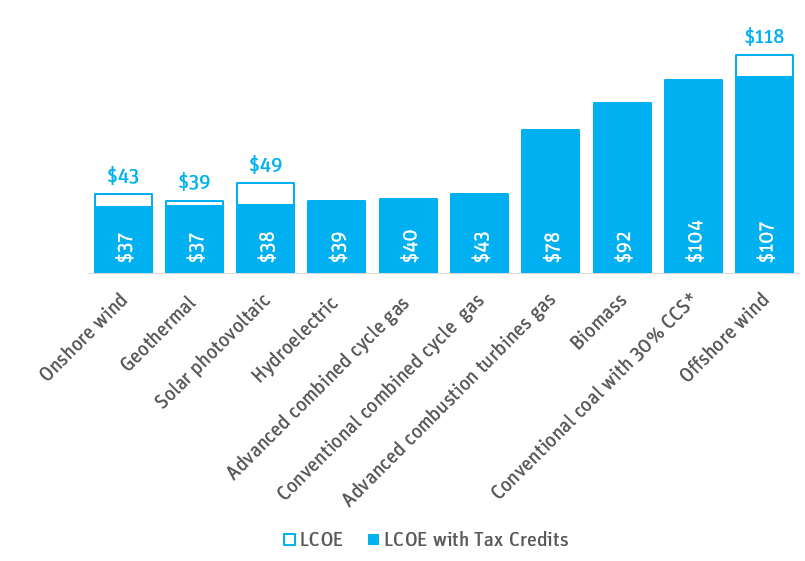 *Due to lack of data, conventional coal is an unweighted average; 30% carbon capture and storage (CCS) is required to meet emissions standards set by the Clean Air Act.

Even with the phase-out of the PTC and the ITC, wind and solar will remain among the lowest-cost power generation sources. Furthermore, although offshore wind is currently costly relative to other generation sources, the price has fallen more than 32% in the past year. This dramatic price decline, coupled with improving technology and larger 12-megawatt turbines with high capacity, has positioned offshore wind to potentially become a $1T industry by 2040.

The dramatic growth in renewables’ share of electric power generation stems not only from public subsidies and private-sector investment but also the public embrace of renewables as a means to mitigate emissions that cause anthropogenic climate change. The adoption of renewables is one of the main reasons why carbon emissions are projected to peak in 2024 and decrease by more than 22% from their peak through 2050. For the first time in modern history, carbon emissions and economic growth are decoupled.

Although emissions are projected to decline past 2024, emission levels are far above the base level determined by the Intergovernmental Panel on Climate Change required to avoid significant risks to human health, food security, water supplies, livelihoods and economies. The fact remains that many industries still depend on fossil fuels and are more than likely to continue depending on them. Chemical production, aviation, medium- and heavy-duty ground transportation, and cement, iron and steel production — as well as many other industries — all require significant quantities of hydrocarbons and are incredibly difficult to decarbonize. 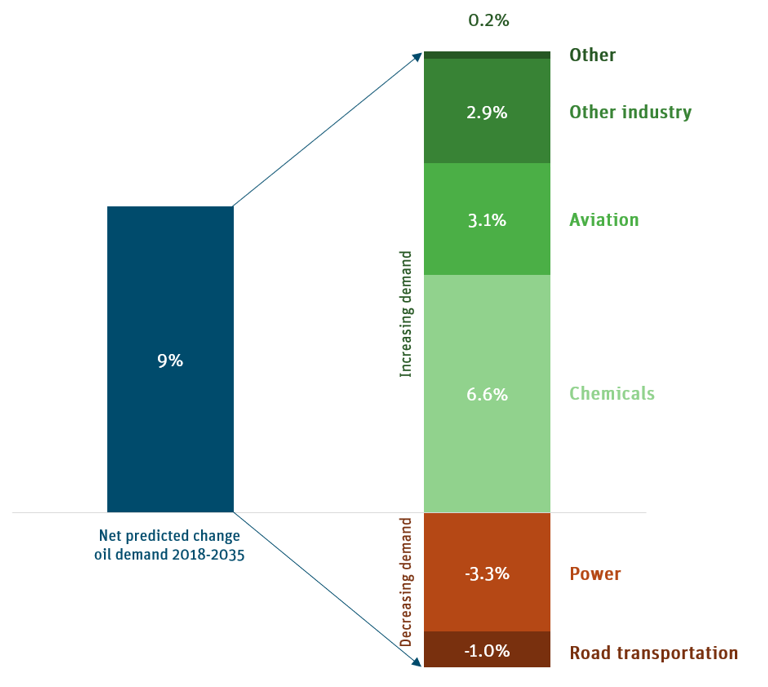 The realities of climate change coupled with those of the US economy cause tension between established industries that depend on fossil fuels and the growing number of people who are acting on the conclusions of climate science. While Americans express far less concern over climate change than do the people in most other developed countries, public opinion is changing in the light of a growing consensus among scientists and increased media attention. 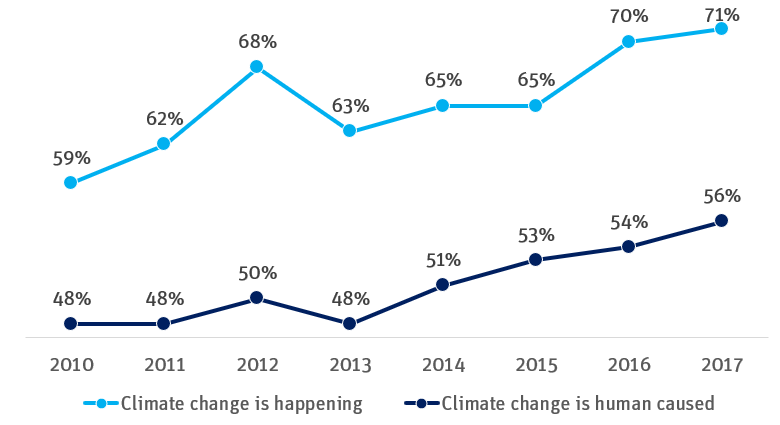 Renewables still face challenges: They produce only when the sun is shining or the wind is blowing. They cannot be dispatched on demand like traditional fossil fuel resources. Thus, natural gas generation will continue to play a role in the power generation portfolio, helping match the temporal differences in demand and supply. Natural gas prices are highly volatile, however, so many conservative utilities recognize the inherent risks of relying heavily on natural gas resources to provide baseload. 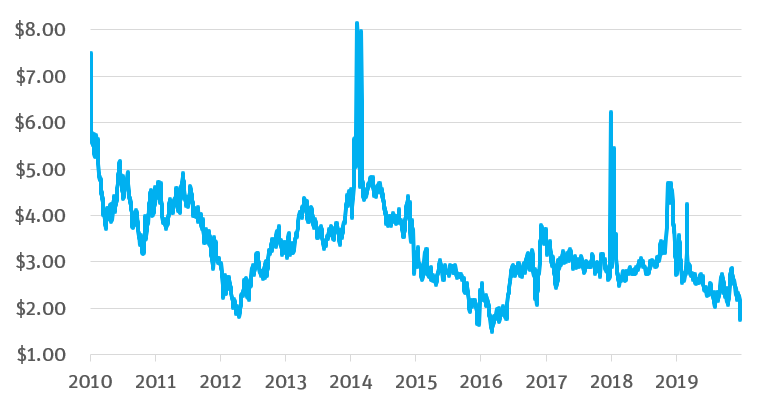 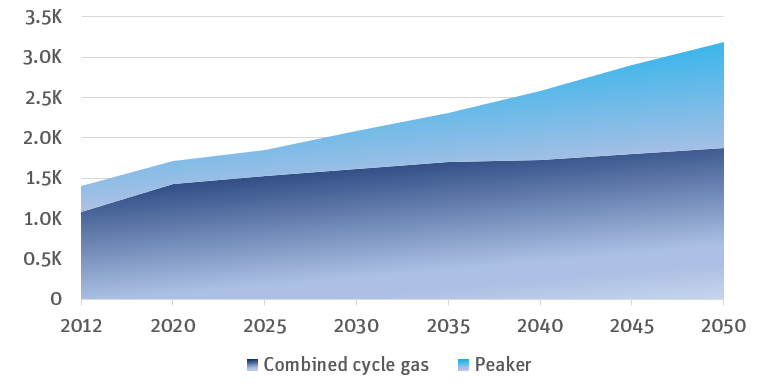 Energy optimization and demand response will be made possible by such new technologies as artificial intelligence, smart buildings and the Internet of Things. These technologies can enable utilities to dynamically manage demand for power by shifting time of use, saving customers money and decreasing system costs — all the while providing valuable grid services such as voltage regulation. These technologies will become more powerful as an additional flexible load is added to the electrical grid.

Decreasing reliance on fossil fuels in the electricity industry has led many of the major oil producers to follow the market opportunity into renewable energy. As I discussed in my previous post, major oil producers are actively pursuing investments in clean energy and cleantech. Royal Dutch Shell has declared the goal to become the world’s largest electricity company, and it plans to spend $1 billion to $2 billion on clean energy investments annually. It is unreasonable to treat oil and gas majors as the scapegoat and the sole cause of climate change, as multiple complex geopolitical, economic and individual decisions led to our current environmental state. Instead, oil majors and their investments into energy innovation should be viewed as an important part of our energy future.

By 2035, more than half the electricity supply will be met by renewables; but while renewables can provide low-cost electricity, much of the economy cannot electrify cost-effectively. Renewables and nuclear, which currently provide 19% of global energy, are projected to meet 34% of energy demand by 2050, meaning that 66% of our energy will come from fossil fuel generation. According to McKinsey, gas demand will peak around 2035, and oil and coal will peak in the early 2030s. Yet the growth of oil demand through 2030 will be driven predominantly by chemical production, not singularly for energy consumption.

Major sectors of our economy will remain powered largely by fossil fuels. Sectors such as industrial process heat, which accounts for about 7% of US energy consumption, require high temperatures that standard renewable resources cannot provide. Although solar and hydrogen technologies are being developed to provide this superhigh-temperature heat, industrial process heat will likely remain dominated by fossil fuels.

The reality of our energy future is complicated. We cannot simply switch to renewables, as many sectors could not achieve full electrification without significant costs, and the marginal cost of moving to 100% renewable energy generation is insufficient. Given the impact of climate change on human health and the economy, we cannot simply depend solely on fossil fuels to supply all of our energy, either. Thus, our energy future must be a mix of both fossil fuels and renewables to achieve a cost-effective and sustainable outcome.

While many people discount the relevance of fossil fuel resources in the future of energy, fossil fuels will continue to play a significant role, especially in sectors that are unable to leverage the benefits of electrification. Thus, it is critical to recognize that an efficient and effective energy future will come not from portraying renewables as antithetical to fossil fuels or vice versa but by recognizing the strengths of each resource. Renewables can provide low-cost electric generation with near-zero marginal costs and no emissions, while natural gas can provide power during times when renewables are not producing enough to meet demand. Despite the growth of electric vehicles, oil will still play an important part in transportation, especially for heavy-duty transport, where EV range and fleet costs make electrification inefficient.

Innovations will continue to advance the future of energy. In the electricity sector, the grid is ripe for disruption. Renewable generation will continue to increase, but the grid and distribution system are historically slow to innovate. Demand response facilitated by technologies developed in the innovation economy will keep costs low, improve system resiliency and enable utilities to have smaller installed generation capacity. Advances in fossil fuels will also play a significant role in the future of energy by improving the efficiency of extraction and distribution. Thus, our energy future will have a lower carbon intensity and be a significant contributor to the decoupling of carbon emissions and economic growth.

At Silicon Valley Bank, we believe that the next generation will be fueled by a diverse portfolio of energy resources, including fossil fuels, renewables and technologies to improve the efficiency and distribution of these resources. We have deep expertise in working with oil and gas, renewables and energy optimization companies. If you are working in the space and are interested in learning more, please don’t hesitate to reach out.

Silicon Valley Bank is committed to helping companies find commercial success as they develop technologies that address sustainability challenges. We offer financial and banking solutions for companies working in energy, resource sustainability, agriculture and food tech, mobility, water and other industrial sectors.
More on this topic 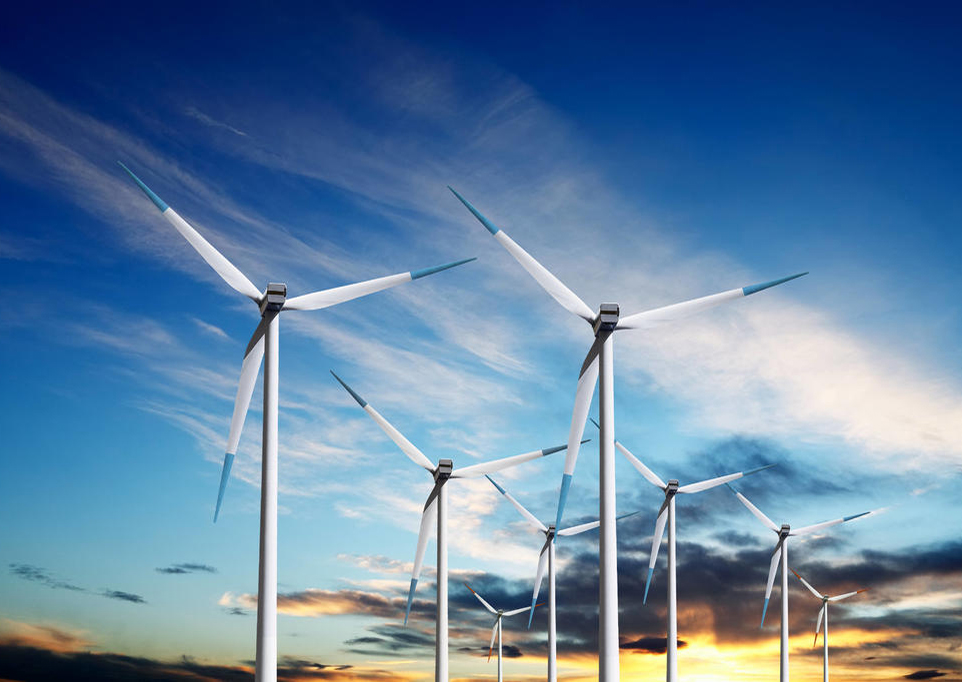 The New Era of Venture: Democratized, Specialized and Diverse

New data about the global venture capital industry shows that a fourth wave of VC is just beginning and will pick up momentum over the next few years. To stay relevant, venture firms will have to adapt for this era, which will see an explosion of...
Read more

Written by
Kelly Belcher
Kelly is responsible for development of new business, strategy and oversight as well as cultivating the energy tech ecosystem throughout the ERI global practice.

Stand Up and Be Counted: Take SVB’s Startup Outlook Survey