Clients often ask for my opinion of which asset classes and investments they should invest in, especially during volatile markets. Though the S&P 500 has largely rebounded from its steep drop between February and March, smooth sailing is unlikely for some time. In fact, with jobless claims and unemployment rates at unprecedented levels and small businesses across most industries in dire straits, economic recovery for many may not come as quickly as the rebounding equity markets would suggest. How, then, should we think about assets such as gold in the current environment?

Let’s take a look at the historical view of gold as an investment. It has always been the go-to currency when other forms failed, and there has always been some value of security placed on it by ancient and modern societies and economies. Because of this reliability element, gold has long been considered safe to hold in tough times. In modern portfolio construction, it’s been used as a hedge against inflation and deflation and as a means for diversification. As a global store of value, it is generally viewed as a hedge against uncertainty.

But in determining whether an asset may potentially move higher, it is important to understand the surrounding macro environment. The key factors to consider when assessing the strength of gold include monetary policy, currency movements, geopolitical risk and overall uncertainty (especially when analyzing economic data).

Let’s look at the current state:

Monetary policy – This is one of the most important determinants of gold pricing. Historically, gold has done extremely well in periods of significant monetary inflation. As we know, low interest rates have been a large part of the monetary equation since the Global Financial Crisis. Though interest rates had started to creep up, the Federal Reserve slowed the pace of increase after recognizing that their adjustments may have come a bit too quickly. It’s comparable to controlling the flame on your stove when even a seemingly small adjustment may burn your food if you are not careful. In that vein, they’d already started to make a dovish pivot last year, but now with the onset of the pandemic, global monetary policies have become extremely accommodative, dropping rates to levels previously unheard of and seemingly without any limit. Look at what we’re seeing with all the major central banks – short-term rates at zero or in negative territory. Rates are unlikely to switch course any time soon. Even as economies start to recover and shelter-in-place restrictions are lifted around the world, we won’t be back to “normal” any time soon. US jobless claims reached 40.7 million for the 10-week total as of May 23. While claims have been declining weekly, uncertainty around the restart of the economy continues and a rebound is likely to be slow. It could realistically take a number of years to reverse the resulting negative output. This likely would lead to continued easing of monetary policy. Good for the gold market? Check.

Currency – As gold is a form of currency itself, it makes sense that its price would be influenced by movements of other currencies. It is very sensitive to movements in the U.S. dollar because the price of gold is dollar-denominated. There is also an inverse correlation, when one goes up the other goes down. So how strong is the dollar now?

While the U.S. dollar has maintained its strength recently, it is not a given that this will continue, and with currencies, it’s all relative. I am inclined to believe that there is some weakness ahead. For one, the Federal Reserve has been the most aggressive among the major central banks on policy easing. With short-term rates where they are, there is little yield advantage relative to its global cohorts. Expansion of its balance sheet has been enormous and has happened at a much quicker pace than other nations. Obviously, all this should bode well for stimulating the economy, but it likely won’t help the dollar in the near term. Additionally, as other economies restart (with the U.S. presumably the largest and one of the last), the dollar is unlikely to remain a safe haven. Ironically, this actually could be good for the U.S. economy (as it could boost manufacturing output and increase profitability for multinationals, etc.), but that’s a whole other story. Weak dollar on the horizon? Check.

Geopolitical risk and uncertainty –In recent decades we have not seen such levels of global uncertainty. Certainly, there have been other economic crises and pandemics but seldom on such a global scale. Gold is the ultimate safe-haven asset and has historically performed well when there is turmoil. As much as equity markets hate uncertainty, gold markets love it. Ongoing Brexit negotiations, the upcoming U.S. presidential election, rising inequality here and abroad, COVID-19 pandemic and concerns around national security and safety of supply and food chains combine to create the veritable perfect storm. Throw in increasing U.S.-China tensions and U.S. signals of shifting away from international cooperation (e.g. freezing funding for WHO and potentially pulling out of NATO) and globalization. Clearly, there is a lot of risk and uncertainty ahead. Good for gold? Check!

The bottom line is that there is a strong case to be made that we are entering another golden era, quite literally. As such, this is the time to consider whether such a scenario could affect your portfolio and how to hedge against uncertainty.

May 2020 Market Commentary by Jane Leung

We have 30 years of experience partnering with innovators like you. Get customized personal banking and wealth advisory services from the bank that gets what drives you.
Learn more 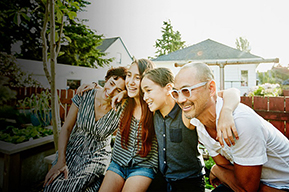