Sports were a big part of my upbringing and probably yours as well! Whether you are watching basketball and baseball in the US, or tennis and football in Europe, you are likely to feel the lasting impact of traditional sports. The problem today is that viewer numbers for these sports are falling off a cliff. The average age of viewers is increasing and the average number of people watching is dwindling. Broadcasters, publishers and content creators are turning elsewhere for growth, and the money is going where the young people are – eSports.

It’s getting harder and harder to ignore the shake-up eSports is causing all around the world. The numbers are impressive - there are currently 148 million eSports enthusiasts worldwide. As we move into a new decade the industry is expected to have surpassed $1 Billion. But this is causing much more than just a shift in the video games and tech industry; it’s a shift in culture. eSports is disrupting the way younger generations consume content, and its potential is only beginning to be explored in Europe. Traditional sports are struggling to capture eyeballs, while eSports competitions are regularly filling stadiums.

For the uninitiated, eSports is essentially competitive video gaming at a professional level. This means international teams gathering at global events to compete for million-dollar prizes, while thousands of fans watch live or through video streaming. Yes, not that different from the NFL or the NBA, except instead of American Football or basketball they’re playing League of Legends, Counter-Strike, Overwatch and other names that may be familiar to the parents and gamers among you. The eSports industry is now growing even faster than the established video games industry. In the US alone, eSports media revenues are predicted to surpass $200 million in 2020, growing over 20% year-on-year… and that’s just the start.

The professionalisation of competitive gaming is creating an entirely new industry ecosystem, with innovative media, tech and sports companies being created, supported by significant VC investment. The US has been a pioneer in that sense, with an impressive hub in Los Angeles. Perhaps it’s no surprise that the capital of entertainment is home to video game companies Riot and Activision Blizzard houses – two of the biggest venture-backed eSports groups. Cloud9 has already been through three funding rounds, raising $73 million, and Team SoloMid (aka TSM) raised $37 million in a Series A. Alejandro Guerrero, a managing director for SVB in the US explores in length the L.A. eSports phenomenon in this article. It’s a great read to better understand what is starting to happen in Europe.

Europe is joining the raid, but still needs some more XP

If you want a practical example of how fast eSports evolved in the last few years, take a look at Denmark. Astralis Group, the largest Scandinavian eSports organisation, started competing in 2016 as one team. Now a group formed by three teams - Astralis, Origen and Future FC - Atralis Group listed on the Nasdaq First North Growth Market in December 2019. The listing was oversubscribed and has put Europe firmly on the map in terms of investment opportunities in eSports. To date, Astralis has collected over USD$ 7.5 million in prize money, and according to Esports Earnings, it ranks them as 18th in the world. The current number one eSports team in the world is Team Liquid, with roots in the Netherlands, they are now a multi-regional team based in Los Angeles. In second place, is a team based in London, Fnatic. European eSports is thriving, with other major hubs in Germany, Poland, France and Spain.

Although the major EMEA hubs are growing in importance in the global industry, there is still growth potential in many countries that still have a strong traditional sports market. In the UK, for example, there are 36.6 million gamers, of which 6.5 million watch eSports, according to the British eSports Association. Premier League football still dominates in terms of sports viewing and revenues (£5bn+ in revenues and counting in 2019). But eSports is growing incredibly rapidly, with around 10% of the UK population engaged in watching competitive video gaming.

From NFL to LoL

Companies who are noticing this shift and embracing it, are creating products that speak to this new audience of sports fans. This is the case with BLAST Pro Series, an innovative global live tournament that brings together the excitement of live entertainment and gaming. The audience of BLAST Pro Series in Copenhagen, which was televised, already trumps major sports events like the Olympics when it comes to audience aged from 15 to 39 years old.

Gen.G is another example of a company that is embracing the shift towards eSports and is a partner of SVB. As a global eSports company, it owns and operates highly skilled teams competing in the world’s biggest competitions in games including Overwatch, League of Legends, Fortnite, Call of Duty and Apex. 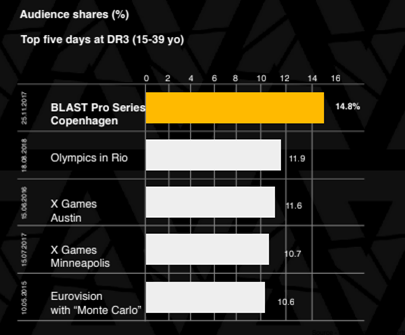 Meanwhile, according to a study by BLAST Pro and Magna Global, the NFL added four years to the age of the average audience in the last 10 years, reaching 50 years old. The same thing is happening with Major League Baseball, whose average viewer is now 57. Even the younger audiences on traditional sports, like my beloved NBA, and the English Premier League, average 42 and 41 years old respectively.

In contrast, the eSports viewer averages from 15 to 35 years old, which from a consumer and a marketing perspective is where every brand wants to target. Millenials are the world’s most populous generation, and a study by Pew Research estimates that they will become the global share of the population with the highest spending power in 2020. eSports companies are ready to capitalise on these opportunities because they understand the type of content the new generations want to consume.

A game-changer in audience engagement

eSports is personal, with the fan experience deeply embedded in following the players on social media. Close to two million fans follow Danish player Søren Bjerg as he trains on Twitch, one of the main streaming platforms for gamers, and the list of eSports influencers goes on and on. Digital influencers have already transformed other markets such as fashion retail, and it’s clear that the rise of eSports is part of their impact on the video game industry, especially as you can access eSports content anywhere and on almost any device. Another aspect we must consider when analysing this emerging industry is that video games are so much closer to everyone’s reality. Outside of high school basketball or football teams traditional sports are not easily accessible to everyone at a professional level. For video games, all you need is an internet connection and a console or a computer - it is accessible to all.

Before organisations dismiss this as the “millennial thing” of the moment, they need to take a step back and look at who are today’s gamers. The average age of gamers is 35 years old, and a US survey shows that 38% of people aged 50 and older play video games. And although most eSports tournaments are still targeted at men, gamer girls are already on par with them. Casual gamers already represent a wide range of demographics, and this is where lies the key to advance eSports from underground subgenre to mainstream.

As this industry continues to grow, more organisations will start to see its potential, or they might miss the chance to engage with the audience they have had the hardest time reaching. eSports is ultimately about entertainment and content. It fills stadiums and attracts hundreds of thousands of people to live streamings. But it is also about technology – from accessories to network connectivity. The growth numbers we are seeing today are only the beginning of a fundamental shift in what we think of as “sports” and the potential monetisation opportunity.

Written by
Bailey Morrow
Bailey leads the vertical with extensive UK and US experience supporting VC-backed, high-growth companies with banking and lending solutions.
Sign up for insights from across the innovation economy
Subscribe now

Insights to inform your decisions for venture investors and management company executives.