Venture debt is widely discussed in startup circles, but often misunderstood. Venture debt is a catch-all term referring to loans tailored to the needs and risks associated with investor-backed tech and life science startups. Venture debt often is secured at the same time or shortly after an equity round – with a goal of extending runway and increasing valuation before going out for the next round.

Companies in the venture ecosystem share a capitalization strategy deliberately organized around raising equity from professional VC’s to massively accelerate their growth rate and scale. The venture debt market consists of a relatively small universe of lenders that provide loans which explicitly rely on the borrower’s continued access to venture equity as the primary source of repayment for the loan. This type of loan, typically referred to as growth capital, differs from loans that rely on other sources of repayment, such as cash flow or the collection of accounts receivable. These loans are targeted at companies that have raised institutional equity from venture capital firms or similar sources. 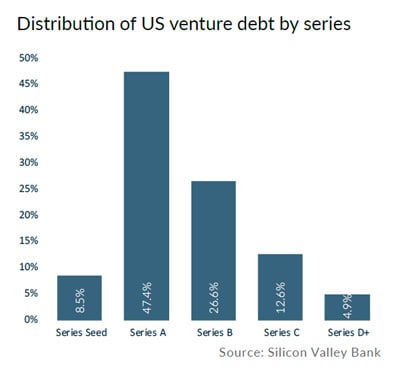 Venture debt lenders evaluate both the durability of support from existing investors and probability of attracting interest from new, outside investors to ensure the loan is repaid. For these reasons, venture debt is deployed most broadly at the Series A stage, when reserves among the existing syndicate are typically at their apex and valuations are heavily influenced by anticipatory metrics, including technical or product development milestones.

Looking back over the last eight quarters of proprietary SVB data, debt-to-valuation ranges have remained fairly consistent – buoyed by either increasingly larger equity round sizes at the early stage or increasing valuations at the late stage.

Debt to Valuation by Quarter

When we look by Series, the picture becomes clearer.

Debt to Valuation by Series

Typically, Series A-B companies raise equity that supports 9-12 months of runway and venture debt supplements that by providing an additional 3-6 months. While the median debt-to-valuation ratio is typically higher for Series A-B than for later stage companies, the average equity round is also smaller which in turn means the average loan size is smaller. This provides early-stage venture debt lenders with portfolio granularity when they are making a decision about a deal.

In contrast, later-stage companies (Series C-D) typically have lower median debt-to-valuation ratios, but the average loan size grows along with the equity size for each successive round. The universe of companies that receive successive rounds of equity shrinks over time as valuations are increasingly correlated to business execution and less competitive companies disappear. Loan size has increased with each successive round, too much debt can impact future equity negotiations.

In today’s environment, some patterns common to the venture debt market are shifting. In prior business cycles, the equity progression described above (larger equity rounds / lower debt-to-valuation ratios) often forced the most successful later-stage companies to diversify their investor syndicate beyond the VC ecosystem – in order to satisfy the increasingly larger funding cycles required to grow at scale. It was also generally true that super-sized equity rounds often could not be accommodated in the private market, which drove companies to the public markets or an M&A deal.  But now this pattern has reversed.

The abundance of cheaper, late-stage capital has changed these dynamics. Super-sized rounds are now routinely being filled with private rather than public equity. In addition to being abundant, later stage private equity has also been relatively cheap (for breakout companies) in historical terms. As a result, the super-sizing of the largest late stage funding’s has effectively outstripped the capacity of the venture debt market to ‘match fund’ in some examples, and the highly competitive pricing dynamic for those same examples has increasingly placed later stage equity in direct competition with venture debt.