Companies are now raising capital faster than ever before. Blink once and your competitors have already raised an extension round at two times the step-up. Blink twice and they’re sprinting toward a special purpose acquisition company (SPAC). In this rapid-fire fundraising environment, just how should entrepreneurs be thinking about timing their next round? While more of an art than a science, fundraising is a function of several factors, many of which are addressed in this article to help you time your next fundraise. Though there are multiple considerations in evaluating your next round, fundamentally these considerations should be viewed under two lenses: 1) defensively in budgeting cash runway and 2) offensively in cash planning for your next commercial milestone.

In timing your next capital raise, if an oversubscribed round is your endgame, then basic cash planning should be your starting point. Every company should, at a minimum, have low, base and high cash runway scenarios built anywhere between 18 and 36 months as a standard guardrail in place. These cash runway scenarios, plus the assumption that it could take anywhere from a few weeks to six months to raise a round, help round out a basic defensive strategy for capital planning.

Unsurprisingly, data indicates much faster timing between rounds than cash planning scenarios would imply, even when accounting for the months it takes to raise. Take for instance that SVB's 2020 State of the Market report touts the median time between Series A and Series B rounds as 1.8 years for the bottom 25th percentile of funds and 1.1 years for the top 25th percentile of funds. The implication here is that most companies are not (and should not be) thinking about fundraising simply as a function of cash runway. Instead, they should think of it as something opportunistic that is predicated on market conditions and commercial goals.

Exhibit 1. US Tech: Median Time to Next Round by Pre-Money Valuation and Series1

But before we move to offensive thinking, to paint fundraising with such a broad stroke would be doing entrepreneurs a disservice, as there are many variables to consider, notably among sectors and business models. As sector often correlates with business models, Exhibit 2 shows the differences in valuation, capital raised and time between rounds among four large tech sectors: frontier, enterprise, fintech and consumer.

From this, we can surmise that frontier companies raise more capital at higher valuations between their Series A and Series B but take more time to do so. This is likely a function of growing into their valuation with increasing progress between rounds, or simply of investors demanding more from frontier companies at the Series B stage. Consumer deals, on the other hand, raise less capital at lower valuations, which is likely a function of even more pronounced flight to quality in the category, where a few winners at this stage absorb much of the capital allocated to the sector. Enterprise deals have the shortest time to raise between sectors due to much of the hype surrounding the category, raising larger rounds at higher valuations at this stage. Lastly, fintech, sitting squarely in the middle of all these categories across metrics, likely speaks to the versatility of business models facilitated by the category — including consumer-oriented fintech models such as Opendoor, enterprise fintech platforms such as Capitolis and frontier fintech platforms such as Diagnostic Robotics — all at play.

Exhibit 2. 2020 Median Pre-Money Valuation, Time Between Rounds and Capital Raised by Sector at the Series B2 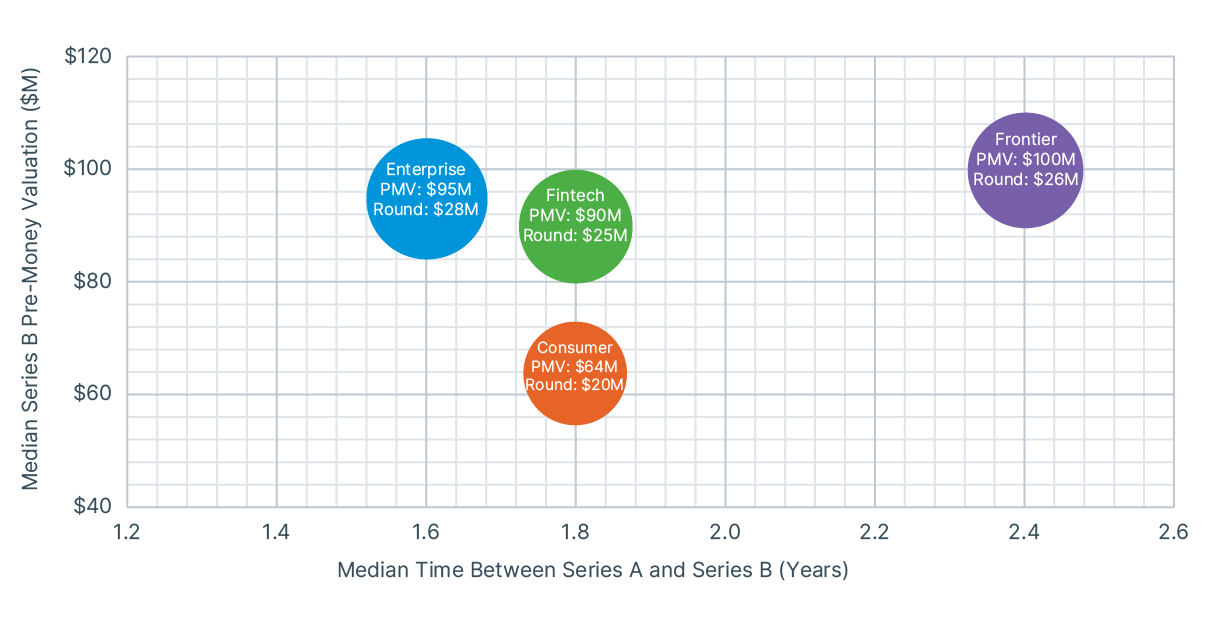 Now it’s time to play offense. Markets are strong and demand is there, so it’s time to think about raising capital to achieve your near-term business goals. In thinking about the next phase of growth, entrepreneurs should be mindful that investors will expect companies to achieve certain milestones to ensure efficient use of capital and for the company to sustain an upward valuation trajectory. To accomplish this, capital raised will need to prove out the model or the product. This could include field testing and pilot sites, establishment of contracts, or references from customer proxies. This should specifically be contemplated with the nuances of your business model and/or sector, as no two companies are alike. To provide more color around these fundraising proof points, some SVB industry experts weigh in on what these milestones might look like in their respective industries:

How much to raise?

Now that you’ve considered when to raise, it’s time to assess how much to raise. Specifically, just how important is this capital being raised relative to your near-term objectives? Raising a large round makes sense in many scenarios, particularly with companies that have proven out their go-to-market strategy, distribution channel(s) and/or landed a recent multiyear contract. In this case, pouring fuel on the fire may justify the sizable capital being raised for an outsized valuation.

But if these are pie-in-the-sky milestones, raising less now may allow companies to accomplish near-term milestones more thoughtfully without risking valuation overhang. Beyond this, in an age of monster rounds, raising too much too soon can have its drawbacks. Coffers flush with cash from a giant raise can often result in unwise spending and systematically high cash burn. In a worst-case scenario, this could result in both valuation overhang and unsustainable operating structure that creates an even more challenging fundraise on an increasingly limited runway.

Of course, a key consideration here is the effect of a raise on your company ownership as an entrepreneur. At the Series A stage, entrepreneurs can expect to sell around 25%–30% of their company. At the Series B stage, this drops to approximately 20%. And at Series C, it is 15%–20%. Under these assumptions, following a Series D round, your 100% ownership is now less than 30% ownership of your company (and that’s without a co-founder)! As with all considerations discussed, these figures are not to be interpreted in a vacuum, and different stages between different business models bring with them their own unique considerations. However, the story remains the same, specifically around the importance of being thoughtful and efficient with the capital you are taking on at each round.

Exhibit 3. 2020 Dilution Expectations per Round per Sector3 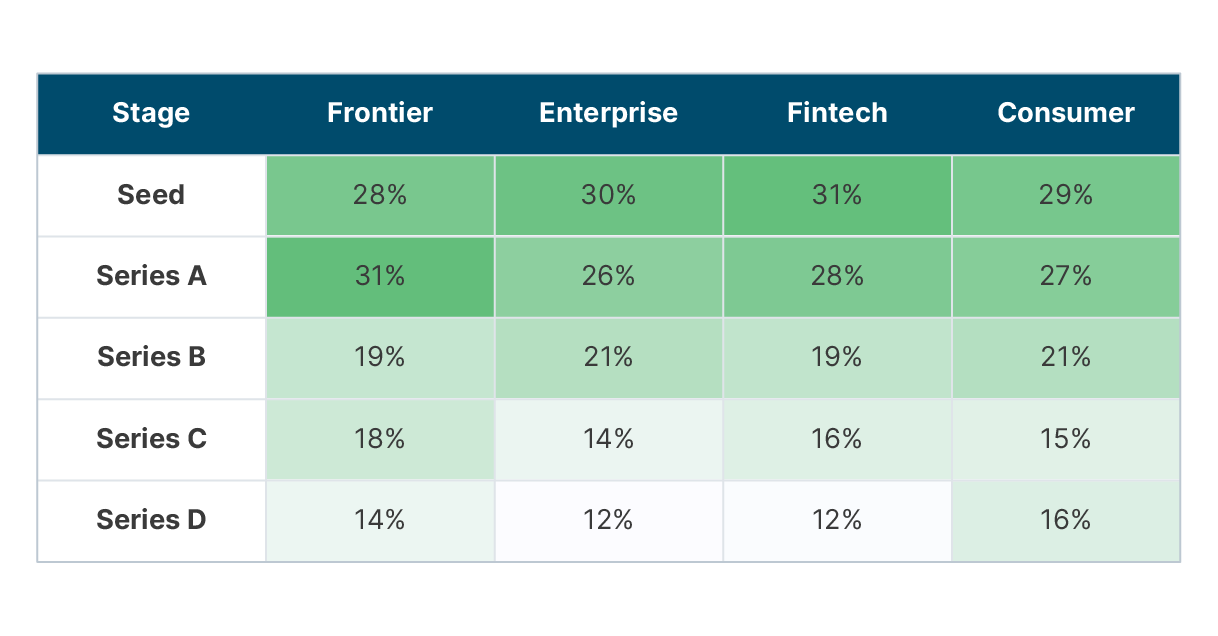 There are several considerations when deciding the timing for your next fundraise. Defensively, fundraises should be thought about as a function of cash runway with low, base and high cases to accommodate varying growth scenarios. Offensively, entrepreneurs should factor in the capital needed to achieve target milestones and industry expectations at each stage, all under the notion that it can take you and your team anywhere from a few weeks to six months to raise. If this feels like fundraising in perpetuity, well it kind of is. This is where entrepreneurs should lean on their board and existing investors. This is also where a business development seat or strategic finance team can come in handy for founders and CEOs. By leveraging these folks to perpetually maintain warm relationships with venture capitalists, screen new venture partners and refresh information that allows investors — who are increasingly data-focused — to underwrite more efficiently, you have more time to do what you do best and build your company.

Special thanks to Austin Badger, Alex Choy, Denny Boyle and Jess Waller for providing insights and feedback on this post.

Written by
Dave Mullen
Dave Mullen is an investor at Silicon Valley Bank (SVB) Capital, where he is responsible for covering the fintech platform and its direct investing strategy.
Sign up for insights from across the innovation economy
Subscribe now

Cybercrime is on the rise. Jenni Halleran, SVB's Deputy BSA Officer and Head of Financial Crimes Investigations, shares with you effective ways to protect against the latest cybersecurity threats.

5 Tips for Fundraising During a Downturn for Startups

Common scams to be aware of this holiday season

Micaela Amaroli, Sophie Nazerian
Read more
You are now leaving Silicon Valley Bank (SVB)
You will be directed to a different website or mobile app that has its own terms of use, visitor agreement, security and privacy policies. SVB is not responsible for (and does not provide) any products, services or content at the third party site or app, except for products and services that carry the SVB name.
I understand, let's proceed Stay on SVB.com