June started with mild trading, but by mid-month financial markets were turned upside down by two key events: First, the June 10 CPI report showed that following April’s reading of 4.2%, headline inflation rose 5% in May YoY. The market’s reaction was atypical with the Dow Jones being hit hard, the tech-heavy Nasdaq rallying, US Treasury 10-year yields falling 10 bps to 1.46% (its largest one-week drop in a year), and the dollar stabilizing.1

Second, following the FOMC’s mid-June meeting, Fed Chair Powell said rising inflation was attributed to “transitory factors,” stating that the Fed will “maintain an accommodative stance of monetary policy” as long as “inflation averages 2% over time and longer-term inflation expectations remain well anchored at 2%.” Fine, but then came a hawkish surprise. The Fed’s “dot plot” of projections showed that FOMC members now believe that the Fed funds rate will be raised at least twice in 2023—earlier than previously reported. Seven of the 18 members anticipate a potential increase in rates as early as 2022. Markets reacted quickly with stocks collapsing, bond prices rallying, and the dollar soaring.2

Global investors were caught off guard. Those who had embraced the “reflation trade” narrative of economic recovery, rising bond yields and a weaker dollar, took it on the chin. While many investors are reassessing their confidence in the narrative, others are holding firm, using the recent sell-off as a buying opportunity. We remain believers in the reflation trade narrative:

Dollar jumped after Fed’s hawkish tilt. The dollar started June on its back foot, but it reversed and jumped higher following the Fed’s hawkish tilt at its mid-June meeting. The dollar showed broad gains, its biggest against the NZD, NOK and AUD3 – all “commodity currencies” previously bought up by traders expecting higher commodity prices fueled by strong global economic growth.

US economy showed signs of strength. Hiring surged in June as employers added 850,000 workers, the largest gain in 10 months, and encouraging sign following uneven performance earlier in the year. 4 Despite June’s gains, US employment remains far below pre-pandemic levels with over 9m people still unemployed, compared to 5.7m in February last year.5

Consumer prices grew by 5% in May YoY.6 Stimulated by the easing of lockdown measures and large government stimulus programs, consumer demand pushed up prices at gasoline pumps, home supply stores, supermarkets and used car lots. The rare combination of supply shortages, excess savings and pent-up demand account for most of the price increases.

World economy began to enjoy a spirited ‒ but divergent ‒ recovery. The world is enjoying one of its strongest recoveries since WWII. The recovery is attributed to the success of vaccine programs, however, there is a divergence in recovery for nations with limited vaccine programs.7 Some parts of the world with higher vaccination rates are rebounding nicely, while many of those with weaker programs are not.

Corporate bond spreads dropped to lowest levels since 2007. The rate spread between ultra-safe US Treasuries and risky corporate debt has dropped to its lowest level in more than 10 years.8 Many ‘yield-hungry’ investors are buying into the Fed’s position that consumer price increases will prove transitory as the economy reopens, pushing expected inflation rates lower.

Chinese renminbi retreated from a sharp rally. In May, following China’s rapid recovery from the pandemic and resulting strong investment into Chinese stocks and bonds, the USD/CNY dropped to 6.3570, a three-year low.10 In June, the PBOC (the People’s Bank of China) stepped in to slow the rally in the CNY by forcing Chinese lenders to hold more foreign currencies.11 The PBOC seems content with current levels. This measure may serve to put speculators on alert that a stronger CNY is not a one-way bet. 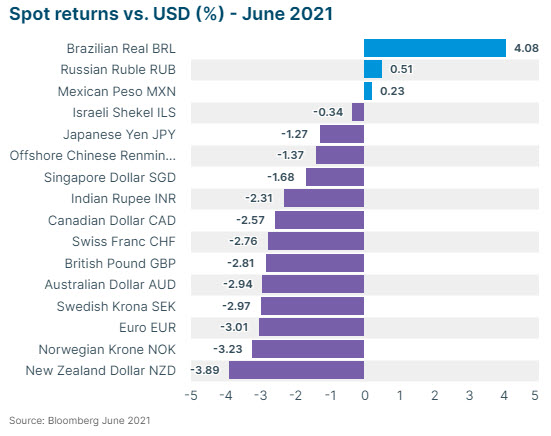 Major central banks reassess policy as recovery quickens.12 During June, each of the Big Five central banks met and set their respective monetary policies. Market players were looking for any changes to policy or clues on when emergency monetary stimuli might unwind.

The global recovery will likely be led by US/Europe and not China. China faces a credit cycle that has peaked, while the US has a new stimulus spending package and the EU has its own €800 billion national recovery package. The US and Europe are reopening as well, continuing the economic boost, while the recent G-7 pact focuses on ways to counter China’s global growth initiatives.13

Commodities may be entering new ‘supercycle.’ A growing number of analysts believe commodities are entering a ‘supercycle’ of rising prices. Commodity prices have been climbing since last April, and in June, the popular Commodity Research Index reached its highest level in six years. Oil prices reached their highest level in two years, as WTI (West Texas Intermediate) moved above $74 a barrel. Commodity traders expect it to return to $100 per barrel for the first time since 2014.14 Latin America is a major exporter of agriculture, green metals and other commodities (Peru and Chile alone supply 40% of the world’s copper), so it should benefit more than most EMs.15

European economies bouncing back, with inflation. EU business activity, employment, consumer and business confidence are rebounding strongly, along with inflation. Inflation in the eurozone jumped from 1.6% in April to 2% in May, reaching the ECB’s target for the first time in over 2 years.16 However, the ECB said this is a temporary rise that will trail off next year, implying that it needs to maintain supportive policies for the time being. Uneven recovery among the eurozone’s 19 countries (with Germany likely to recover faster than others) poses a challenge for ECB monetary policy. Last week, after lifting Covid-19 restrictions, Spain reported a rebound in its services sector for June—its largest in over 20 years.17

Euro depreciates, and European exporters are loving it. A spokesperson from CPR Asset Management, referring to the month-long rally in the US dollar against the euro, said “The European export and tourism markets are benefiting from euro depreciation.” 18 Another tailwind for European equities is the composition of the continent’s stock markets, which are heavily weighted towards cyclical stocks that benefit more from Europe’s reopening.

A sleepy summer for FX markets? After an exciting Q1 when the dollar unexpectedly rallied, then collapsed in early Q2 before rallying again near quarter-end, FX trading seems to be winding down. Remarkably, most of the trading has been within a 4% range (in the major currencies), leading some traders to expect tight ranges over the typically quiet summer months…or even longer. We disagree. We anticipate nervous investors will adjust positions in anticipation of the Fed tapering asset purchases, which may be announced as early as its July 27-28 meeting.

Olympics without fans? An increasing number of Covid-19 cases in Japan is putting pressure on the Japanese government to reverse course and proceed with an audience-free Olympics. The growing presence of the Delta variant and the country’s delayed vaccination program (only 24% have received a first dose) are raising fears of a full-blown surge when the games begin July 23.19 One of the worst performing G-10 currencies in 2021, the Japanese yen has yet to react to any news related to the Olympics.

Is the strength in the Dollar “transitory”? Yes, we believe it is transitory. There is a high probability that over the coming months, the values of foreign currencies will change based on significantly uneven/unsynchronized recoveries of the world’s economies and as central banks reduce emergency monetary stimulus. Eventually, the secular decline in the US dollar should resume.  July/August may be an important gauge of underlying dollar sentiment.

7 “Why the biggest global boom since WWII won’t be good for everyone, according to World Bank.” Business Insider. June 8, 2021.