As the US dollar continues its mixed performance against emerging market currencies this year, the South African rand has become the top performing EM currency in the world, despite being one of the most volatile. 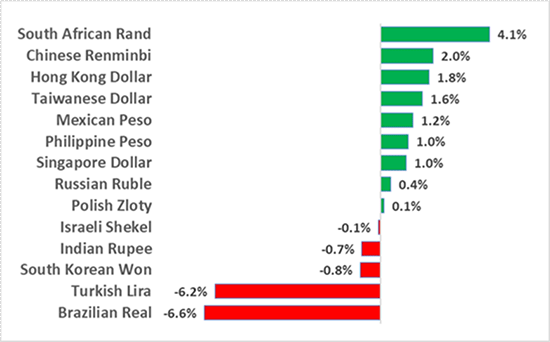 Bloomberg
*Israel, Taiwan and South Korea are no longer classified by the IMF as Emerging or Developing Market countries, they are now classified as Developed Markets.2 They are included here for comparison purposes.

Several themes are driving the value of the ZAR higher:

A trifecta of bullish factors is driving strong demand for the ZAR:

Equity traders look past South Africa’s slow vaccine rollout. South Africa has one of the slowest vaccine rollouts in the world – less than 1 person per 100,000 have been vaccinated.4 Balancing that, investors see a bright future for the country’s economy – South Africa’s TOP40 stock index is up 15% YTD, well above the S&P 500 (+%10), Euro Stoxx 50 (+12%) and China’s Shanghai Composite (-2%). 5 Caution remains, however, as Moody’s may downgrade its already below investment grade BB- rating for SA sovereign debt next month. 6

China and US are South Africa’s top two trading partners. South Africa benefits from having two of the largest economies in the world as trading partners. Both China and the US are planning extensive infrastructure programs, requiring massive amounts of natural resources and iron ore, steel, platinum, diamonds, and gold are SA’s top export products.7 The South African rand is considered a so-called “commodity currency,” as it typically correlates highly with raw material prices.

The technicals: The USD/ZAR is trading around key support at 14.50 for the third time this year. In January and February, it traded at or slightly below that level, but both times it bounced hard, soaring up to 15.50, before heading lower. The currency pair is currently trading at 14.42, slightly below 14.50, its lowest level since January 2020. The next key support area is 13.80-14.00. 8

Positions in the ZAR may be stretched, particularly as the USD/ZAR trades around the key 14.5 level. Nevertheless, in anticipation of a global recovery and attendant development in US and China, both real and speculative demand for the ZAR is expected to remain strong. Despite vaccination issues in South Africa which could slow economic growth this year, global investors/speculators like what they see in South Africa. The country is an important destination for “reflation trades”, “carry trades” and commodity plays, outweighing any perceived political instability.

Yield divergence in US vs. UK 2-year bonds can impact the exchange rate between the GBP and the US dollar