The COVID-19 pandemic has changed nearly every aspect of our lives, from how we communicate, to how we work and live. It has drastically altered dynamics in the innovation economy by slamming shut the IPO window for tech companies (only recently starting to show signs of life) and skewing the venture capital landscape toward established funds and later-stage, well-capitalized companies. In addition, it has exaggerated underlying trends in venture with market leaders increasing their share of total investment while early-stage startups (especially those raising a Series A) struggled.

Demand for debt skyrocketed in 2020 — with everyone from VC-backed tech startups to multibillion-dollar behemoths tapping the debt markets. Interest rates fell back to historic lows as central bankers around the globe dramatically eased monetary policy. This, coupled with a tougher equity fundraising environment for some, yielded a perfect opportunity for debt to shine.

Within the startup ecosystem, private companies were quick to draw down on existing debt lines when the pullback hit, as well as open new debt facilities to extend their cash runway.

Our proprietary data showed all stages increasing the number of months of cash runway with each successive quarter. Later-stage companies (defined here as companies with annual revenue run rates of $50M+) saw the biggest extension, with the median rising by ~87% compared to the previous year. There are several factors at play here. Part of this is explained by investors updating their traditional “rule of thumb” advice for cash runway, from 12 to 24 months. Additionally, as investors have doubled-down on market leaders (at the late-stage), those companies have received the lion’s share of investment, in some cases outpacing any economic hit they may have experienced. Lastly, a mix of companies have flourished under the new normal and seen their bottom line improve. This has been driven both by a jump in top line revenues due to increased demand as well as lower operating expenses as companies quickly reduced payrolls and benefitted from lower Travel & Expense and real estate costs.

With the need to boost reserves and extend the runway amidst the uncertainty, SVB has seen debt utilization jump across our tech and healthcare portfolios — with utilization rates rising roughly 10% at the start of the pandemic. Since then, utilization rates have leveled off due to newly secured equity financing, a realization that the worst-case scenario was not coming to fruition, and a surprise to the upside on top line growth for some, which ultimately extended the runway. 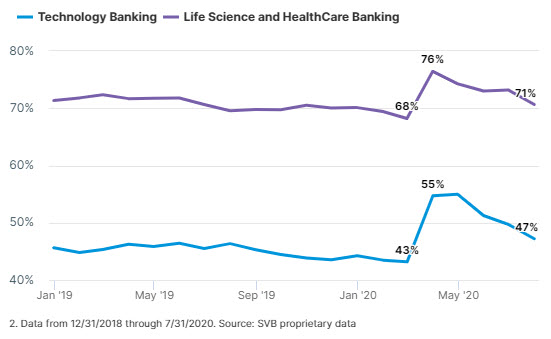 We also saw debt spike in the public markets, with corporate convertible debt issuance hitting a record in Q2 2020. From April to June, the convertible market saw more than $57B of issuance — 366% higher than Q2 2019. Issuance in May alone was approximately $21B, the highest monthly total since the 2008 financial crisis. This helped push overall H1 2020 issuance to $67B — 177% higher than the same period last year.

The second quarter for tech converts was also a record, as issuance peaked at $22B (274% higher than Q2 2019). Combined with the first quarter, this put H1 2020 for tech at $27B (193% higher than H1 2019). High-profile companies such as social media platform SNAP and a number of unicorns from the 2019 IPO cohort headline the long list of tech companies that tapped the debt markets in Q2 2020 — this on the back of a strong Q1, in which heavyweights like Square, Twitter and Ring raised $1B each. Momentum has continued entering the final month of Q3, highlighted by notable raises from companies like Wayfair, Nutanix, Envestnet and more.

Despite the lofty figures, it’s worth mentioning the different motivations behind the raises that led to the boom in convertible debt. Some of the rise in issuance was due to “rescue financing” for companies that were disproportionately affected by the economic downturn. Look no further than the travel and leisure industries, with American Airlines and Royal Caribbean issuing $1B each in June, Southwest Airlines’ $2B issuance in April and Carnival Corporation’s $1.8B issuance in March.

Another reason for the surge is that companies are proactively tapping the debt markets to shore up their balance sheets, whether to extend their cash runway or build a war chest for future acquisitions. If valuations begin to fall to more normalized revenue multiples or P/E ratios, it could be an opportune time for would-be acquirers to add talent, technology and customers at bargain prices. Finally, several converts were raised by serial issuers, looking to capitalize on favorable terms to lower their borrowing costs and extend maturities.

The larger tech deals in Q2 were opportunistic, as companies capitalized on high stock prices and low yields to issue new debt. Palo Alto Networks and Okta each raised $1B+ in June, with ultralow yields of about 0.375% compared with companies that issued due to “rescue financing” that had interest rates in the low double digits.

Additionally, the convert market benefitted from VC-backed tech companies that went public with low levels of debt and sought to add leverage to their balance sheet. For VC-backed tech companies that have gone public since 2018 and raised debt in Q2 2020, the median debt-to-equity ratio was 9.3% (as of Q4 2019). Post-debt raise, that same cohort boasted a median debt-to-equity ratio of 71.1% (as of Q2 2020), highlighting the sheer scale of debt raised on a company-by-company basis. 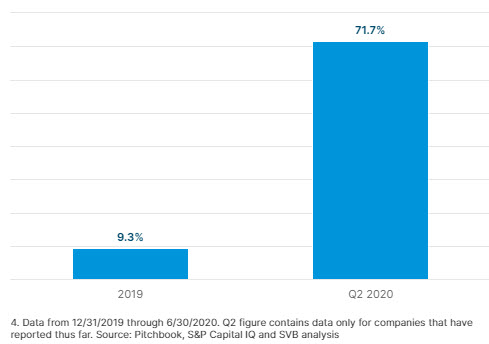 Lastly, companies are simply taking advantage of the strong investor demand for the hybrid securities. So far in 2020, the converts market has been one of the best-performing asset classes, with the iShares Convertible Bond ETF (as a proxy for converts) outperforming the S&P 500 by +25% through the end of August. There has been near insatiable appetite for converts due to the confluence of low interest rates (which, with the Fed’s recent announcement, are likely to stay low for many quarters) and a perception of Tech being a good bet for outsized growth during and post-recession. Mix in market volatility, which makes the convertible product attractive to hedge funds, and sky-high public equity valuations and this has created a Goldilocks scenario for convertible debt.

Looking forward, there are competing viewpoints for how the rest of the year will play out. Some think that many of the issuers who needed to raise capital have done so already, and coupled with a muted M&A outlook, this paints a scenario where there are fewer motivating factors for issuing debt. The flip side of the argument is with prolonged low interest rates, strong performance of tech and reengagement from sellers who hit the pause button due to the pandemic, convertible debt issuance will continue its current momentum. At Silicon Valley Bank, we work with all participants across the ecosystem. If you want to learn more about our perspective and how we can help you thrive as a founder, investor or executive, let’s connect.

Written by
Bob Blee
Bob Blee heads SVB’s Technology Corporate Banking Division, which leads the bank's relationships with public and late stage private companies in the U.S. Tech Sector.
Sign up for insights from across the innovation economy
Subscribe now