October is known to be marked by dramatic moves in the financial markets. This year the equity markets hit the skids in a big way. Except for Brazil, each and every country’s equity index was in the red.

Investors rushed out of equities and into the safety of the US dollar, pushing the dollar index (DXY) to its best monthly performance in nearly two years. Yields on 10-yr Treasurys reached 3.23 percent in the first week of October, dipped as low as 3.08 percent a few days ago, recovering to 3.15 percent yesterday.1

It's too early to tell if movement in the equity markets is simply the "October Effect," or if it marks the beginning of something new and unsettling. For years, investors have been hugely successful by sticking to the fundamentals and ignoring geopolitics, while the stock market "climbed a wall of worry." Now, uncertainty related to geopolitics may finally have taken hold of the investor psyche in the equity markets.

The ongoing US/China trade war. China’s economy has yet to be fully impacted, but its economy grew by only 6.5 percent for Q3 y-o-y, setting its slowest pace since 2009.2 US tariffs imposed in late September and more tariffs due to be implemented in January could have a potentially significant impact.

FX traders may test RMB7. Marching higher nearly every day for the last six months, the USDCNY rate currently trades at 6.9750 (Oct. 31), a gain of nearly 9 percent during that time.3 If China’s central bank chooses not to intervene in the FX market to prevent a weakening yuan beyond the RMB7 level, then traders will assume that a much higher dollar rate is acceptable and drive it up accordingly. We’re watching closely.

The Italian budget increases odds of default. Italy submitted its 2019 spending budget to the European Commission, which promptly rejected it.4 Traders pushed Italian bond yields up nearly 40 basis points to 3.68 percent5, raising the chances of Italy defaulting on its sovereign debt. While the chance of Italy leaving the EU remains low, that turn of events would be catastrophic for the EU.

Midterm US elections. A blue House and red Senate are the expected outcomes, which should have little effect on the currency markets. Any other result from the midterm elections would be largely unexpected, and could potentially unsettle the stock market and the dollar.

Odds for a “no deal” Brexit are increasing. The UK is set to leave the EU on March 29, 2019. Current betting odds give a 40 percent chance6 that there will be a “no deal” or "hard" Brexit, meaning a transition without firm trade, customs, and regulatory measures in place. The S&P rating agency has come out with a warning that a long, albeit moderate recession in the UK would follow a "hard" Brexit.

Go to Top
What happened

ECB and US Treasury withdrew liquidity. In early October and according to plan, the European Central Bank reduced its monthly net asset purchases (QE) to €15bn from €30bn, and plans to end the program altogether at year-end.7 In Q4, the US Treasury will borrow $425bn, the largest quarterly amount since 2009, and will issue a total of $1 trillion in 2018, as higher government spending and slack tax revenues push our budget deficit higher.8 Interest rates here and abroad are headed higher.

Brazilians shifted to the right. On October 28, Brazil moved to the political right by electing Jair Bolsonaro as its President. His predicted victory, and his business-friendly platform attracted investors worldwide, helping to drive the Brazilian stock market up by 20 percent and the Brazilian real up by 9 percent in the October alone.10

German by-elections delivered a blow to Merkel. On October 28, voters in the prosperous German state of Hesse shifted from the center to the fringes. The far left Green party and far right Alternative for Germany both received healthy percentages of the votes. Although they will not be invited to form a government, they will be formidable opponents within the legislature and to Chancellor Merkel’s CDU/CSU and a Social Democrat coalition. Merkel promptly quit as CDU party leader, helping fuel a sell-off in the euro.11 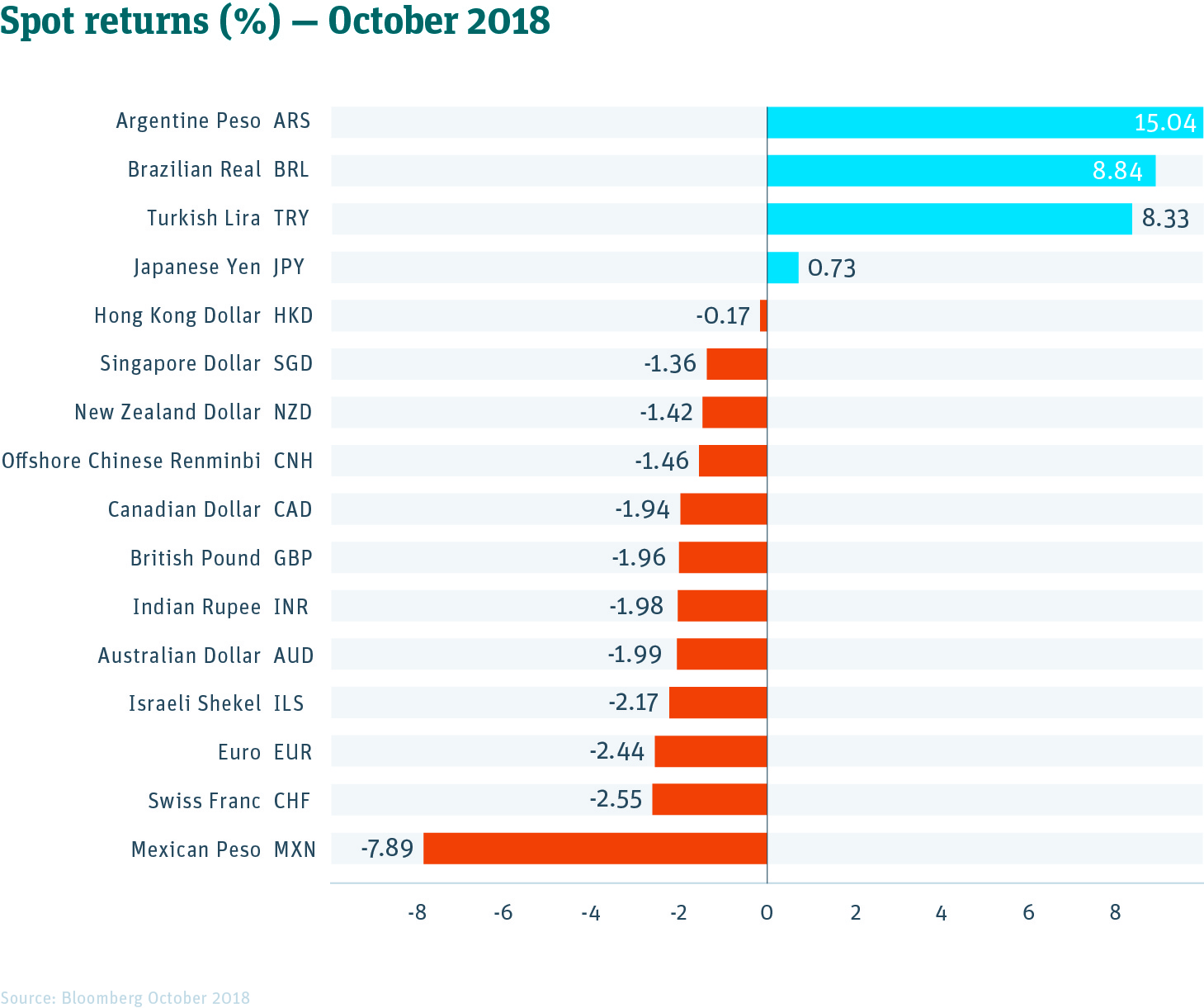 Dramatic moves in financial markets can make protecting your business more complex. Leverage the expertise of SVB’s FX team, recently ranked by Bloomberg as the fourth most accurate FX forecaster in the world.4 Our highly skilled FX team can give you the information and ideas you need to protect and grow your international business in turbulent times.

Learn How Currency Movement Can Affect Your Global Business.
Read our China currency manipulation analysis.
Explore all the tailored services SVB offers for your foreign exchange needs.
Subscribe to our Daily FX Updates to have FX news delivered right to your inbox.

Bloomberg Q3’ 2018 FX forecasters are ranked based on three criteria: margin of error, timing (for identical forecasts, earlier ones received more credit) and directional accuracy (movements with the currency’s overall direction). The rankings which were based on Bloomberg’s foreign exchange forecasts (FXFC), were for forecasters who provided forecasts for Q3’ 2018 in at least three of the four preceding quarters but no later than one month prior to September 30, 2018.